Need 16TB drives for your NAS?

Seagate has confirmed that they are actively shipping 16TB Helium-filled hard drives as part of their Exos X16 family, delivering insane levels of storage without resorting to singled magnetic recording technology or implementing new technologies such as HAMR (Heat Assisted Magnetic Recording).

On top of their already shipping Exos X16 drives, Seagate has also confirmed that their IronWolf and IronWolf Pro lineups have also been updated with new 16TB offerings, enabling consumers to create NAS devices with 16TB HDDs. That's a lot of home storage.

Moving forward more and more data will be held in the cloud, creating the need for larger and larger storage devices. Seagate estimates that the world's storage demands will grow from 33 zettabytes in 2018 to 175 zettabytes by 2025, with Seagate's 16TB Exos drives being the largest HDDs that are available on the market today for high availability use cases.

Seagate's Xeon 16TB HDD ships with an MSRP of $629, which is $39.31 per terabyte. The mainstream availability of these drives starts today on June 4th. Expect these drives to appear at retailers soon. 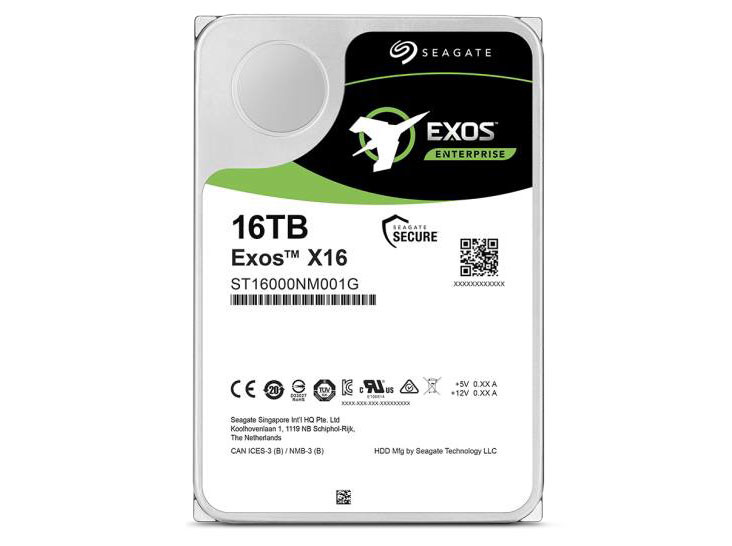 Moving forward, Seagate will rely on HAMR to create larger and larger storage devices, applying heat to their storage medium to enable finer lasers to embed data streams onto hard disks. This technology is expected to drastically impact how much storage is possible within a single HDD platter, enabling larger drives with capacities which are expected to extent to over 30TB in 2022 and over 100TB in 2025/26.

You can join the discussion on Seagate's 16TB Exos and IronWolf hard disk drives on the OC3D Forums.