Seagate paints a bright future of HDDs with an ambitious Roadmap - 100TB HDDs in 2030!

HDDs aren't going to get replaced by SSDs in all markets

Seagate paints a bright future of HDDs with an ambitious Roadmap - 100TB HDDs in 2030!

Big data calls for larger storage drives, and Seagate plans to deliver them. In 2026, Seagate now plans to ship HDDs that are over 50TB in size, and in the longer term, Seagate plans to launch hard drives that offer 100TB capacities.

Seagate believes that the HDD market isn't dying, as data centres are crying out for larger amounts of storage and increased storage densities. Yes, SSDs are replacing HDDs within many areas of the consumer market, but SSDs are too expensive to meet the needs of the enterprise market.

With the launch of their first HAMR drives, Seagate has started a journey towards ultra-high capacity HDDs. Seagate has created additional technologies that will allow its users to achieve higher storage densities while maintaining IOPS/TB performance characteristics to complement their increasing storage densities. Seagate's focusing on storage density and performance, and that's why they expect HDDs to survive well into the future.

Having a 100TB HDD may sound great, but such high capacities demand an increase in HDD read/write/IOPS performance. Users need to access the data within their drives, which is why Seagate has pioneered their MACH.2 multi-actuator HDD technology.

In simple terms, MACH.2 allows Seagate to operate two independent actuators inside of their HDDs, doubling the drive's potential I/O performance. This allows Seagate's MACH.2-enabled drives to deliver performance levels that are much higher than traditional HDDs by accessing data in a more parallel fashion. With MACH.2, Seagate is trying to enable the IOPS performance of two HDDs within a single enclosure, which is great news for enterprise users that require specific IOPS/TB values for their HDDs.

With their HAMR technology pushing capacities higher while MACH.2 increases IOPS performance, Seagate believes that they can remain ahead of their rivals within the HDD market and keep HDDs relevant, despite the rise of SS storage. 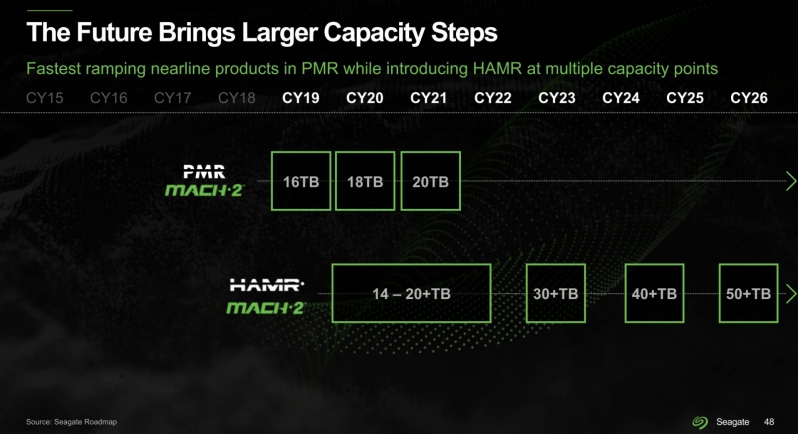 Moving forward, Seagate has plans to create single HDD platters that can hold 10+TB of data, and this will allow the company to develop 100TB+ HDDs. By changing their HDD media to create an "ordered-granular" surface, Seagate plans to develop HDDs with capacities over five times higher than today in 2030.

With HAMR, Seagate has created HDDs that can write data onto smaller areas of HDD media, but by controlling the properties of their HDD media, Seagate plans to push HDD capacities to all-new heights. 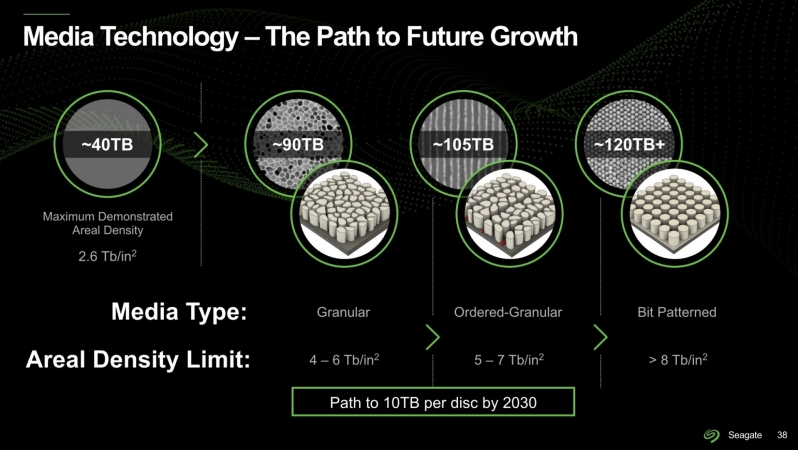 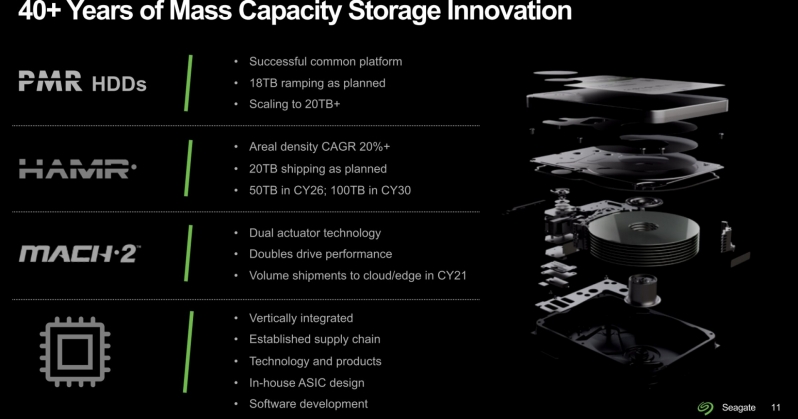 In the future, Seagate sees itself shipping HDDs with larger capacities and ship more Exabytes of date per year well into the future. While this may be an optimistic goal, it is hard to deny that the world's demand for data will continue to increase for the foreseeable future, especially as more data moves to the cloud. 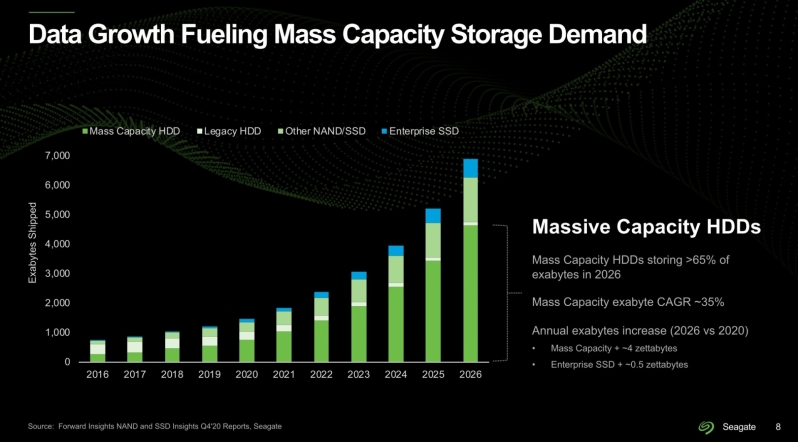 While SSDs are killing off HDDs inside consumer laptops and mainstream desktop systems, HDD storage is nowhere near the end of its lifespan. Until SSDs can deliver more storage per dollar spent, HDDs will remain relevant for certain workloads, and it is unlikely that SSD storage densities will grow at the same rate as Seagate's planned HDD roadmap.

You can join the discussion on Seagate's planned HDD roadmap on the OC3D Forums.