While the consumer HDD market is struggling in the wake of affordable SSD storage, the need for enterprise-grade HDDs has never been greater. Big data needs bigger storage, and HDDs remain at the top in terms of price/capacity.

By 2026, Seagate plans to release a 50TB HDD, which will come thanks to Seagate's HAMR (Heat Assisted Magnetic Recording) technology. HAMR will quickly drive the capacity of HDDs upwards by allowing more data to be stored on each of the drive's storage platter. With HAMR becoming production-ready, HDD capacities will start to increase rapidly.

Alongside their HAMR-based HDDs, Seagate also plans to launch drives with Multi-Actuator technology, allowing their future drives to offer increased performance levels (IOPS) by utilising several independent actuators. This change will parallelise Seagate's future drives to deliver increased read/write performance. This technology should allow IOPS/TB metrics to remain the same as today's drives, despite the increase capacities provided by HAMR.

Below is a comment from Seagate's CEO, Dave Mosley;

As drive densities increase, multi-actuator technology is required to maintain fast access to data and scale drive capacity without compromising performance. We generated revenue from our MACH.2 dual actuator solutions for the first time in the September quarter. We are working with multiple customers to qualify these drives, including a leading US hyperscale customer, who is qualifying the technology to meet their rigorous service level agreements without having to employ costly hardware upgrades. We expect to see demand for dual actuator technology to increase as customers transition to drive capacities above 20 TB. 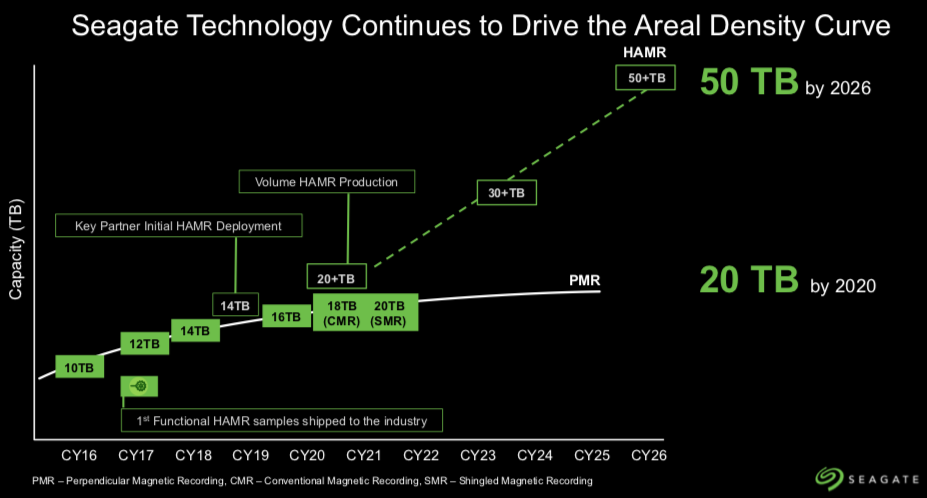 The HDD market is rapidly shifting towards the enterprise market, with the need for low capacity consumer drives dwindling while the storage needs of datacenters continue to increase. Seagate is working on both the performance and capacities of its future drives to meet the needs of tomorrow's customers. Still, it is becoming clear that these technologies have not been made with the average consumer in mind.

You can join the discussion on Seagate's plans to create 50+ TB hard drives by 2026 on the OC3D Forums.