HAMR will bring about the future of HDD storage

Seagate has confirmed that their first 20TB HAMR-based HDDs are due to ship this December, allowing the company to push past the storage density limitations of traditional HDD technologies.

While 20TB drives are larger than any of today's HDDs, these capacities are far from the potential limitations of HAMR. In 2026, Seagate plans to release 50TB HDDs, offering a 150% increase in storage density over this year's already impressive 20TB HDDs.

How does HAMR work?

Heat-Assisted Magnetic Recording is not a new concept, using a small laser to heat an HDD so that weaker magnets can be used to write to the drive's surface, allowing data to be imprinted on a smaller area, therefore increasing the capacity of an HDD.

The downside of this technology is that constantly heating the surface of an HDD will reduce the strength of each of the drive's hard disk. Reliability is the main factor which prevented HAMR HDDs from hitting the market, but Seagate seems confident that they have mitigated these issues. 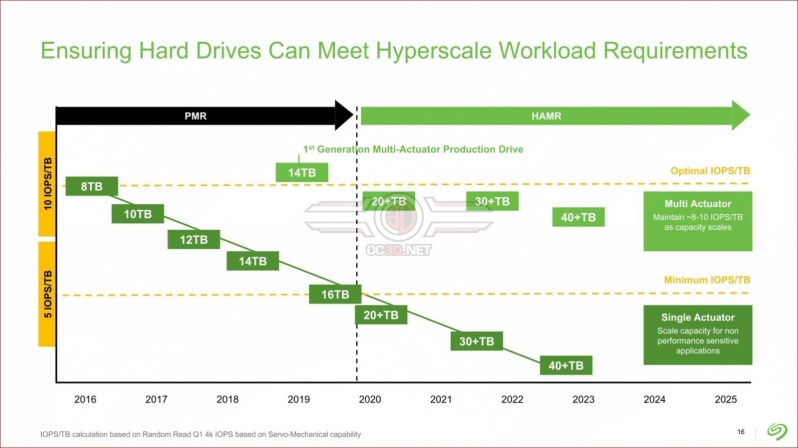 Alongside HAMR, Seagate also plans to release multi-actuator MACH.2 HDDs, enabling faster read/write speeds by adding parallelism to their HDDs. With MACH.2, HDDs can feature to independent actuators for read/write operations, allowing a doubling or potential IOPS per drive. This technology is vital for Seagate, as it allows the company to maintain high levels of IOPS/TB with their drives, a key characteristic given HAMR's promised density gains.

Seagate's deployment of HAMR and MACH.2 HDDs will be critical for the company, as they will need to showcase that both technologies are reliable as they prepare to combine both techniques into a single product. At this time it remains unknown how long it will take before we start to see Multi-Actuator and HAMR-based HDD in the mainstream market, as right now both technologies are ideally positioned to target the enterprise market.

You can join the discussion on Seagate's plans to ship 20TB HAMR-based HDDs in December on the OC3D Forums.