An M.2 heatsink that weighs around 20 grams

One of the most sought-after items for users of M.2 SSDs is a heatsink, offering the dual function of covering up the device's PCB to provide a cleaner aesthetic while also allowing the device to deliver lower operating temperatures under load.

In the past, premium M.2 NVMe SSDs have been shown to thermal throttle under sustained loads, though these kinds of loads are rare outside of SSD-benchmarks or stress tests. To see much thermal throttling in the real world users would need t run their SSD under full load for a significant amount of time, likely rewriting the whole drive several times in the process, making the thermal issue of little concern to all but the most hardcore of use cases.

Even so, users do enjoy the peace of mind an aftermarket heatsink can bring, as well as the pleasing aesthetic offered by today's heatsink designs. SilverStone has taken their design seriously with their TP02-M2 cooling solution, providing a lot of surface area to dissipate heat from M.2 SSDs. 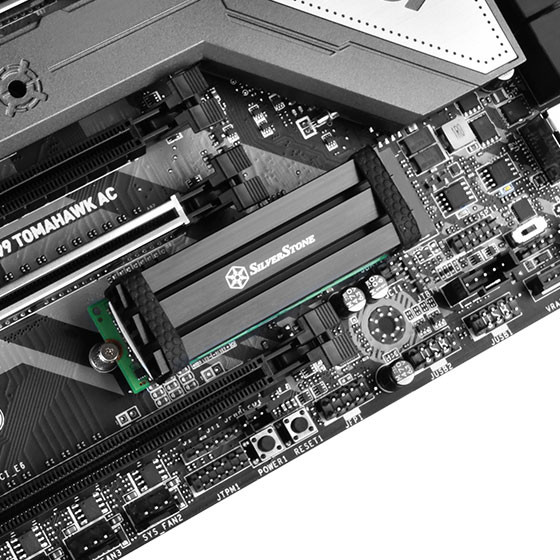 Instead of offering a clip-based mounting solution or relying on adhesive thermal pads (which can make M.2 heatsinks difficult to remove) SilverStone has instead decided to take a more simplistic approach, using two silicon elastic straps to mount their SSD heatsink. This design makes the install/disassembly process straightforward, though some users will no doubt prefer a more complex mounting solution.

At this time, SilverStone has not announced the pricing or release date of their new M.2 heatsinks.

You can join the discussion on SilverStone's TP02-M2 M.2 SSD heatsinks on the OC3D Forums.

Avet
Wonderful heatsink design and they give you rubber bands to tie it. And they are ugly as bonus. Why not give zip ties if you wanted to cheep out? Another great design ruined by accountants. Like their goal was to fail. And they do have lips on the side for clips like EK, and Aquatuning.Quote

Dawelio
I agree with Avet, great design but that is a very ghetto and cheap looking mounting solution.Quote

ByteMyAscii
Yes, it does look a bit tacky with that implementation of the rubber bands.
Far more compatible solution than the fan blowers though, which with the small diameter of the fan I can't see being quiet with any moderate throughput.Quote
Reply