This enclosure supports both SATA and NVMe M.2 SSDs

Most M.2 SSD enclosures are restrictive in nature, as they typically only support one type of M.2 SSD. SilverStone's Raven RVS03 SSD enclosure has added some much-needed versatility to the market by supporting both SATA and NVMe M.2 storage drives and 2230, 2242, 2260 and 2280 M.2 SSD form factors.

Through USB 3.2 Gen 2 Type-C, SilverStone's Raven RVS03 enclosure can deliver storage speeds of up to 10Gbps with fast enough SSDs using its RTL9210B-CG controller. That said, SATA-based M.2 SSDs are limited to 600MB/s, the speed limit of the SATA III standard. Please note that this drive does not support AHCI M.2 SSDs.

Unlike many other M.2 SSD enclosures, SilverStone has opted to create their RVS03 M.2 enclosure with a tool-free installation process, allowing users to replace the SSD within the storage device easily. The device measures in at 105.7 mm x 35 mm x 13.5 mm (LxHxW) and a weight of 52.2g without an SSD installed.

With a single cable for power and data transfers, the Raven RVS03 should be an easy storage solution to utilise, assuming that users have a spare USB Type-C connection on their PCs. USB 3.2 support and a fast SSD are required to achieve this enclosure's maximum levels of storage performance.

Sadly, SilverStone has not revealed the pricing of their Raven RVS03 M.2 SSD enclosure or revealed when the enclosure will be released publically.

You can join the discussion on SilverStone's Raven RVS03 M.2 SSD enclosure on the OC3D Forums. 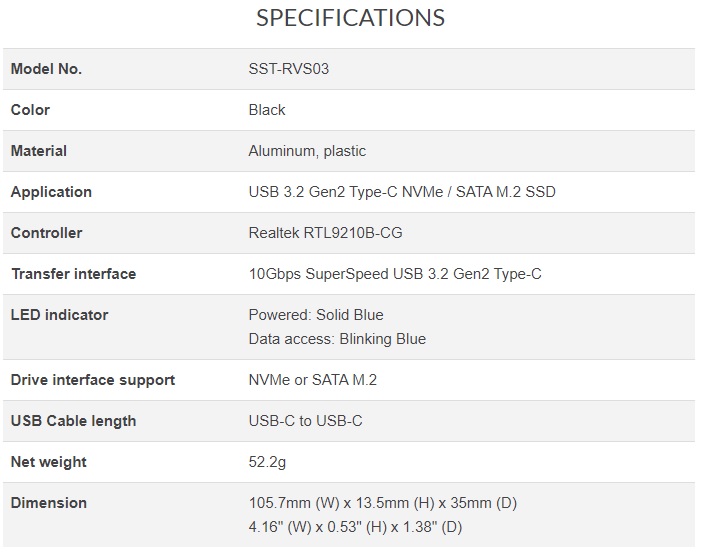 looz
I don't really see the value in toolless installation as I've always got screwdrivers handy, but I like these nVME enclosures.Quote
Reply