Right now it looks like M.2 NVMe SSDs are the way forward, offering enhanced speeds over their SATA counterparts while having a lower CPU overhead.
Not all PCs have M.2 slots, leaving many with the need to upgrade to today's latest hardware in order to take part in the coming NVMe revolution. Thankfully SilverStone are here with a neat new accessory which will provide existing PCs with two new M.2 SSD slots, coming in a handy half-height PCIe form factor and providing two PCIe 3.0 x2 powered M.2 slots.

This add-on card uses 4x PCIe 3.0 lanes to power two dual-lane M.2 slots, each of which offers maximum speeds of around 2GB/s. Additionally one of these two M.2 lanes also has support for SATA based M.2 devices, though this will need to be connected to your motherboard using a SATA cable. 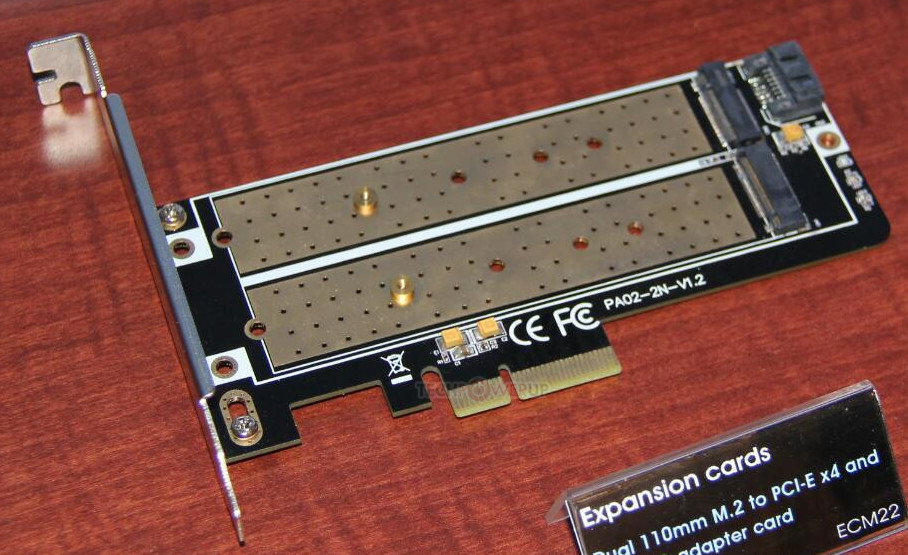 This card has no native logic, simply using power from your PC's PCI lanes to power devices and to relay data from your M.2 devices to your system via PCIe using NVMe or using AHCI though SATA.

SilverStone's ECM22 add-on card will support two M.2 devices that are up to 110mm long, covering almost all existing M.2 SSDs that exist today. This will be very handy for those that require a lot of ultra-fast NVMe storage, with video editors and other creative professionals finding the most benefit.

You can join the discussion on SilverStone's ECM22 dual M.2 add-on card on the OC3D Forums.

Chopper3
Seems a little compromised, if it were an 8 lane connector and supported 2 x 4 lane PCIe NVMe m.2 slots then that would allow you to essentially 'roll your own' Intel P3608 card - as that's not far off what that £3.5k part is. It would allow for >5GBps peak seq reads and I can't imagine would cost much more to make.Quote
Reply