Silicon Motion is charging into the high-speed NVMe market

2018 is set to be a good year for Solid State storage, with NAND supply being expected to increase in the second half of the year and a range of competitive NVMe SSD controllers become available.

Today there isn't much competition in the high-end NVMe SSD market, with both high pricing and a scarcity of supplier keeping the average PC builder from investing in ultra-fast NVMe storage.

Taipower, a Chinese SSD manufacturer, has announced their new NP900 M.2 NVMe SSD, which will utilise Silicon Motion's new SM2262 controller to achieve sequential read/write speeds of 2685MB/s and 1695MB/s in the AS SSD benchmarking utility. While this SSD is not expected to hit the US and European markets in significant numbers, it does give us an idea of what to expect from NVMe SSDs at CES 2018.

Silicon Motion supplies controllers for a wide range of SSD products, with their new SM226X series being set to take 2018 by storm with a variety of new products. Combine this with the use of new generations 3D NAND technology from manufacturers we can expect to see some exciting SSD offerings within the next few weeks. Silicon Motion has already named ADATA, Intel, Sandisk and Crucial as partners, leaving many to expect an influx of new SSD models. 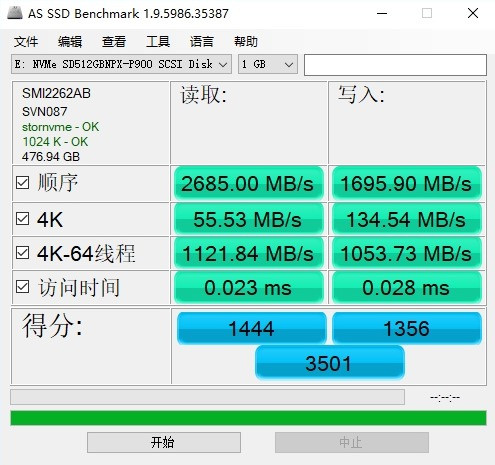 Silicon Motion's new NVMe SSD controllers are designed to cater to both the high-end and low-end of the NVMe SSD market, delivering speeds that are much faster than any SATA model while offering price ranges that will be a lot more palatable than some of today's NVMe offerings.

You can join the discussion on Taipower's NP900 SSD and Silicon Motion's SM2262 controller on the OC3D Forums.

RobM
I just wish they would make them more affordable, still ludicrously priced compared to spinnersQuote

Dawelio
Quote:
True, but at the same time ludicrously faster compared to spinners as well