Will your next PC have a diamond inside?

Adamant Namiki Precision Jewelery, a company based on Tokyo Japan, has created a mass production technique that they can use to create 50mm wide diamond storage wafers, and these wafers have an insane amount of storage potential.

These diamond storage wafers are said to be able to store the same amount of data as 1 billion Blu-ray discs. Assuming that these discs are standard 25GB Blu-rays, that's 25 exabytes of data. To put it another way, that's 25 billion gigabytes of data.

Adamant Namiki Precision Jewelery's Press Release about these diamond storage wafers states that they "will establish peripheral technologies and commercialize them in 2023", implying that they have methods that can read and write data to their diamond wafers. However, it remains unknown how quickly data can be written or read from these crazy dense storage wafers.

Whether or not these diamond wafers have a future within the data storage market remains to be seen. At this time it is unknown how quickly data can be read or written to these wafers, and those metrics are incredibly important when it comes to data storage. Perhaps we will all have diamond disks in our pockets for storing our personal data in the future, or we will store our entire gaming libraries within a diamond at the centre of our PCs. Probably not, but we can dream.

We have included Adamant Namiki Precision Jewelery's press release on their diamond storage wafers below. However, we will note that this press release has been machine translated from Japanese, so expect inaccuracies in its translation. You can read the original press release here. 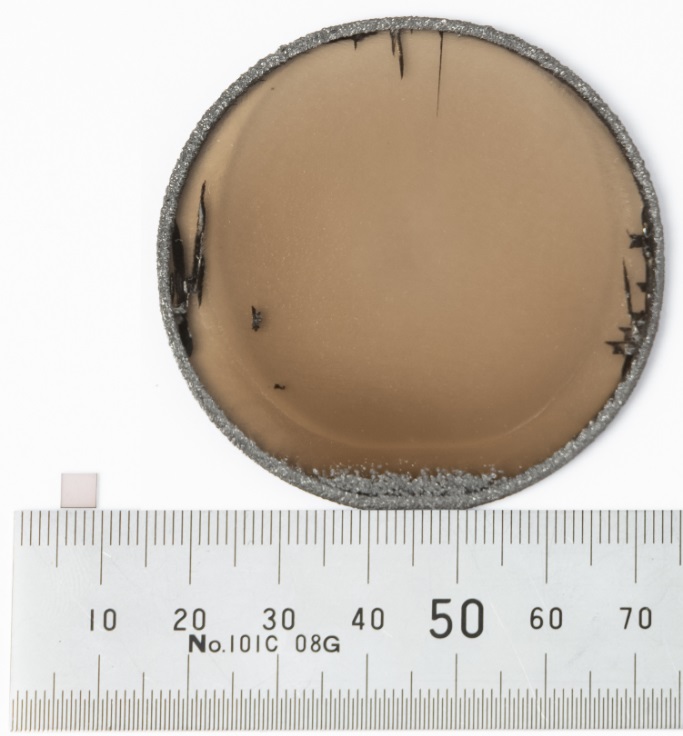 Adamant Namiki Precision Jewelery Co., Ltd. (Adachi-ku, Tokyo, President Ryako Namiki) has developed a mass production technology for ultra-high purity diamond wafers with a diameter of 2 inches. Quantum memory used in quantum computers  and ultra-high-sensitivity magnetic sensors use ultra-high-purity diamonds with a nitrogen concentration of 3 ppb or less (ppb = 1 billion percent), and development is accelerating. Until then, usable diamond crystals were only about 4 mm square. This time, we have developed a diamond wafer with ultra-high purity and a diameter of 2 inches (about 55 mm). It is expected that it will lead to the realization of quantum computers in the future. This product is scheduled to be commercialized in 2023.

In 2021, Adamant Namiki Precision Jewelery Co., Ltd. developed a high-quality diamond wafer (trade name: KENZAN Diamond ™) with a diameter of 2 inches using a unique step flow growth method in collaboration with Saga University. We issued a press release on September 9th . In this diamond crystal growth technology, nitrogen gas had to be used to obtain a high growth rate, so nitrogen impurities with a concentration of several ppm were mixed into the diamond crystal and could not be used in a quantum computer.

On the other hand, commercially available ultra-high-purity diamonds with a nitrogen concentration of 3 ppb or less have dimensions of only 4 mm square, and even if they could be used for research, they could not be used practically.

Therefore, Adamant Namiki Precision Jewelery Co., Ltd. has developed a mass production technology for ultra-high-purity diamond wafers with a diameter of 2 inches by suppressing the mixing of nitrogen as much as possible through crystal growth. Quantum memory using diamonds can record ultra-high density data, and one diamond wafer with a diameter of 2 inches can store data equivalent to 1 billion Blue-Ray discs. This is equivalent to the total amount of mobile data distributed worldwide in one day, and fits on one diamond wafer.

In the future, we will establish peripheral technologies and commercialize them in 2023.

You can join the discussion on the diamond wafers that have the storage potential of a billion Blu Ray discs on the OC3D Forums.

KingNosser
Just need to win the lotto think one will be enough but i have no idea how or when if ever we'll be able to get one atm i have 15.25tbs with 3 more on the way but just one of these should be enough for my storage needs for the rest of my lifetime

ET3D
Yeah, I imagine they'd be expensive and not aimed at home consumers, but this really would revolutionise archiving.

ImprovizoR
Imagine a home server with one of those bad boys.Quote

Anon
is this the tech where you can't rrase the data written to the crystal?Quote

dazbobaby
Now explain to your boss how you lost that tiny diamond with 25 exabytes of data on it.


I'm sure the actual device will be bigger and much harder to lose.
I read about this in PCFormat back in the early 90's when IBM worked on the technology, they claimed it was due within 10 years. So you know, 20 years later... and it'll be another 10 years.


My questions are:
1. Can you write to it like a typical drive?
2. Can you delete once you have finished with a file? This is kind of moot, I mean 25 exabytes, who's going to fill up that thumb drive?