SDUC cards will offer capacities of up to 128TB!

With SD 7.0, the maximum capacity of SD cards has increased from 2TB on SDXC to 128TB with SDUC, offering forward-looking support for ultra-high capacity applications. Note that SDUC cards can support SD Express if the card in question features the new EX modifier, making both standards inter-compatible and available separately.

What changes with SD Express is that the second row of pins from UHS-II cards is repurposed to support PCIe 3.0 x1 connections, with the new standard utilising the NVMe protocol to offer transfer speeds of up to 985MB/s. This change will allow future SD cards to provide transfer speeds that surpass SATA Solid State Drives, which is an amazing feat given the small form factor of SD cards.

Because of the SD Associations repurposing of UHS-II pins with SD Express, the standard is not backwards compatible with either UHS-II or UHS-III speeds, preventing UHS-II/III cards from accessing their full speeds on SD Express hosts and SD Express cards from saturating UHS-II/III hosts, reverting to UHS104 speeds. 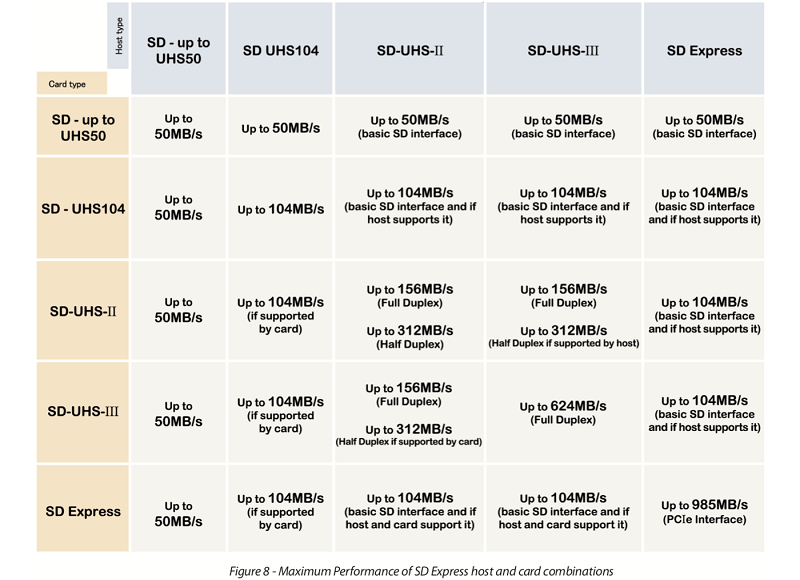 While transfer speeds of 985MB/s seem excessive for an SD card, it is encouraging to see compact storage solutions offer more SSD-like features and increased transfer speeds, especially in an era where 8K video recording is becoming more popular and high-resolution/framerate video is becoming recordable on today's smartphones.

This new standard will provide additional competition in the high-end video production market, though SD Express will also be usable for future mobile computing platforms, games consoles, automotive applications and a wide range of other applications.

You can join the discussion on the SD Association's SD Express standard and its 985MB/s transfer speeds on the OC3D Forums.

NeverBackDown
I hope phones would get this as the main storage. Would really be useful in my opinionQuote