30TB and larger HDDs are coming!

Big data needs big storage, and to have big storage you need big HDDs. In their latest press release Toshiba has stated that data generation is continuing to grow by "double digits" on a yearly basis, creating demand for denser storage mediums. This is especially true for operators of cloud services.

Below is Toshiba's Press Release on their planned 30+ TB HDDs. 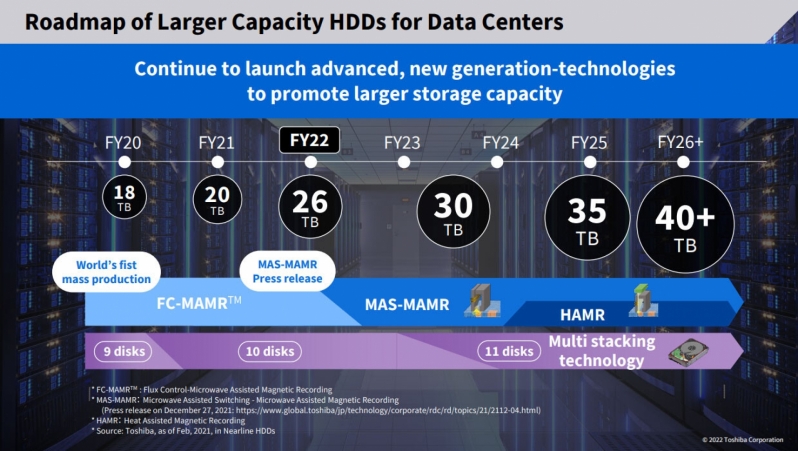 "Toshiba continues to work closely with the cloud companies to understand their exact capacity and performance requirements, and the ability to utilize our next-generation technologies will be key to meeting our customers' needs," said Raghu Gururangan, Toshiba America Electronic Components, Inc. Vice President, Engineering & Product Marketing. "Many years of close collaboration work with our key component suppliers is leading to impactful technology breakthroughs to achieve higher capacities, which ultimately reduces TCO (total cost of ownership) of our Nearline HDDs."

As a global technology company that has been innovating in storage for years, Toshiba offers a comprehensive portfolio of HDD products that address the storage needs of enterprise, datacenter, surveillance, and client markets. Toshiba solves customer challenges with innovative HDD models focusing on four primary market segments. The AL Series focuses on the Enterprise Performance segment; the MG Series is aimed at Enterprise Capacity and Data Center needs; the MQ Series covers the broad spectrum of use cases that require Mobile Client HDDs; and the DT Series addresses the surveillance and traditional Desktop Client use cases.

You can join the discussion on Toshiba's plans to launch 30TB SSDs in the near-term future on the OC3D Forums.

NeverBackDown
Not for consumers but it's crazy to think how HDD tech stagnated for so long once SSDs became more popular then all of a sudden they sky rocket in density and we have 40TB drives planned when a decade ago you'd never think of ever having that.Quote

KingNosser
I started late on PC's tbh but think my first hdd was 40gb drive and that was concidered a lot at the time, would love a 20tb drive at an affordable price thou, i've not checked lately but they are expensive