Stongbox, a creator of High-Performance-Computing (HPC) solutions has combined their system building talents with ASUS to create the world's most powerful 8-GPU rendering machine.

Previously the world rendering record for the Octane Rendering test with eight GPUs was 1498, which was achieved by a system with eight Titan Xp GPUs. Now the company has achieved a score of 1620.82 using a machine with eight ASUS GTX 1080 Ti GPUs.

The GPUs used here are based on ASUS' GTX 1080 Ti Turbo designs, though at this time it is unknown whether or not these GPUs were using custom factory overclocks. The system used in this test was also able to run with GPU temperatures of 51-degrees Celsius under full load, with an ambient temperature of 22 degrees with no air-conditioning.

One other claim to fame for this system is that it comes with a much better price to performance ratio than the Titan Xp based system that previously held world record performance. This is due to the sheer affordability of the GTX 1080 Ti when compared to Titan series GPUs.

Using the Octane Render test – Octane Bench, the Strongbox 8GPU HPC smashed the previous record of 1498 for a Titan XP and a previous high of 1397 for an equivalent 1080Ti machine. Strongbox has taken over the OctaneBench podium with the highest score of 1620.82 and all top three places. Performing the benchmark test proves that our Strongbox 8x GPU 4U HPC has the best bang for buck performance ratio in the world, beating the Titan XP at half the cost. This beast has also been tamed with rock solid stability and GPU temperatures hitting a maximum of 51ºC on full load, in an ambient temperature of 22ºC while breaking the OctaneBench record. 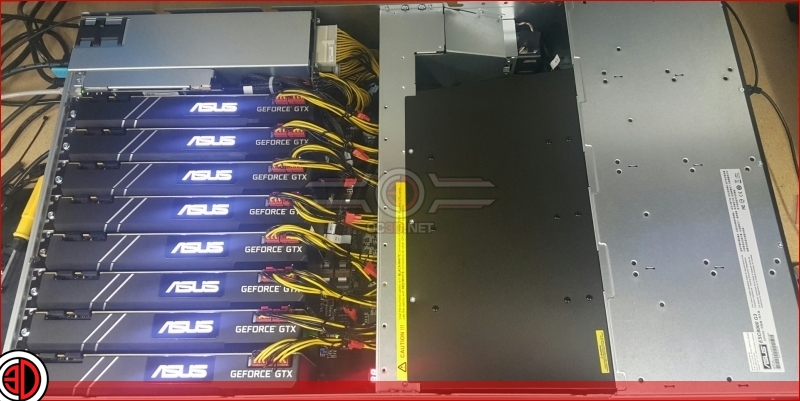 Mere hours after breaking the Octane Render Test world record, this system was installed at Jellyfish Animation in London for 24/7 GPU rendering workloads.

This machine is based on an ASUS-made chassis, motherboard and GPUs. More of these systems are expected to be ordered in the near future for similar workloads. ASUS and Strongbox did not reveal the cost of this world-class rendering machine.

You can join the discussion on Strongbox's 8X GTX 1080 Ti Rendering beast on the OC3D Forums.

WYP
Quote:
It is a workstation, so the fans are likely running at close to max speeds. This is certainly not a consumer-oriented product.Quote

tgrech
I'd be surprised if they had their fans on, the servers fans should push far more air through the top end of the GPU and out through the PCIe slot vents than they'd be able to get through the GPU fan normally.Quote

Darkdayzzz
Quote:
The gpu fans WILL be running at close to max, if not max speed, with the rest of the system. The server fans wouldn't be able to keep it that chilly (51degrees at max load) without the gpu fans helping out cuz of how tight all 8 gpus' are lol.

Just my thought is all...also depends on the air conditioning and temperature in the room its posted in, which like you said would likely be a server room.Quote