Valve's Steam Deck may soon be getting some real competition

AYANEO's $289 Air Plus could be a true Steam Deck rival

AYANEO has revealed a new low-cost PC gaming handheld that has the potential to give Valve's Steam Deck system a run for its money, promising Zen 2 CPU cores and RDNA 2 graphics for a $289 price tag. Those are the same CPU and GPU architectures as Valve's Steam Deck, but at a lower price.

Sadly, AMD has not revealed the full specifications of their Mendocino APU, aside from the fact that the APU is based on TSMC's 6nm lithography node and that it features four Zen 2 CPU cores, RDNA 2 graphics and support for LPDDR5 memory. While many have compared this APU with Valve's custom Steam Deck silicon, AMD has confirmed that their Mendocino APU is a different piece of silicon. As such, it remains to be seen whether or not AMD's Mendocino APU will deliver more or less gaming performance than Valve's custom Steam Deck SOC. 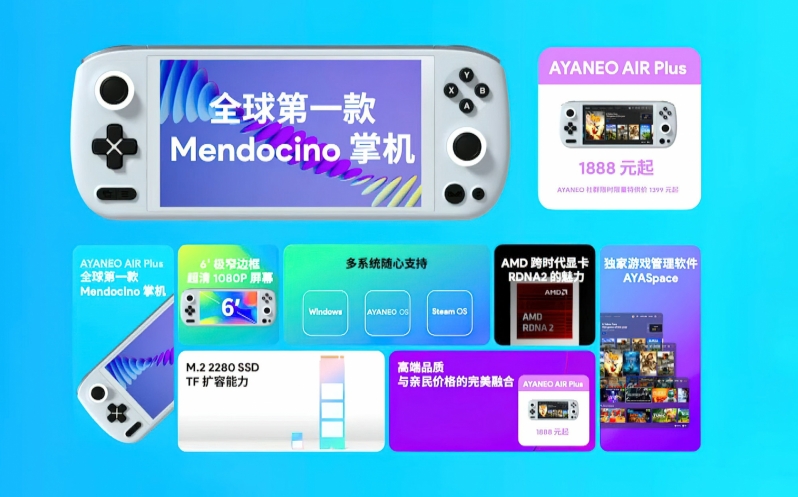 AYANEO's Air Plus system has the low pricing needed to take on Valve's Steam Deck system, and useful features that will make it a more versatile system in many instances (M.2 2280 SSD support is a BIG deal). However, it remains to be seen whether or not the AYANEO Air Plus has what it takes to take on Valve's Steam Deck in terms of gaming performance, and if the hardware itself is capable of standing up to long-term use.

You can join the discussion on AYANEO's Air Plus gaming system on the OC3D Forums.