Just over a year ago, we started giving away custom cases as competition prizes. It's easy to hold a competition to give away a standard system, or an individual part, but we like to differentiate ourselves from the pack by putting a little more effort into the majority of our competitions than other places may do. Our cases have been unique, we've never produced the same one twice, so if you've been a lucky winner you've managed to get your hands on something completely individual.

Since our first competition for one of these cases, we've attracted a lot of attention, and we've seen large numbers of entries throughout all of our competitions over the past year or so, which shows us you lot love the designs of these cases as much as we do. More and more of these cases will continue to come, and we've already got our eyes on a few of the upcoming cases, and they're definitely something to look forward to.

Now, the OC3D office has recently been fully redone. The desks were starting to show their age, but instead of merely replacing them, TTL remodelled the entire room. Along with the desks being replaced, the office has also had the walls repainted, floor reworked, new lighting installed and even a new chair. However, considering the entire room was redone, we couldn't just stop there could we? The Motherboard Test Rig has been updated and now includes one of our custom cases, along with some brand new hardware. TTL gives us a look around this new build which you'll be seeing a lot more of over the next few months! 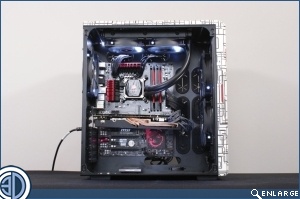 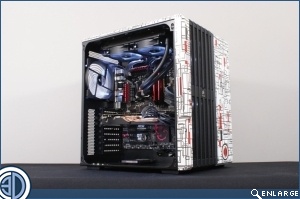 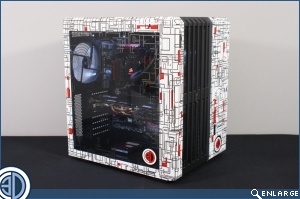 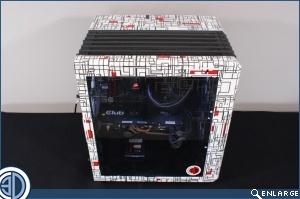 The predominant use of this rig will be to test new motherboards. Test benches are all well and good, but we think for certain things like this, a case gives a more 'user applicable' feel to the reviews and results. Because this is to be used for comparison purposes, the parts chosen inside needed to be reliable, high quality, and also look good since we've got to the effort of custom designing a case for this! We've chosen mainly Corsair parts, as we believe they exhibit all of these attributes, and also bring a theme of continuity throughout the rig.

For power supply, we've chosen the Corsair AX760i. As we all know the AX series can be heavily depended on, and its fully modular design may make life easier if we're swapping in and out motherboards every day. We've also added the Gunmetal Grey modular cable kit to the unit so everything about it looks great.

The Corsair H100i takes care of CPU cooling. We all know how well these perform, and also how popular they are, which makes them the ideal choice for testing different motherboards. Of course in our testing we want to show how capable the motherboards are in overclocking and for that, we'll need a good cooler to do this. With the H100i being a popular choice amongst consumers, it should also give our readers relatively realistic results if they were intending to buy the motherboard in question (dependent on the silicon lottery of course!). For all round case cooling, and also to add to aesthetics, we've used white LED Corsair AF120s and AF140s which look amazing and perform really well, whilst staying quiet.

As CPU memory controllers have improved considerably, we needed a high speed memory kit in order to test whether our motherboards are capable of running that speed, and also if they differ much in performance whilst running at the higher speeds. Corsair Vengeance Pro 2400MHz was an ideal choice as it remains affordable, as well as reliable and good looking.

Next up is the SSD. We chose the Corsair GTX Neutron 240GB, which is a reliable high speed choice that has a large enough capacity to fit all of the benchmark programs that we use. Although the SSD choice won't matter a great deal for benchmarks, it still provides a reliable and fast solution for testing purposes.

Finally for the non-changeable parts, and most likely the part which you're all interested in is the case. The Corsair Air 540 is a great case which offers loads of different options for cooling, and whilst keeping everything such as the power supply and hard drive bays hidden behind the motherboard tray, offers an unrestricted path for airflow to the components that need it. This also means we've got more space to work with when swapping out motherboards, and means we can more or less leave the power supply and SSD untouched whilst doing this. On the floor of the case, we've done away with the HDD bays and placed a sheet of 3mm carbon fibre to give it a sleek look inside. On the outside, we've used motorway grade vinyl to follow a similar design to that which we did on the Borg cube competition case, but this time using different colours and we opted for a white and red theme, which we think looks really good, and we're sure you'll agree!

This rig will serve as the main motherboard test rig for OC3D reviews. The motherboards will be interchanged but the rest of the system will remain roughly the same. Currently, we're running an AMD Club3D 280X graphics card which we've been using for previous motherboard reviews. This will more than likely be swapped for one of the iterations of a GTX 780 Ti when we come to test the next generation motherboards when they finally get released, but for now, the 280X looks great and since we've been using this in the past for reviews we need things to remain consistent for the time being.

Thanks to Corsair for providing the majority of the parts. You can discuss your thoughts on the OC3D Forums.