For the ITX market, we've seen a significant number of barebone PCs and complete systems that will still tempt consumers even when they know how to build the systems themselves. This is mainly because a lot of the hardware used such as a case or heatsink is difficult to find in such a small form factor and so it's difficult to get the desired results of the smallest PC. The ITX barebone systems that we've seen have generally been built from the ground up in order to match the case size exactly to the hardware required, which keeps the overall system as small as possible.

Aside from the larger companies such as Dell offering prebuilt systems, and also companies like PCSpecialist offering prebuilt systems, so far there hasn't been much of a range of small factory built PCs using high quality components to offer great performance. MSI have now announced Nightblade; a barebones system built around a slightly modified Z87I Gaming mITX motherboard, with a custom compact design case, included case fans and also a power supply. This way, you can add your own processor, graphics card and hard drives and have a fully operating high performance system in a more compact size than you could build yourself.

RushKit takes a quick look at the MSI Nightblade: 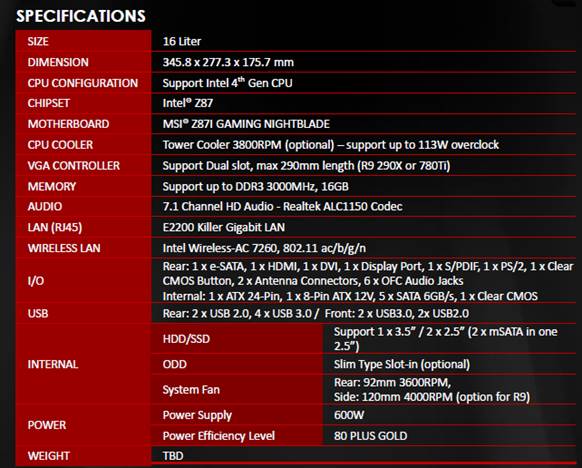 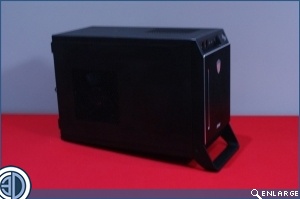 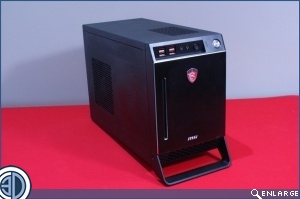 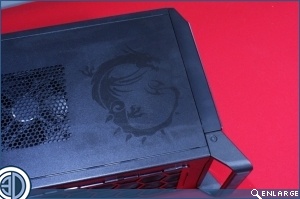 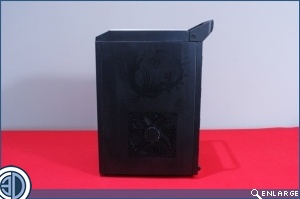 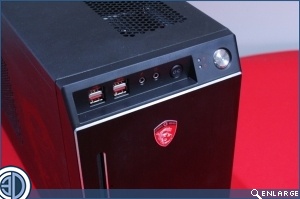 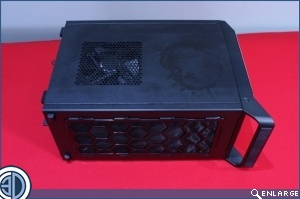 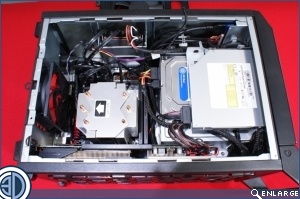 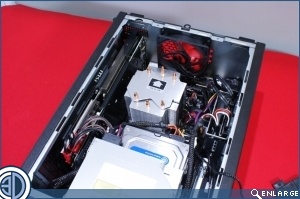 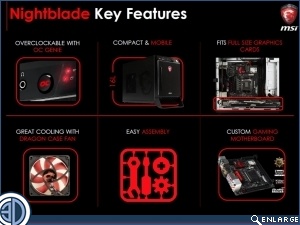 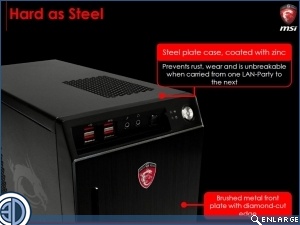 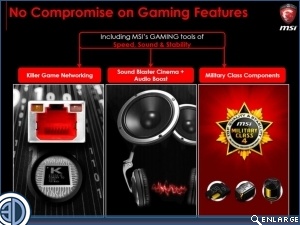 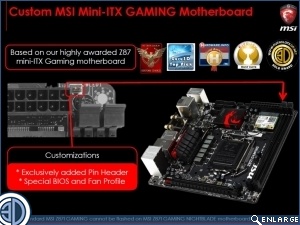 MSI have demonstrated the kind of quality and aesthetics that companies such as Dell are failing to offer. Nightblade offers great looks on the outside, and capabilities for high end hardware on the inside. Our review sample was fitted with and AMD R9 290 graphics card, an Intel Haswell i7 processor along with dual SSDs to show exactly what kind of hardware it's capable of running.

The motherboard itself is a slightly modified MSI Z87I Gaming motherboard. The original offered great performance so we're expecting the same here. The motherboard in Nightblade offers a lot of capabilities to add components such as multiple hard drives. It also offers superior onboard sound with a built in headphone amplifier, onboard WiFi, a Killer E2200 networking solution, along with five SATA ports. For comparison a small form factor Alienware X51 offers far more basic solutions, such as standard Realtek audio, standard networking solutions and very limited capabilities for adding more hardware. This makes the Nightblade look a far better choice for consumers looking for a compact system which offers a lot of power. The motherboard in the Nightblade comes with its own custom BIOS with a built in fan profile and pin header which we assume is to connect the OC button on the front of the case.

MSI have chosen to use a high quality 600 watt Silverstone power supply. This means you'll have enough power to be able to run any single graphics card in the system such as an Nvidia 780 Ti, or an AMD R9 290X. The power supply is also 80 plus gold rated meaning it's incredibly efficient, even whilst keeping size to a minimum. It's a great thing to see MSI have put effort into including a high quality and high capacity power supply with the Nightblade. As the PSU is something that may be a little trickier to upgrade in a system like this, MSI have ensured that you won't need to, regardless of the hardware you choose to run.

Depending on the region you're in, the Nightblade may also come with a custom sized processor cooler which is able to sufficiently cool anything up to an overclocked Intel 4770k, whilst producing less noise than a regular stock cooler. Of course if you want to swap this out, or if Nightblade doesn't come with a cooler in your territory, you can add a low profile cooler of your choice as long as it remains under roughly 115mm. The Nightblade comes with an MSI Dragon case fan installed in the back. This can spin up to 3600RPM which should be enough to amply cool components inside. The case also comes with significant ventilation holes to ensure that you are able to keep a good airflow throughout the system. The graphics card sits in the bottom of the case, and a large ventilation hole here has been placed to improve the air flow, and it also includes a dust filter.

On the front of the case, we see the standard features we'd expect to find; a power button, headphone and microphone jacks, activity LEDs and also four USB ports (2x USB2.0, 2x USB3.0). However, we also find an Overclocking button which offers the user extra performance at the touch of a button. The system automatically overclocks the processor and memory by up to 15%. When in overclocked mode, LEDs also light up on the front of the system to give a really nice glow out of the case. If you don't like this however, but still want to stay in overclocked mode, another touch of the button will turn off the LEDs but keep the clocks higher.

Nightblade is capable of supporting graphics cards up to 290mm in length, and 35mm in width (dual slot). It also comes with a bracket  which supports the extra weight of heavy long graphics cards so they won't be damaged in transit. We've seen this idea implemented in a number of cases but usually this ends up detracting from the aesthetics. With Nightblade, the holder is hidden away at the bottom of the case out of sight.

We really like the direction MSI is heading with this. This compact system offers great potential for users wanting a small form factor PC, but struggle to find individual parts that match together well enough. Nightblade looks great from the outside and offers a lot of options internally, all whilst being smaller than the majority of gaming ITX orientated cases such as the Bitfenix Prodigy. It's great to see a compact barebones system filled with high end parts, and also one that has the option to fit additional high end parts such as a graphics card and Haswell i7. We also hope this is the start of something new and more of these barebones systems will be made, perhaps by other manufacturers, which will add competition to the market.

Thanks to MSI for providing the Nightblade system. You can discuss your thoughts on the OC3D Forums.

SieB
It's a lot better than I thought it was going to be to be honest.
I know that it's not something that can really be done on a case like this but some sort of cable management would be nice.

Squidlorock
Pretty beefy for a lan case or infact any pc, but so many wires&no real way for a window. It's a shame that such a nice looking motherboard is completely out of view. Great first look/review though ttl! (and i certainly wouldn't say no to it, with the current state of my rig

daletur328
Not a bad solution, I do like the idea of the SSD carrier two mSata in raid. I do seem to remember a boost button on my old 486, think it's the last time I saw that item. Will have to wait for a full review to see how it handles the heat.Quote

Conchubair
Really love the idea of a barebones, especially for some of my mates that im trying to get to go PC instead of the new consoles that don't wan the hassle of deciding on a all the parts separately. But why do they all have to subjectively ugly?Quote

DaveLT
Quote:
And they never worked

Cable management is atrocious. I thought the EVGA Hadron was atrocious but this is on another levelQuote
Reply