MSI's article is the start of a one-month crypto experiment. The company will be seeing how much cryptocurrency they can mine using their GE76 Raider laptop in one month, utilising Nicehash as an easy method for mining cryptocurrencies. Later this month, MSI plans to share their results in a follow-up article detailing how much they earned through cryptocurrency mining with their fanbase.

For their experiment, MSI has selected that GE76 Raider gaming laptop, utilising their RTX 3080-powered offering. This laptop model currently costs £4,098.98 at Scan UK, making the system unviable as a profit-motivated mining system.

Nvidia's RTX 3080 Mobile is not a strong mining graphics card, falling far behind its desktop counterpart in terms of Ethereum hash rates using the DaggerHashimoto algorithm. Nvidia's mobile RTX 3080 laptop GPU is roughly as profitable as a desktop-grade RTX 3070, making the graphics card sub-optimal for mining if you want the RTX 3080-powered laptop to pay for itself.

MSI's experiment will likely conclude that mining can be a way for their laptop users to make some money on the side and that their GE76 Raider laptop would take multiple years to pay for itself with today's Ethereum hash rates at the currency's current value. 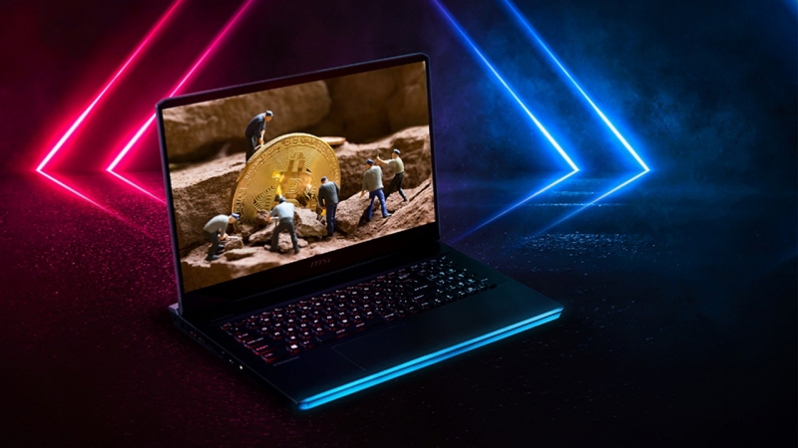 A marketing blunder or a clever strategy?

For many PC gamers, the terms "cryptocurrency" and "mining" are toxic, making the mention of either a huge turn-off when major graphics card manufacturers mention them.

We already know that cryptocurrency miners already target RTX-powered gaming laptops as potential mining systems, bypassing the shortage of discrete graphics cards within the consumer market. On the one hand, MSI wants to sell its products, but they also don't want the negative PR consequences that vocal PC gamers will direct at them for "supporting" cryptocurrency mining.

With the GPU market being undersupplied, many PC gamers feel alienated by the companies that supply the market with gaming products. PC builders feel that they cannot indulge in their hobby wholeheartedly, while others are annoyed that they cannot buy components at reasonable prices. With eBay scalpers and retailers alike pushing prices higher in response to consumer demand, it is hard not to be unhappy with the GPU market's current state.

Nvidia's RTX 3080 Mobile is not a great mining GPU

As mentioned before, Nvidia's RTX 3080 Mobile is not a great mining graphics card, at least when compared to its desktop counterpart. As a mining graphics card, it is too expensive for the hash rates it provides, especially when it is shipped with expensive components. These portable gaming systems contain premium laptops displays, CPUs, SSDs, and memory components, making them a poor choice for profit-motivated cryptocurrency miners.

The RTX 3080 Mobile's mining performance is hampered by the GPU's lack of GDDR6 memory and its smaller memory bus when compared to its desktop counterpart, making it a poor choice for miners. Hopefully, this should make premiums gaming notebooks safe from cryptocurrency miners, but the same cannot be said for more affordable gaming notebooks.

Is MSI's blog post a mistake, or is it a useful taking point?

There is a lot of interest in cryptocurrencies, and there are pros and cons for gaming-focused companies to discuss the trend. On Facebook, Twitter and the OC3D forums, we want to hear what you think of MSI's "one-month mining experiment" and whether or not you think it is a good idea from MSI's marketing team.

You can join the discussion on MSI showcasing the mining performance of its RTX 3080-powered GE76 Raider laptop on the OC3D Forums.

Last time they intentionally boasted how you could run several cheat DLLs for first person shooters on their laptops and not suffer andy performance penalty.Quote

Damien c
Quote:
I thought that was Dell that advertised that?

Either way this is intentional since miners have been buying up not only GPU's but also Laptop's with the new 3000 series card's in them.

This is just a way for them to boost the sales of there laptop's and fair play to them, as it might take some of the people away from buying GPU's as a laptop probably has a better resale value than a GPU overall.Quote

Warchild
Ah if it was Dell then I stand corrected.Quote

g0ggles1994
This was 100% intentional, it's becoming apparent -in China especially- that more and more gaming laptops are being bought to be used for mining so this is a huge market for them to advertise to.Quote
Reply