Valve's Steam Deck gaming system is a handheld, and that limits the amount of power that the system can draw, the heat that it can dissipate and the performance it can offer. Simply put, the system is limited.

The Steam Deck ships with a 60Hz screen, with options to limit the screen's output to 30 FPS or 15 FPS if needed. These options can be used to achieve more stable performance in demanding games, or play games at lower refresh rates to extend the device's batter life. However, the move from 60 FPS to 30 FPS is a large one, and is something that many PC gamers will find annoying. Thankfully, Valve has a fix for this.

Valve's latest SteamOS beta now has the option for Steam Deck users to change their system's maximum refresh rate to a value between 40Hz and 60Hz. This allows users to game at refresh rates like 40Hz, 45Hz, 48Hz, 50Hz and more. In terms of frametimes, 40Hz is exactly between 30 FPS (33.3ms) and 60 FPS (16.6ms). This makes 40Hz an ideal middle ground between 30 FPS and 60 FPS gameplay, which is great news for Steam Deck users.

Why these options matter

Valve's Steam Deck is a handheld system, and its performance and battery life is limited. Refresh rate options between 40Hz and 60Hz increases the Steam Deck's versatility by giving gamers the options to play their games at smooth framerates between 30 FPS and 60 FPS. While this option is not as useful as VRR support would be, it gives Steam Deck users better refresh rate options for demanding games, or scenarios where gamers want to extend their system's battery life without gaming 30 FPS or lower. 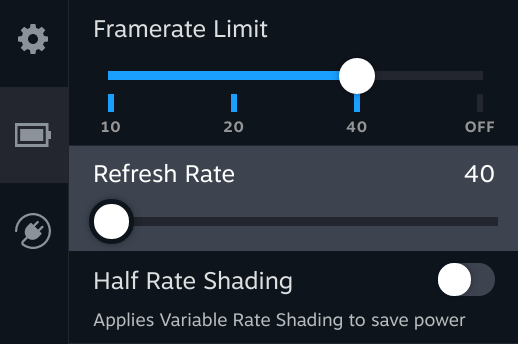 Valve is expected to test this new SteamOS beta for a while before rolling it out to all Steam Deck users.

You can join the discussion on Steam Deck's new beta framerate options on the OC3D Forums.

smilertoo
Shouldnt 45hz be the middle between 30 and 60?Quote
Reply