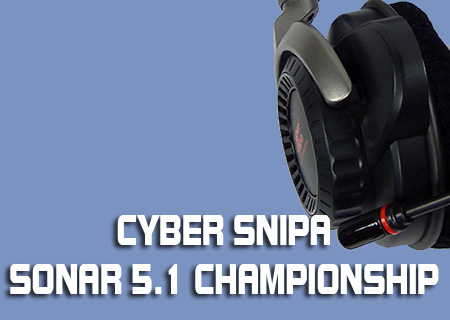 The Cyber Snipa Sonar 5.1 Championships were used as our main headphones for a week so they had the full gamut of tasks to fulfil.

They responded admirably. The Sonar really gives a great sense of space and the surround works very well regardless of if you're playing Shift 2 or watching a film. The bass is certainly booming with the subwoofer working hard to rattle your fillings if you so desire. Everything sounds very clean without becoming muddy at all.

This isn't a particular surprise though. The design of both the headset itself and the inline remote is astonishingly similar to the Ozone Strato we reviewed a year ago. Even the software is identical. So really the Cyber Snipa 5.1 Championship is an OEM rebrand with an identical price to other similarly designed headsets. This is by no means a bad thing and is far more common than most of you guys are aware and if anything helps keep the prices down.

That aside there are a couple of things that stop the Sonar 5.1 Championship from achieving greatness.

Sure the sound quality is excellent. If all you care about is how something sounds then you can have no complaints. Build quality is a different matter. At £41.77 it really isnt badly priced for a proper surround headset. One thing worth mentioning is almost everything is plastic which, whilst it's sturdy enough, isn't exactly built for the rigours of LAN gaming or similar. Even the ear-pieces are lightweight which is great for comfort but, without any heft behind them, they don't quite sit snugly.

All in all it's a headset that's dominated by the sound quality at the expense of almost everything else. The inline remote is positioned so high on the cable (about 3ft from the headphones) that it'll either be in your lap or you'll be resting your wrist on it. With so much plastic everywhere it feels cheap and even if it lasts forever it doesn't inspire the confidence of similar priced units. The software might be comprehensive but very little of the settings are ones you'd ever live with on a day to day basis.

So the surround is excellent, comfort is great and it's got more bass than a fishing competition. At just over 40 quid (£41.77) its priced fairly competitively as well, the audio reproduction is very good though and worthy of our bronze award.

Thanks to Cyber Snipa for providing the Sonar 5.1 Championship for review. Discuss in our forums.