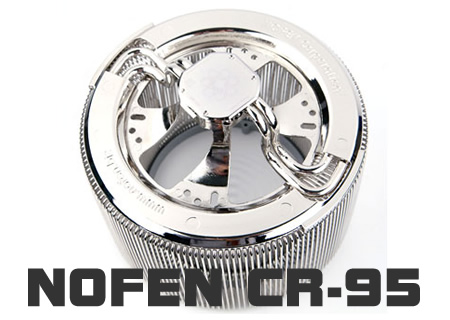 Pretty apt name when you think about it "Nofan" produce passive and 100% silent CPU coolers, you are probably already think if its passive it has to be really hot though right? Well that's what we thought to be honest, but you really need to read on because this review might surprise you a bit!

We couldn't use our normal method of testing this cooler as its not supported, so we have decided to use a range of 1155 CPU's at stock settings in the Gigabyte P67-UD7 motherboard all housed in the Corsair 500R. We ran each CPU twice, once with the front and rear case fans on, and a second time completely passive. Systems were allowed to idle for 30minutes before running Prime95 for a further 30 minutes at this point we take our results.

Right so a 100% passive heat sink, we honestly thought this would be a bit of a downer review, but I can confirm nice and early we completely love the CR-95! To do the cooler justice we did have to adjust our usual testing procedure and we broke out all of our 1155 CPU's to do this and give you all a good range of temperature to compare too.

The difference between an active case and passive seemed to be greatest with the i3 at around 20c warmer, but only 10c warmer with the 2600K. So you could run your rig 100% passive and therefore completely silent but we would advise making sure your motherboard can handle it. Heat sinks on the mosfet's would be an absolute necessity should you be needing to run the system at 100% for any length of time. If its just going to be used as a home server with very low CPU usage then then motherboard cooling should not really become an issue. We would also suggest that you use this in a case with some form of mesh or fans at the top of the case so that the heat can naturally convect out the top of the case, the better the roof ventilation the better the cooler will perform.

The cooler is very easy to install, it has a 2 stage mounting system but the greatest bit is you just have to slide your hand inside the massive cooler opening to install the final screws that hold the heat sink to the mount. We do feel it would have been better to have engineered the cooler and the mount slightly higher because you will be restricted to standard height ram, anything where the heat sink comes out from the ram PCB by more than about 2mm will heat the cooler and stop you from fitting it properly.

Things to point out really are that with it being fanless that means that its 100% silent and wont get clogged up with dust over time and for this reason the temperatures should not creep up due to there being no dust starting to insulate the heat sink. So although we had to alter our testing to fit within the supported hardware of the CR-95 it has performed well enough to shock us, the heat pouring out of the top of the test rig is a testament to its design to best aid the laws of thermal convection. The only bad bit about the CR-95 we can find is its price, at £100 including the dreaded VAT it does carry a sting in its tail, but we have a feeling if silence is your biggest requirement then the price will not matter. 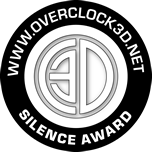 We would like to thank Quiet PC for the sample on test today, you can discuss your thoughts on this review in our forums.

sheroo
It does look fantastic (apart from the price), but I think you hit the nail on the head at the end - where would you use it? Silverstone Fortress FT03? Does it perform well horizontally, for say a HTPC case, or does that compromise its performance?Quote

Luscious
Sounds like a perfect match for the i5-2405S - I just wonder if the height will allow installation in a HTPC case.Quote

dugdiamond
IMHO: they have got it all wrong...

it is not aimed for the overclocker, but for low-to-mid range systems.

it certainly won't be any good in an OC'd rig as it cannot dissipate big temps.

it is too large for a smaller media-server. and, if anyone made a HTPC with one of these - it would be defeating the purpose.

it is fugly... and comes with a hefty price-tag.

a Noctua NH-C14 without fans would be better !!!Quote

tinytomlogan
Quote:
The review had no overclocking in it............Quote

Excalabur50
It's an interesting cooler, not something I would buy myself but for the right purpose you couldn't really go wrong.Quote
Reply