It's been too long since Steelseries have graced the halls of OC3D. Some of their peripherals are still benchmarks by which others can be judged. When it comes to affordable headsets one of our first thoughts is always "but is it better than a Siberia V2?". To which the answer is often no. Today's review steps away from the world of affordable, chuck it in your rucksack, types of headset to the ones that come with every conceivable bell and whistle. Welcome to the Steelseries Siberia 840.

We're PC Gamers here at OC3D, but just because we tend to spend most of our time gaming with PCs doesn't mean we don't have a selection of consoles nesting themselves underneath our televisions, or that we aren't just as happy sat on the sofa as we are in the office. The big downfall of having so many gaming choices is the number of headsets necessary to utilise them all to their fullest. Almost anything works with a PC, but there are few that work with one of the consoles as well and so few that work with absolutely anything you throw at it that we think we might have more legs than there are headsets that work with everything. The Siberia 840 is one such headset.

The primary element is the wireless connectivity. Wired headsets have their advantages but the low latency and 'never flat' side of them is almost outweighed by the collection of spaghetti you accumulate. On the flip side the problem with wireless headsets is that there can be mild latency issues which affect your enjoyment of media or gaming prowess, and many of them struggle with battery life during marathon sessions. There is nothing worse than having the beep of imminent death in your ears and having to fight to find a cable. Plus, once you're charging, they cease to be wireless so you lack all the benefits that a cable free solution can bring.

Steelseries have neatly sidestepped these issues with the Siberia 840 by including two batteries, a base that you can use to charge one at all times, and enough connectivity to allow you to use it on every possible source you have, from Optical to Bluetooth, Console to Smartphone and PC. Let's take a look. 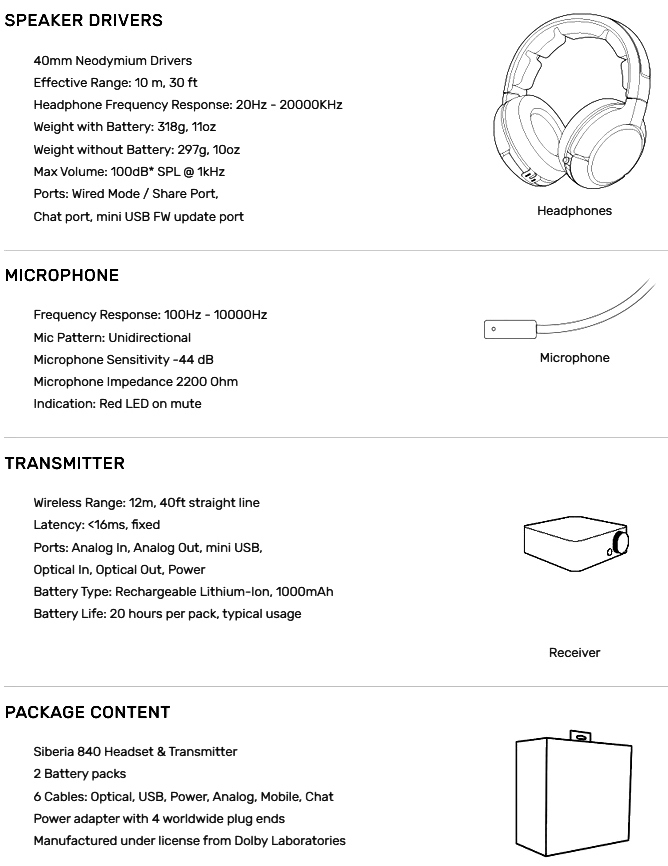 Firedrops
Do you guys have any quantitative tests for audio latency?Quote

the Batteries are excellent Lithium-ion battery... something that every wireless product should use today...
they also give you an extra battery that always being charged for fast swap.

so yes, it is PremiumQuote
Reply