When it comes to first impressions, there is only one thing that we can say about the HAF 700 EVO. This thing is HUGE! Don't get me wrong, being huge is not a bad thing, it's just uncommon within today's PC building landscape. This thing took a lot of effort to carry up several flights of stairs and into the OC3D office. We'd advise getting a friend to help you with this, especially if you have build a PC inside this enclosure. 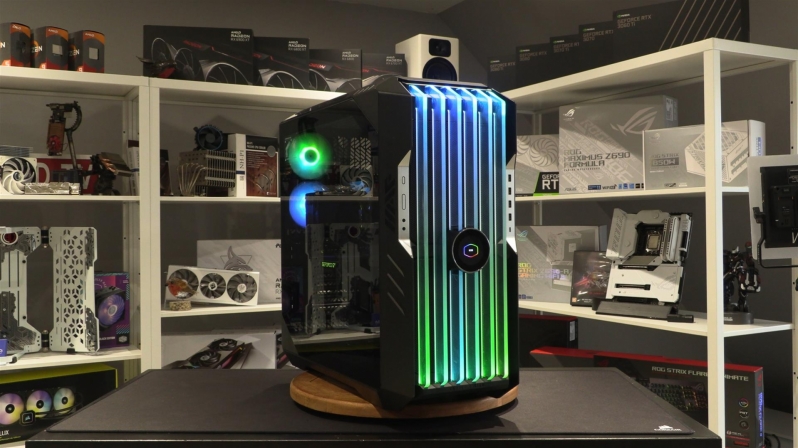 On the front of the HAF 700 EVO is Cooler Master's IRIS LCD assistant, which can be controlled by your PC over USB. We have lightly customised this add-on to say OC3D, though many more customisation options are available. 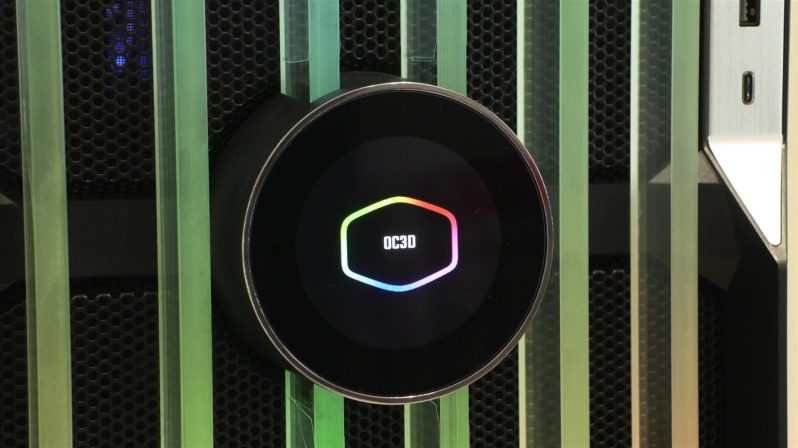 On the HAF 700 EVO's front panel is standard audio in/out jacks, power/reset switches, four USB 3.0 Type-A ports and a single USB 3.2 Gen 2 Type-C port. This is all most PC builder should ever need from their PC's front panel, with Cooler Master offering more USB connectivity than most of their competitors. 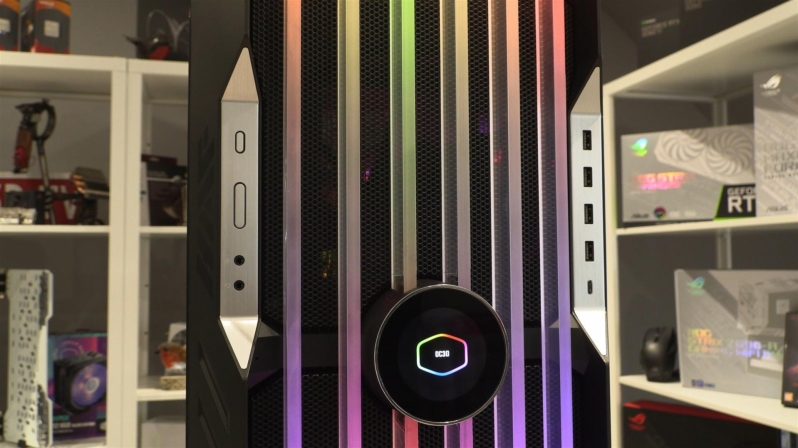 On the side of the HAF 700 EVO is a HUGE tempered glass side panel that covers most of the chassis. This side panel is slightly tinted, darkening the inside of the case to highlight the components inside that you choose to illuminate.

In this image you should also be able to see how small a standard ATX motherboard looks within the HAF 700 EVO. Inside is a Hyper 212 series CPU cooler and a reference GTX 980. Both of these components look small in the HAF 700 EVO. This enclosure cries out for larger components. 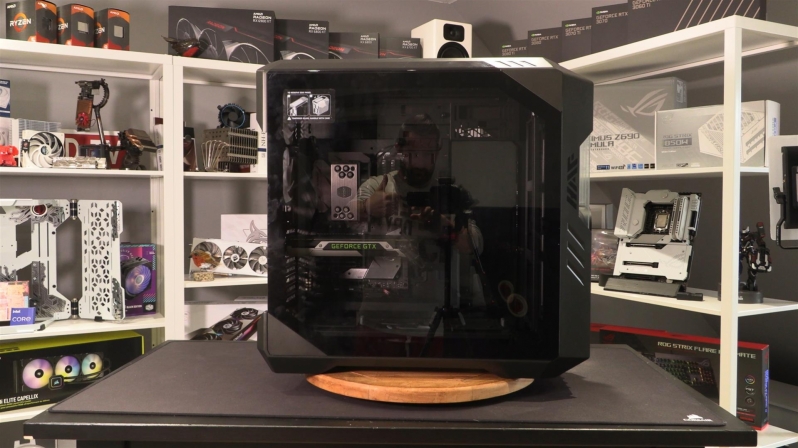 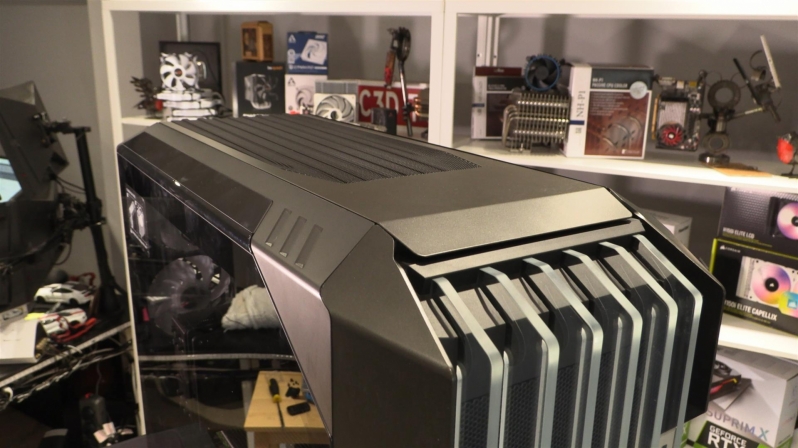 At the rear of the HAF 700 we can see one of the case's best design features. Here, we can see that the case's PSU mount is entirely behind the case's motherboard tray. This removes cable clutter from the motherboard end of the enclosure and opens up the base of the HAF 700 EVO for additional fan mounts, liquid cooling radiators or other add-ons. Extra down-up airflow is good news for users of high-end graphics cards, especially as their size and power consumption continues to grow on their high-end of the market. 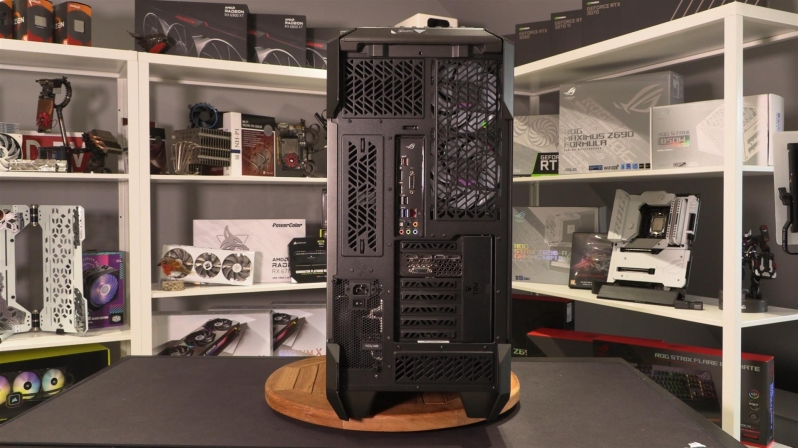 Here, we can see that the HAF 700 EVO includes two 120mm exhaust fans, both of which look small when compared to the rest of the chassis. This space can be used to mount a 240mm liquid cooling radiator if required, but if we were building a PC inside this case, we would prefer to use larger radiators elsewhere and keep these fans are pure exhausts. 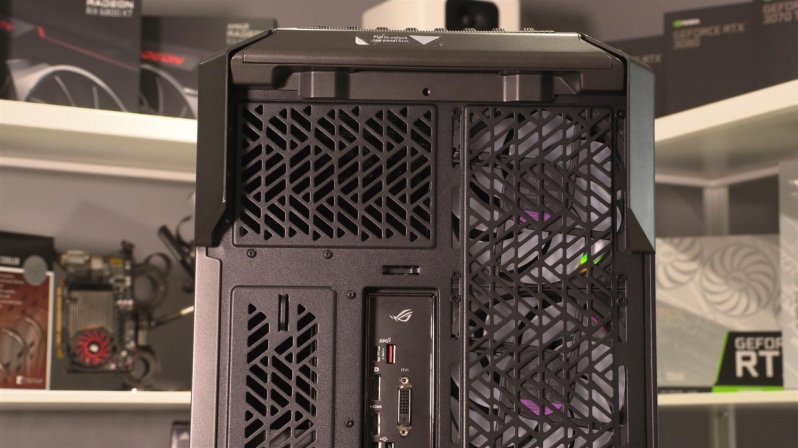 What's unique about the PSU mount of the HAF 700 EVO isn't just its location. It is also tool-free with captive screws (they stay in place when unscrewed), making PSU installation and uninstallation a simple process. The fact that this case only used two PSU screws also reduced install/uninstall time, which is nice to see. Why waste time using two more screws when you don't have to? 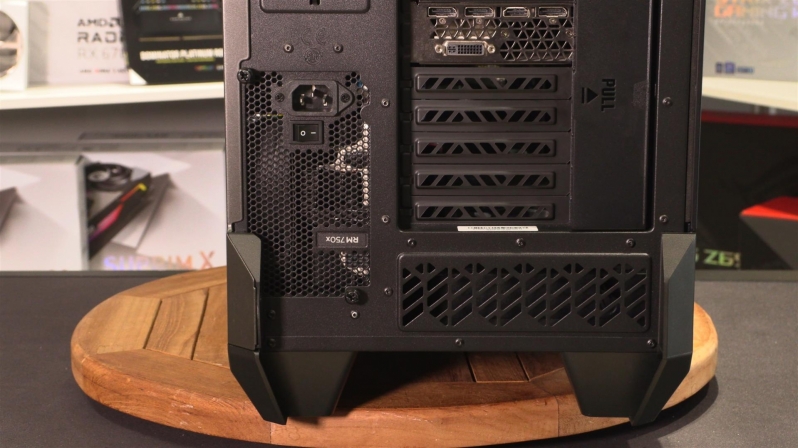 On the right hand side of the HAF 700 EVO is two meshed areas, with the one on the left acting as an exhaust should users add side-panel fans or liquid cooling radiators. The bottom right meshed area acts as a PSU air intake, giving your power supply the airflow it needs to remain cool under heavy loads. 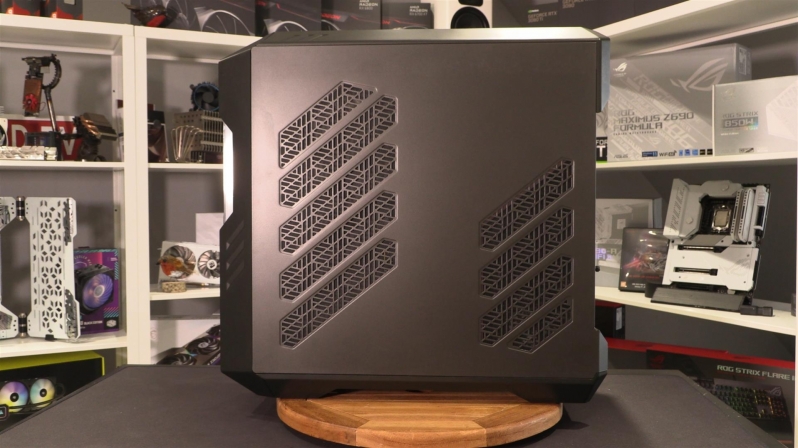 The top panel of Cooler Master's HAF 700 EVO is removable, and that makes it easy for users of this case to install/uninstall fans/liquid cooling radiators and a lot easier to install large motherboards and CPU heatsinks. This is a great feature that makes the HAF 700 EVO a case that is easy to build in, even if you use ultra-large components. 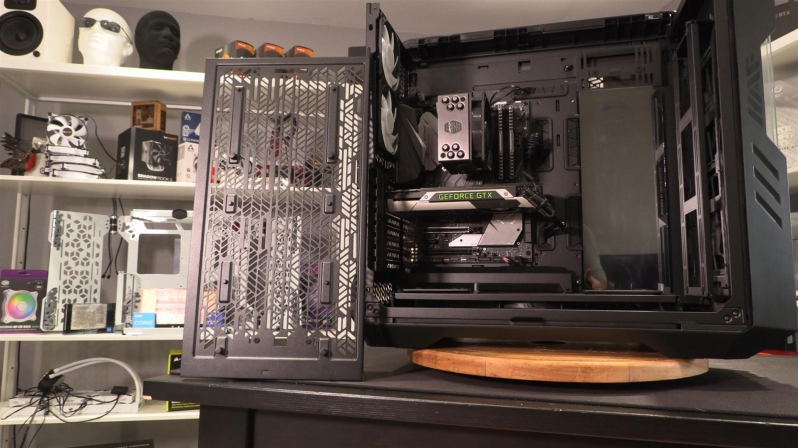 Pre-installed within the HAF 700 EVI is an "infinity mirror" which can be used to reflect various components within your system depending on where (and what angle) it is mounted. In this picture we have not removed its protective film yet, which is why the image below isn't as clear as it could be. 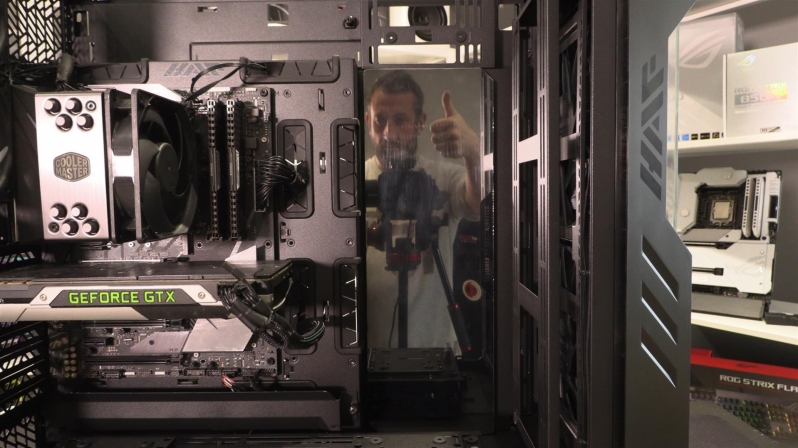 On the rear of the HAF 700 EVO is plenty of space for cable management, HDDs, SSDs and other components that you would like to hide. The HDD/SSD mounts on this side of the HAF 700 are tool-free and easy to remove, allowing users of this case to easily create more space should they need to.

With so much room on this side of the case, it is comically easy to hide cables from view. Once your side panel is on, this mess of cables is covered. No need to spend hours managing cables (unless you like that kind of thing). 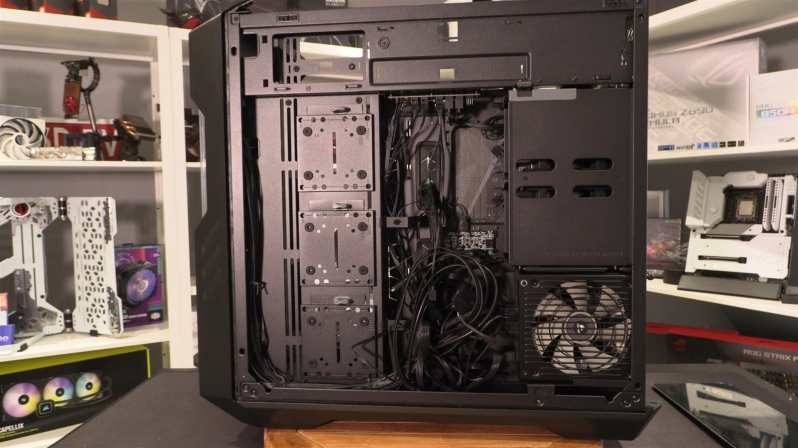 Above you should see Cooler Master's multi-function brackets, which can be used t mount 2.5-inch devices, 3.5-inch devices, liquid cooling pumps and liquid cooling radiators. These mounts are tool-free and can be installed/uninstalled where needed to meet your needs. The HAF 700 ships with six of these brackets being included with retail HAF 700 EVO units. 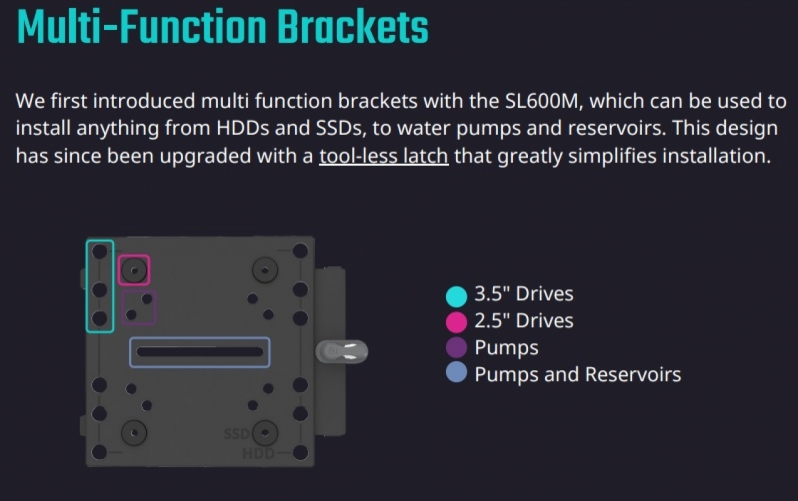 Above the case's PSU mounting location is the HAF 700 EVO's primary HDD/SSD mount, which supports four 2.5/3.5-inch drives. This bracket can be installed/uninstalled in a tool-free manner, making this mount incredibly easy to install/uninstall. if you uninstall this, users of the HAF 700 EVO could use this area to hide other components. Like a liquid cooling pump of reservoir. 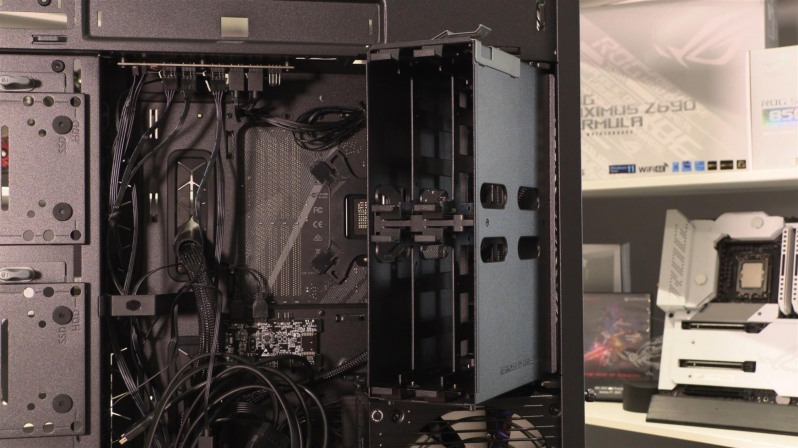 Below you should be able to see that the removable fan/radiator mounts on the HAF 700 EVO are tiltable, allowing users of the chassis to direct airflow or to give their fans/components more visual prominence outside of the chassis. 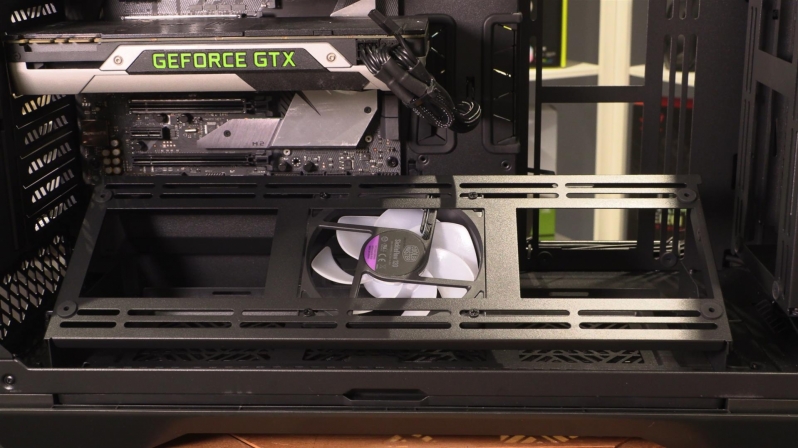 Below we can see that Cooler Master's mirrored glass can be mounted to these tiltable panels to reflect specific areas of your build. This example showcases how this can be used to display your graphics cards' fans. 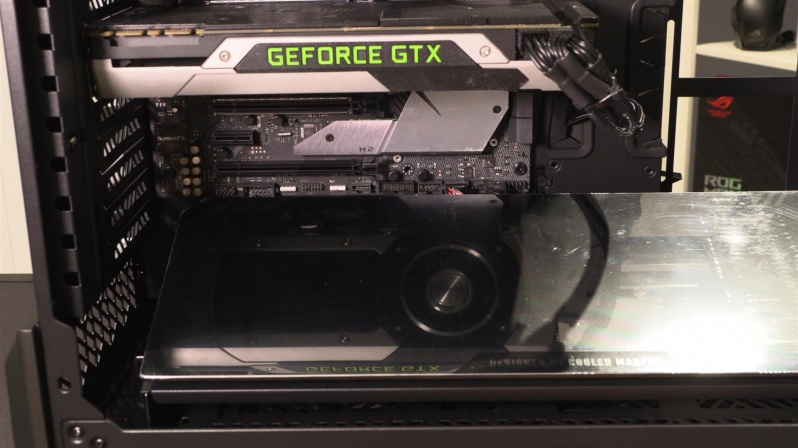 One thing that we would like to point out is Cooler Master's use of angled rubber grommets at the edge of the HAF 700 EVO's motherboard tray. This design allows this case's grommets to be used for the largest of consumer-grade EATX motherboards without harming the HAF 700 EVO's cable management capabilities.

Also, just look how small a standard ATX motherboard looks in this case! It's tiny! 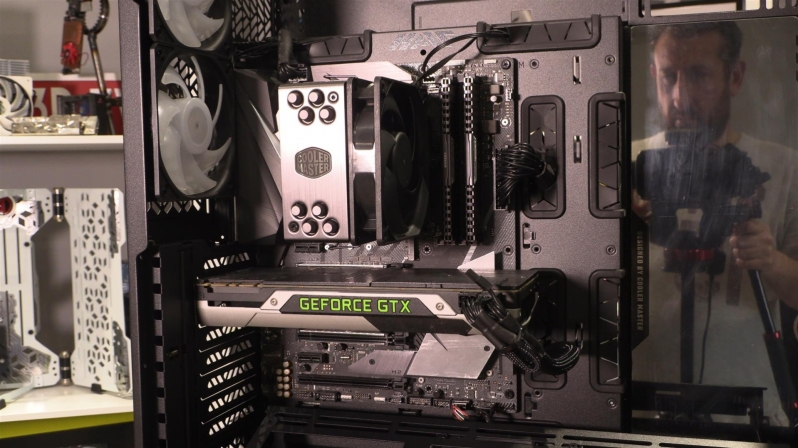 Based on our measurements, the HAF 700 EVO should support top-mounted liquid cooling radiators that are up to 80mm thick with ease. Beyond that, users should be able to install push pull fans or today's thicker 30mm static pressure optimised fans. This case has tonnes of space for liquid cooling enthusiasts! 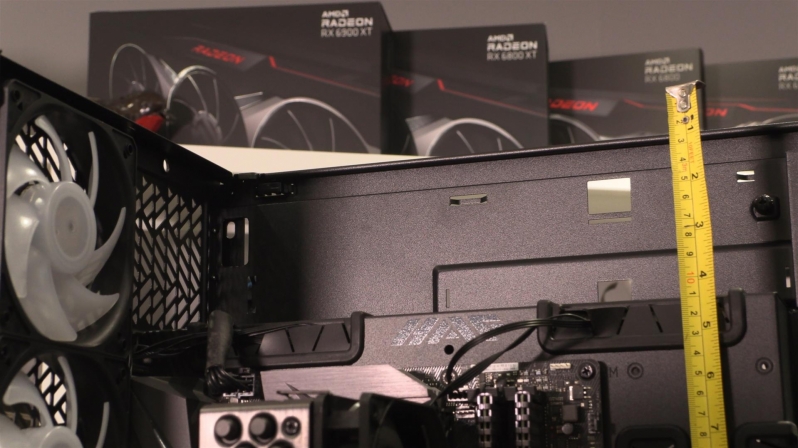