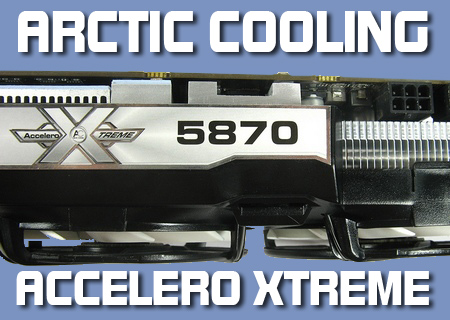 For testing the Accelero Xtreme we fitted the card into our X58 test rig, which is in a standard ACTS 840, and brought out every heat-generators friend, Furmark. With the fans set at our standard 50% we ran the test at both stock speeds and overclocked as well. For our overclocked result we kept our HD5870 at default voltage and overclocked the GPU core from 875MHz to 1000MHz and the Memory from 1300MHz to 1350MHz.

Just in case you are as shocked as we were, here is a shot from FurMark with Extra-Burn enabled. 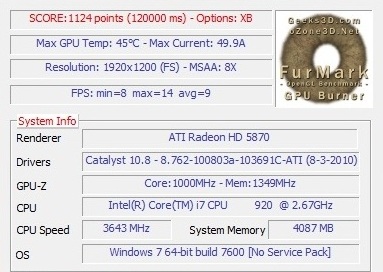 Truly spectacular results. At 50% fan speed there was barely a difference between idle and load, and our big overclock only increased the overall temperature by a single degree. When your overclocked temperature under load is only 5°C higher than the reference cooler when idle, you know you've got a stunning product on your hands.

If the Prolimatech MK-13 was an exercise in frustration to install, miles too large for sensible use, and didn't really cool that well, then the Arctic Cooling Accelero Xtreme is the polar opposite.

Starting with the installation, it's an absolute joy. The instructions are clear and concise without a single element left to user interpretation. You're never in any doubt about what goes where, and what you should use to affix it. The decision to use only 7 screws, but three of a different size to the other four, is also wonderful. Regularly we come across products that have identical screw diameter but some are longer than others. Here the VRM ones are 2.5mm and the main cooler ones are 3mm. So even if you are the "tip it all out and then install" type you still can't go wrong. It's absolutely foolproof.

The impressive part is, if we weren't stopping to set up a photographic documentation of the process it is literally a five minute job.

Cooling performance is epic. Fantastic. Exceptional. 3D Mark Vantage Extreme, with the card overclocked to 1GHz, didn't go over 44°C with the fans at 50%, and even Furmark with the Burn mode enabled only saw 45°C. Stunning performance.

Probably the most impressive part though is the noise. Or rather, the silence. With the fans set to automatic control they rarely go above 20% just because the Accelero Xtreme is so good at keeping the card cool. At these low levels it is absolutely inaudible. Considering our test rig has Noctua fans which aren't exactly loud, it makes the Arctic Cooling effort even more impressive.

Raising the fan speed to 50% made no audible difference, and it was only once we past 68% that we could hear them. Even at 100% full chat they weren't offensive at all and were no louder than our 120mm case fans.

Price-wise is, like everything here, worth applauding too. The Prolimatech was £50 and you had to supply your own fans. This is £45 all in.

So what's the flaws and faults in the Arctic Cooling Accelero Xtreme? Erm. Well. Hmm. The fans are white? Really that's to be expected as it's Manufacturer Branding, but as a third-party option some alternative colours would be nice. Even if it was just available with black fans, although let's be honest that's being incredibly picky.

Altogether the Arctic Cooling Accelero Xtreme isn't the weapon of choice for modified cooling for no reason. It's quieter than we could ever hope, as easy and relaxing to fit as putting on a hat, and cools so brilliantly the ATI chip will give up long before heat limits our overclocking.

Flawless. It is an easy winner of our OC3D Gold Award, and is so comprehensively better than anything else on the market that not only should you purchase it if you are in the market for a GPU cooler, you should buy it even if you aren't. It's that damn good.

Thanks to Arctic Cooling for proving the Accelero Xtreme 5870 for testing. Discuss in our forums.

Finally.. Finally they have sorted out their stick down solution.

It's expensive but by crikey it's worth it. Excellent results as before, but before you had the constant 'crap your pants' feeling that the sinks were going to fall off.

(Ta for the review as ever

silenthill
what if I put this cooler on one of my 480? of coerce it wouldn't fit, but I can be creative

mayhem
Well done artic. Im glad to see there getting top of there game.

that will go onto my wish listQuote

SiN
I love Arctic Cooling's VGA line-up, it is one of the best, aftermarket cooling options on the market!

And, as always, the review is great!

And, silenthill, I believe you are looking for this.Quote
Reply