Performance and a Problem...

To put things simply, the ROG Ryuo 240 and Ryujin 360 left us a little confused after out initial testing, as the results that we were getting out of the coolers were not what we expected.

This confusion caused us to look a little deeper into these coolers than usual, and even contact ASUS for additional clarification regarding specific features of their AI Suite software, all so that we could give you a full explanation for the strange behaviour of this cooler.

Let's get this out of the way, ASUS' AI Suite software doesn't measure CPU temperatures correctly, and as such it is unable to properly react to high CPU loads, resulting in temperature spikes that are unlikely to occur on other CLCs. As you can see in the screenshot below, the CPU cores/package temps are sitting at around 50-60 degrees, whereas ASUS' AI Suite Software is reading CPU temps of 34 degrees. Something's wrong here...

Explanation time, why are ASUS' CPU temperature readings wrong? After some guesswork and some discussions with ASUS, we found that AI Suite is taking CPU Temperature measurements from a thermal probe on the motherboard, sensor which is not on the CPU itself. All fan profiles are adjusted based on this sensor, which means that CPU thermals do not directly impact the fan speeds of ASUS' Ryuo/Ryujin coolers.

In basic terms, this thermal probe cannot react fast enough to changes in CPU temperatures, as the increased heat output of the processor must be conducted through the CPU socket and towards ASUS' sensor. This factor is why ASUS' AI Suite software reads the wrong temperatures, and why these temperatures are much lower than they should be.

During our testing, this resulted in temperature spikes at the start of our benchmark sessions, as there was a time delay between initial temperature spikes and fan speeds increasing in response to the thermal load. This generated maximum temperature results that are higher than they would be if the AIO's fan curves were based on CPU temp instead of a motherboard-based sensor.  ASUS' thermals moved down to expected levels after a small motherboard/socket warm-up period, offering similar performance to other recent 240mm or 360mm AIO liquid coolers.

This has left us in a position where our standard testing methods do not accurately showcase the performance of these liquid coolers in "normal" use cases, though we believe that ASUS should update their AI Suite software to base their CPU temperatures off actual CPU thermals, as this would solve this problem and bring them in line with their competitors. More details about this is available in our vide review. 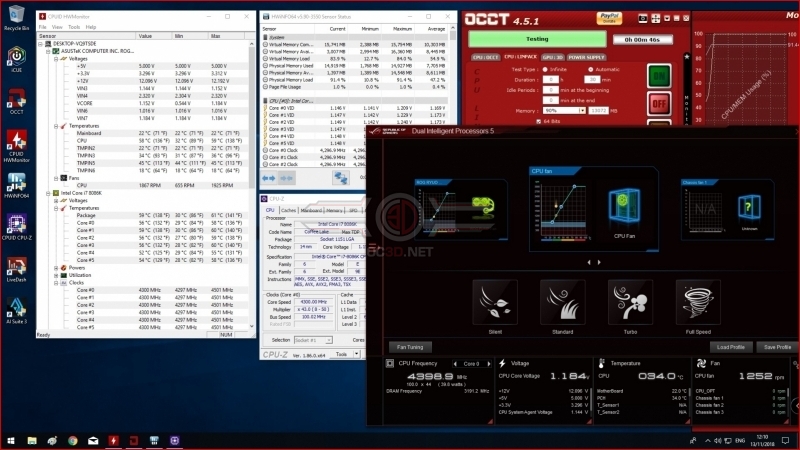 The oddities of ASUS' AI Suite software have left us in a position where we cannot place the results of ASUS' quiet mode, performance mode etc on our heatsink graphs, as they are not reflective of this cooler's potential, or for workloads where sudden thermal spike occur.

In typical workloads, where temperatures gradually increase (such as gaming or general office/workstation use) the Ryuo and Ryujin will act as expected, but in our benchmarking workload where processor load will quickly spike from 0-100%  we find higher than normal maximum temps due to AI suite's lack of reactivity when it comes to fan speeds.