Introduction - Not your typical ITX case

Introduction - Not your typical ITX case

And now for something completely different. Meet the ASUS ROG Z11 ITX gaming chassis, an enclosure which is nothing like any ITX case that has come before it.

When it comes to PC case design, all cases can fit into the same design constraints. Most manufacturers create PC cases with similar layouts, and innovation often comes in the form of new aesthetic options, cable management tweaks and the ability to install a wide range of hardware. When every case needs to fit the same motherboard sizes, PSU form factors and PCI accessories, there is often little room for manufactures to create something unique.

With the Z11, the ROG team has forged a chassis which can fit the company's Mini-ITX and  Mini-DTX motherboards, ATX and SFX power supplies and up to a 240mm liquid cooling radiator.

At a glance, users will see externals of tempered glass and precision machined aluminium, freeing the ROG Z11 from the plastic externals of many modern case designs. The Z11 both looks and feels premium, boasting a net weight of 8.73 kg, which is a lot for an ITX chassis.

ROG's Z11 features a risky design and a high asking price of £240. It's a chassis that demands attention and is designed explicitly for those who want to show off their PC. In this review, we will be looking at this case in-depth, especially with regards to GPU cooling. 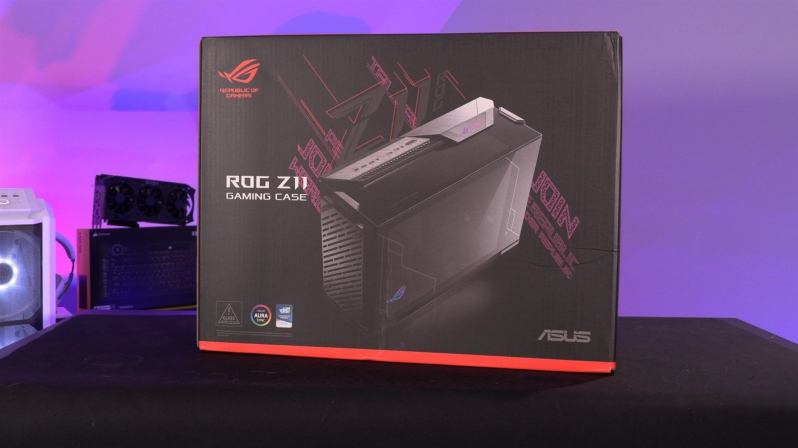 By default, the ROG Z11 features three pre-installed fans and features an integrated fan/RGB controller. In total, the Z11 supports five fans, with the case offering support for two additional 120mm fans within the enclosure. These fans are perfect for a 240mm All-in-One (AIO) liquid cooler.

Within the case, ASUS has stated that the Z11 will support graphics cards that are up to 3-slots thick, though later in this review we will discuss why we do not recommend using thick graphics cards within this enclosure. 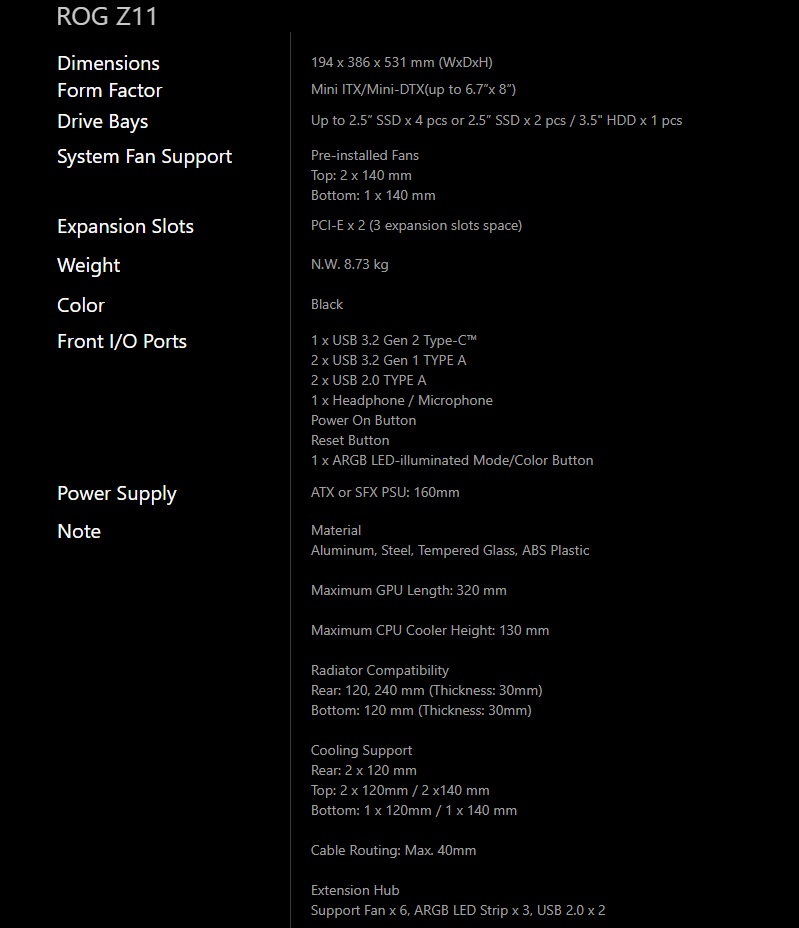 Deadtroopers
That better have been a decent single malt, matey!

Okey smokey: Impressive build quality but at that price I would want NO plastic AT ALL. It is good that you can re-orientate the ROG eye seen thru the side panel; pity about the ROG logo by the graphics card when it is stood up!

Speaking of which: I want to see ALL my graphics card; that obscuring caused by the illuminated logo had my back up straight away. I'd go back to the drawing board and put it across the top as seen when vertically oriented; the external I/O I'd put along the bottom in two rows and with two intake vents either side above for balance (The card would appreciate more intake too!).


Personally I'd use the case horizontally, a hangover from the FT02.


This is so close it makes me grind my teeth: the lopsided, card obscuring, card starving, aesthetic I wouldn't pay £24 for; never mind £240. Sort the aesthetic, I'd probably buy two. ASUS,