Up close: The Cooler

Up close:  The Cooler

Even without its fans the be quiet Dark Rock TF is a striking bit of PC architecture.  Designed as a top down, or Top Flow cooler the TF has two banks of fin stacks, with the lower being much smaller than the upper.  While on the subject of fin stacks we should point out that although be quiet state that there are 62 Elements on the upper stack, and 64 on the lower, we only found there to be 31 on the lower when we counted.  So unless be quiet have developed an interesting new way of counting things, or there's something going on here we're not aware of, we'd have to say they've made something of an error, either that or they want us to think there are more cooling fins than there are.  But don't take our word for it, expand the image below right and count them for yourself.  The be quiet logo on the lower stack is also a nice touch, however the odds of actually seeing it when the cooler is mounted in your case are remarkable slim. 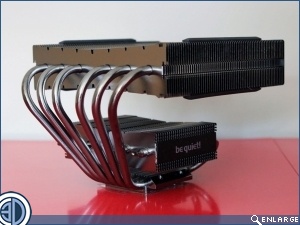 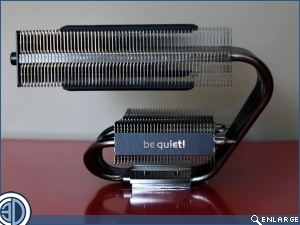 The heat pipes, like the fin stack are finished in a deep dark Nickel that light simply falls into.  Having looked at quite a few be quiet cooler in the past, we have to say they're still one of favourites when it comes to looks, and the TF is no exception.  In total there are six 6mm heat pipes, and although all six pass up and into the upper fin stack, only the inner four penetrate the smaller lower stack. 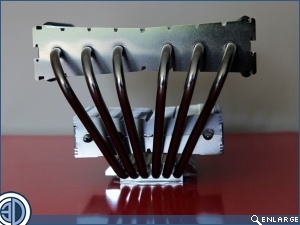 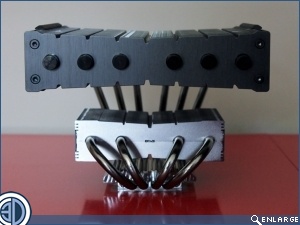 There's also the usual be quiet quality and attention to detail.  Note the thick billet top plate and the gloss black Aluminium end caps.  There are also two rubber strips running down each of the upper and lower edges of the upper fin stack.  These are to reduce vibration and noise from the fans once fitted. 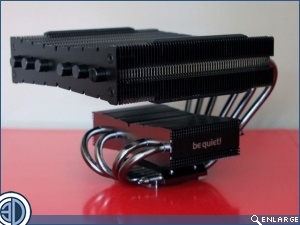 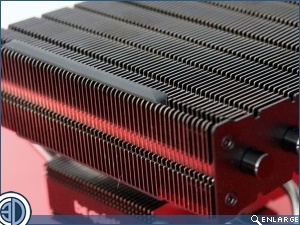 dwatterworth
It's a shame it performs poorly out of the box. Mainly due to the fans? I wonder how the single fan configuration performs, these down-draft coolers are great for height restricted HTPC / SFF builds.

I've got a NH-C14 that matches the NH-D14 nearly step for step on a 3960X workstation at work. Wouldn't the Be Quiet TF cooler look nice with some Noctua NF-A14's or NF-P14's strapped on there? I bet those temps would drop a tad too.

They should have followed Noctuas lead and put in some fin stack pass-throughs to allow easy access to the mounting kit.
https://www.facebook.com/photo.php?f...type=3&theaterQuote

cooperman
Well most of these top down units are not realy for ultamate oc'ing there more for the budget mobo's that dont have mosfet heatsinks such as a lot of the budget FM2/+ mobos that can overclock, but you will still see in the manufactures notes that a top down heat sink is recommended.Quote

dwatterworth
I'd say the price range of these places it out of the budget territory that something like the Zalman CNPS series or CM GeminII cover.Quote
Reply