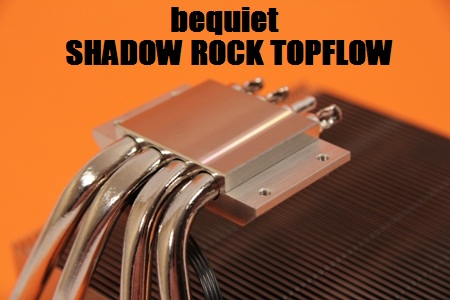 I've fitted a few be quiet coolers in my time and to be honest on the whole I've found them to be a bit of a pain in the behind.  Unfortunately the Shadow rock did nothing to relieve this rectal irritation.

It's almost as if the design engineer has never actually fitted a cooler himself, and as such he has no appreciation that what looks relatively stragiht forward and simple on paper is, in practice, practically a two man job.  I'm resisting the urge to rant here, I really am.  In simple terms it a 2 stage affair like many others, what makes it especially difficult is that the screws that pass through from the back platehave to screw directly into the threads on the brackets that are attached to the underside of the cooler.  So...one hand holding the cooler, the other guiding the screw into the hole, and the other holding the screwdriver to screw it in place....hang on how many hands is that?  It can be done with two hands only but "Mein Got" is it a fiddle and involves a lot of blindly looking for thread holes while simultaneously supporting the not insignificant weight of the cooler.

Come on be quiet  For the love of God pleeeeease redesign your mounting system.

On a more positive note, there are a couple of options open to you with regards to orientation of the cooler.  It is most likely that be quiet envisage this cooler being placed horizontally in an HTPC set up, with the overhang section covering the VRMs and RAM, and as such adding cooling to those areas.  The instructions however do give guidance on preferred orientation inside a tower type case, cautioning against inverted mounting (with the overhang of the cooler orientated towards the PCI sockets).  This is simply because of the way in which heat pipes actually work, and it's felt that they won't perform well in this configuration.  Before I mounted the cooler laterally with the overhang over the RAM I did fit it with the overhang pointed up towards the roof of the case, (as the instructions suggest), but found clearance to the roof of the case to be a bit of an issue.  And when I say "a bit of an issue" what I mean is it didn't fit in some of the cases I tried it in.

Still, lateral mounting seems the way to go so it's the way I went.  I was a little concerned though about RAM clearance so lobbed in a set of Patriots which have quite tall heat sinks attached to them to see if there were to be any clearance issues.  I needn't have worried, loads of room, with the distance from the underside of the heat sink to the surface of the motherboard being 50mm.

The images below show the Cooler mounted laterally so as to give good cooling to the RAM, VRMs and Motherboard in general 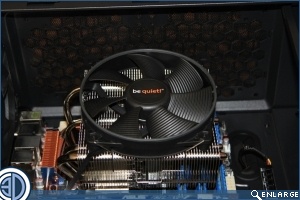 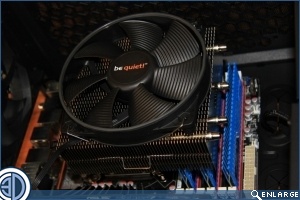