Up Close: Exterior Sides, Rear and Base

Up Close:  Exterior Sides, Rear and Base

Having glanced briefly at the sides of the case in our initial overview we can now look in more detail.  The mesh area that we saw that is recessed into the upper and front edges is vey fine indeed, but owing to the large total surface area (as a product of its length more than its width) it should serve to give reasonable ventilation, which is just as well as it's through this mesh that the PSU draws its breath.  The left hand side of the case is devoid of features, and even the right hand side keeps it clean and simple with a subtle I/O area towards the front lower corner.  A brace of USB 3.0, audio jacks and a separate power and reset buttons are the order of the day. 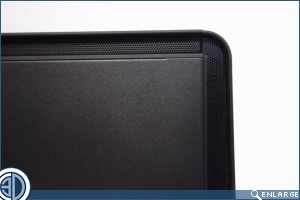 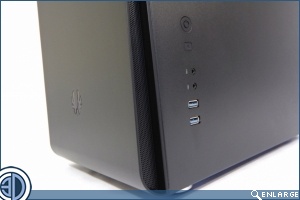 It's when we look round the back of the case that we get the first hint that the internal layout of the Phenom differs somewhat from the traditional.  The keen eyed amongst you will have already worked out that the Motherboard is inverted as the five PCI slots are towards the top of the case.  Another unusual (and as we found when we came to the build, slightly annoying) feature of the PCI slots is the use of a single clamped bracket to hold the five covers in place.  Releasing the thumb bolt and sliding back the clamp releases the grip on all five of the slot covers, which if you only want to remove one often ends in a small cascade and a few choice words. 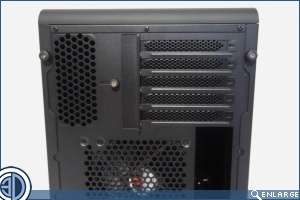 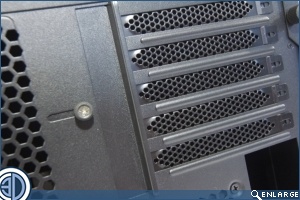 You'd be forgiven for thinking that you're looking at the PSU fan through the rear grill.  Actually we wouldn't forgive you as we'd assume you'd totally forgotten that we're dealing with an inverted motherboard layout so there's no way on Bobs green earth that that could be the PSU.  It is in fact a mounting point for either a 120mm (included) or 140mm (optional) fan.  In the bottom right hand corner lies the socket for a standard IEC mains lead known to you and us as a PSU plug, and to the wife as a kettle plug.  This fitting attaches to a cable that runs through the base of the case and meets up with a fitting at the other end into which your PSU attaches. 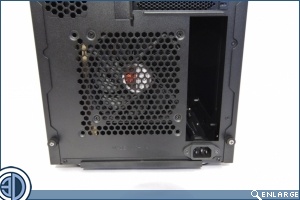 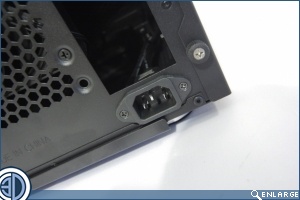 The base of the case is predominantly mesh with a large aperture at the front for the vertically mounted PSU.  Two 120mm fans (one included) can be mounted in the base, alternatively a pair of 3.5" drives can be housed down here.  If you're not using it for ventilation then you may chose to use the magnetically located cover shown below right. 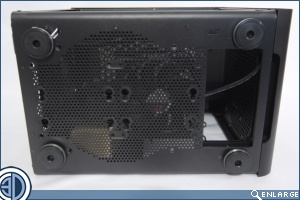 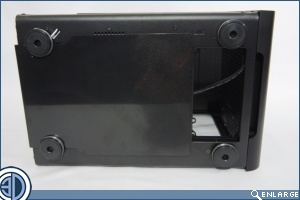