Up Close: Front, Rear and Base 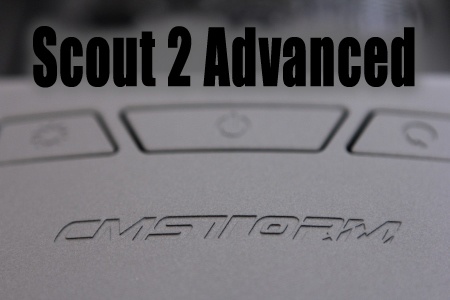 Up Close:  Front, Rear and Base

Although the Scout 2 Advanced has a quite aggressive overall look, the front of the case is actually quite understated.  Both the 3 upper 5.25" bays and the lower air intake area have a fine mesh covering layered over a broader honeycomb style hex mesh, giving the whole thing a bit of a "Crysis" look to it 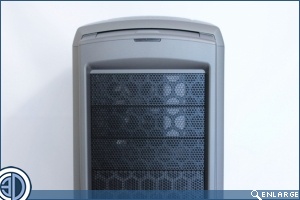 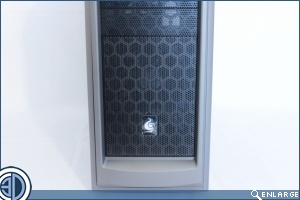 The rear of the case is finished as you would expect in a case of this calibre in the same Gun metal colouring.  Large grommeted water tubing holes sit atop the rear fan extract.  Further down there are 7 un vented PCI covers and to the right of them Cooler Master have included their Storm Guard device.  Weaving the cables of your peripherals though the Storm Guard greatly reduces the chances of them being stolen should you be a LAN event and be lured away from your beloved's side.  And finally at the bottom of the case sits the PSU cut out. 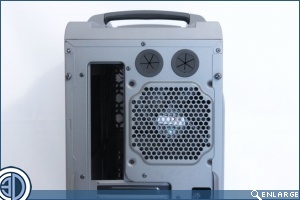 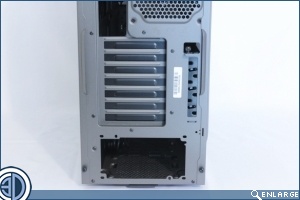 Oft forgotten by other lesser review sites,  the unsexy underside of the case as always gets the OC3D once over.  Four large rubber feet lift the case from the deck allowing air to the PSU and base case fan intakes, both of which have easily removable filters 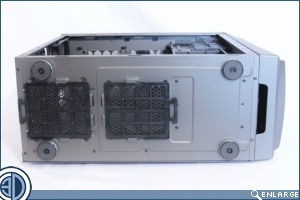 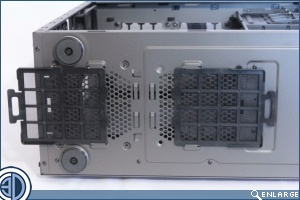 The front of the case pulls of easily, and as the front I/O and power circuitry lives further up the case in it's own area there's no need to worry about attached cables.  Two clear Perspex red LED 120mm fans are included in this position which are wired into the front I/O button allowing the LEDs to be turned off should you wish.  It's the addition of these fans which represents the major difference between the Scout 2 and the Advanced model, as it was often felt that for a case of this calibre the absence of front fans of any sort was a huge oversight on behalf of Cooler Master.  Like the rest of the case the front panel is sturdy and well made.  The mesh filters are held in place by tabs so are a bit of a fag to get out for a real good clean.  Flipping it over as below should let you gel at it with a vacuum though.  The 5.25" bay covers release by pushing back on barbed retaining clips.  They're hard to get out and even harder to get back in. 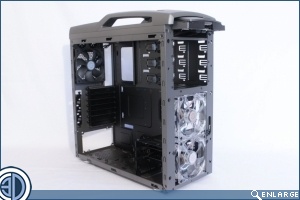 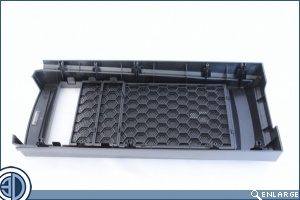