Corsair's Crystal 280X is a case of the dual barrel variety, separating components like hard drives, power supplies and their associated cables out of sight while leaving the user's motherboard, graphics card and other add-on cards in a separate section of the chassis where it is easily visible behind a windowed side panel.

From the outset, we cannot help but be reminded of Corsair's Carbide Air 240, a case with similar proportions and internal layout. The Crystal 280X steals a lot of the Carbide's design features while offering some improvements to the case's interior layout, a cleaner overall aesthetic and three tempered glass side panels.

One design change that we can see from the outset is that Corsair has replaced the twin 80mm fan locations from their Carbide 240 Air with standard vents, likely due to the low availability of high-quality 80mm on the market. 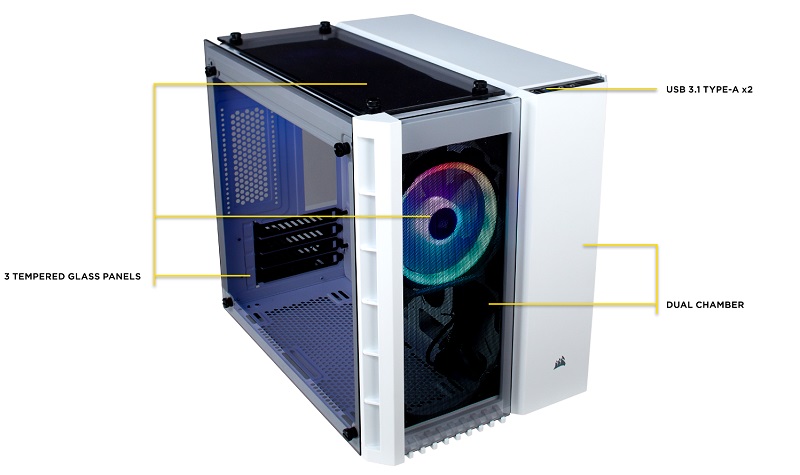 Our first little niggle with this Crystal 280X comes from its strange stock fan layout, placing one fan on the top of the chassis and another at the front of the case, a configuration that looks extremely strange if users purchase the RGB model.

LED fans always look best when they fill the front of a case, especially when used with tempered glass front panels, with a single fan in the top and front making the case feel unfilled, something that can be quickly rectified by moving both fans to the front of the 280X. I think this was one of the first things we did after unboxing our Crystal 280X RGB. 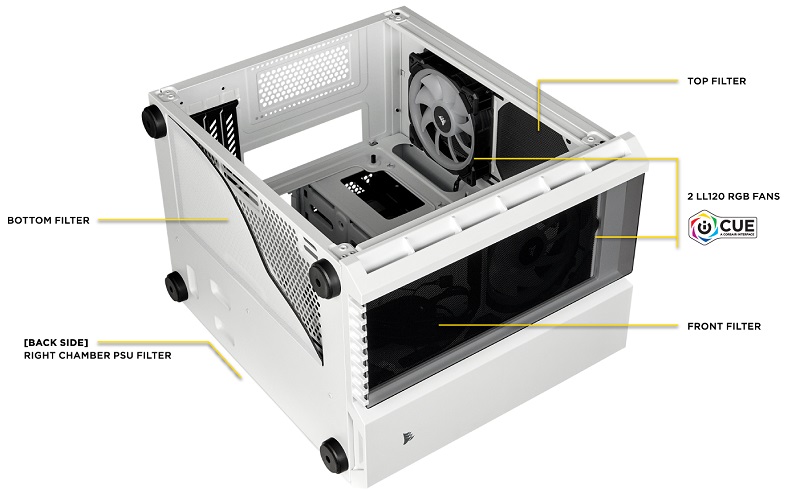 Moving into the 280X, we will start by looking at the case's secondary chamber, the area where the users HDDs, SSDs, power supply and cable clutter will be hidden.

Inside this area, there are two removable drive cages, one which can fit three 2.5-inch drives and one which can contain two 3.5-inch storage drives. These drive cages should be plenty of storage space for most newly built systems.

For airflow, users can draw in air from the outside of the chassis through the 280X's right side panel, which is used to both intake air for the user's power supply and can be used with a 120mm fan to intake air for the section of the enclosure. Thermals are not expected to be a significant factor for this side of the system, as HDDs and SSDs do not produce much heat. 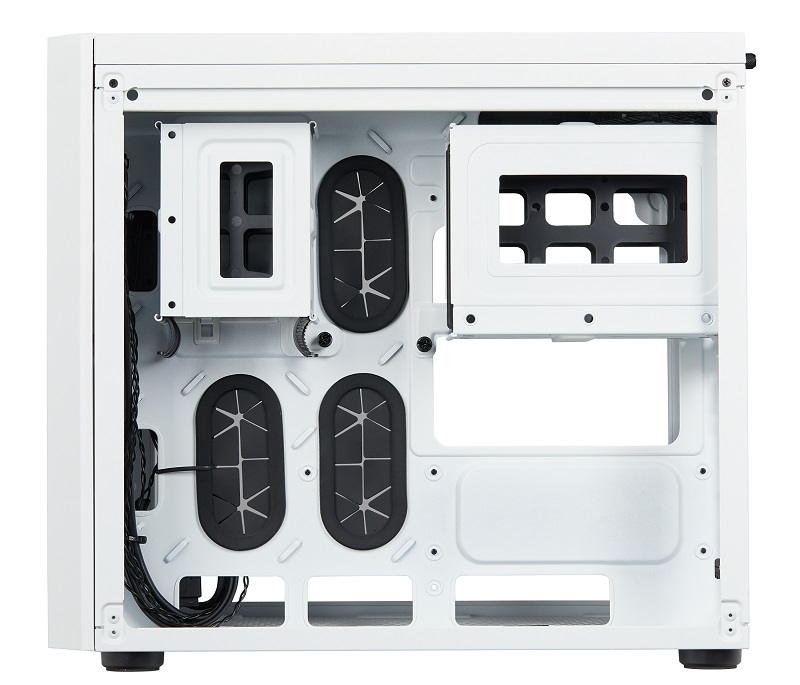 At the front of this HDD side of the 280X RGB, Corsair has pre-installed a Lighting Node PRO. This controller will allow users to control the case's two included RGD fans using Corsair's iCUE software alongside other RGB enabled components. In this image, we can also see how the case's 2.5-inch cage functions.

When a PSU and its associated cables are inside this case, these drives may become difficult to remove. This design feature is what makes the drive cage's removability extra useful, aside from offering users the ability to throw it away if it is unnecessary. 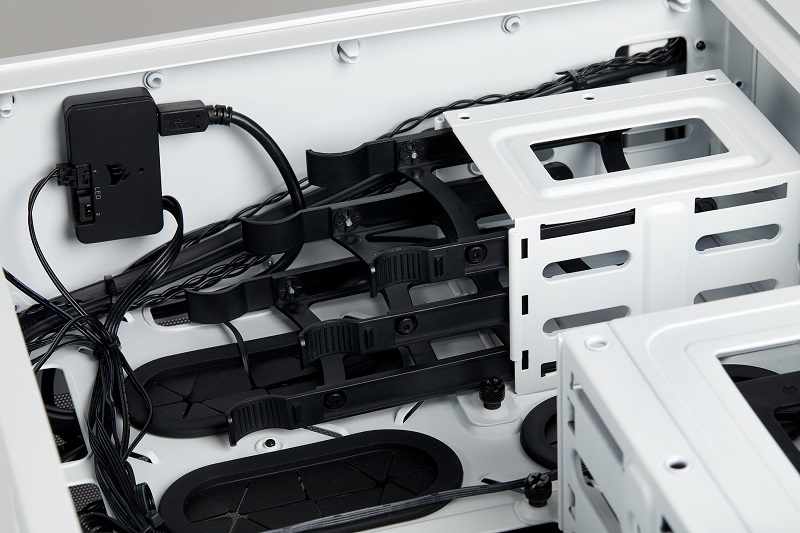 Much like Corsair's older Carbide 240 Air chassis, the Crystal 280X' two 3.5-inch drives are accessible from the rear of the enclosure. Users of the case will still have to remove the 280X's rear side panel to disconnect your HDD's data and power cables, though this feature eliminated the need to remove the case's 2.5-inch drive cage every time you want to install or uninstall and SSD. 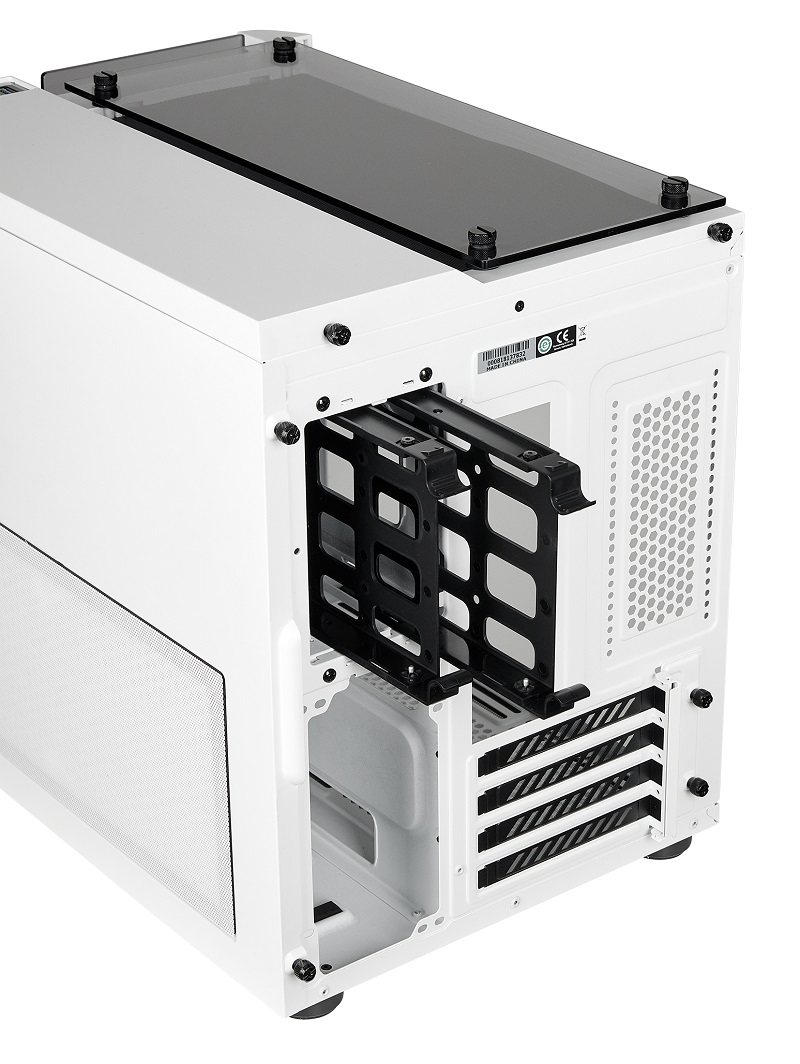 NeverBackDown
One thing you didn't mention that is a big deal in the video was the fact that you can only use the bottom intake areas if you have an ITX board. You may be able to fit fans there depending on the motherboard but you definitely can only fit a fan/radiator with an ITX board. It's not mentioned on there website for some dumb reason but they made it clear that it'll only fit with an ITX board during computex.Quote

tolagarf
This case is just terrible boring! Don't like the design at all, like it's trying to be everything else the competition is currently. It's evident by the closed off front with the glass, blocking pretty much most of the airflow.Quote

NeverBackDown
Quote:
Yep. I wanted to get this case but it's airflow looks abysmal.

I would have liked to see the mesh version... Have a mesh and glass version like every other companyQuote

Warchild
Quote:
Pull out the dremel and start making holes