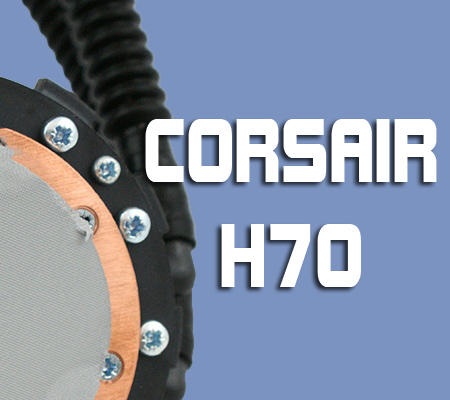 So does bigger mean better?

At the risk of giving a vague answer, sort of. Bear with me.

The H70 has many improvements over its smaller brother the H50. The tubing isn't as rigid and the addition of flexible mounts on the block itself certainly makes the installation of the actual cooler much easier than it was before.

The packaging is greatly improved too. Whilst we appreciate that not everyone is likely to want to re-box the cooler at any point, given the versatility it provides thanks to its brilliant mounting system, you can certainly move it from system to system and so it's not beyond possibility that you'd like to put it somewhere between upgrades. It's also much more likely to protect the cooler prior to arrival than the H50s paper-thin plastic effort.

Cooling capacity and physical size though present a more difficult area to nail down.

Starting with our overclocked i7 results, assuming you're not spending your days using Prime then the H70 can certainly handle even a 4 GHz overclock. When you take into consideration the LGA1366 i7 generates far more heat than a LGA1156 chip, and WAY more than any AMD you care to mention, the results are even more impressive. At stock speeds it's up there with the very best coolers around, keeping everything nice and cool even using the low-speed, and much quieter, fan settings.

This however is exactly the thing that makes it an odd choice. One of the primary benefits of the H50 was the amount of space it left around your CPU socket to help give good airflow across the rest of your components such as the northbridge, MOSFETs and RAM. The H70 though, despite it's much smaller heatsink and pump, is enormous in comparison. The radiator is twice as wide and with two fans you're almost taking up the same room as a tower cooler.

If you run an AMD system and so have much less heat to disperse therefore, the H70 isn't really the one to go for because the H50 will cool equally as well and yet take up less room. Not to mention it is around £30 cheaper.

If you run an Intel i7 system, then up to a point the H70 can handle a heavy usage overclock with aplomb. But again the price bites it somewhat as it's still substantially more expensive than an average air-cooler, and a good twenty notes more than the class-leading Noctua NH-D14, without providing the same level of cooling.

So if you have you heart set on a plug and play water-cooled CPU, or have fierce brand loyalty to Corsair, then the H70 can be recommended. The build quality is great. Installation is a breeze and it will fit anything you want to attach it to. If you just want something that cools your CPU then there are better, cheaper, air alternatives around.

Thanks to Corsair for proving the H70 for todays review. Discuss in our forums.

alienware
Nice one Tom. Thanks for the review !

Looks like it will be another cult-esque success tbh, ideal for people who want water cooling for its cool factor (*groan*) but don't want to get into something that may leak and needs constant attention.

Hopefully one day (cough cough hint hint) Corsair will consider making something similar for GPUs. I would rush out to get something like this that fitted my 5770s.

I do have a criticism with this unit though. The hoses.

With my specific case (the Alienware Predator 2) the unit really needs to be in the front. The hoses simply are not long enough. Corsair know this too as many people have a similar issue to myself. Maybe in the future they can make two models. One for front mounting and one for rear.Quote

Sounds like you were suffering a bit with man-flu tho

The radiator seems massive and it sounded pretty loud when you put the camera near the test station.

For nearly £100 it seems pretty expensive

I have seen the H50 for £50-60 so would guess a lot of people would just buy that instead.

Also the H50/H70 don't seem to have the ability to compete with any proper watercooling setups, if anything they seem to be a replacement for air coolers.Quote

silenthill
Not much an improvement over the H50 and it takes a big chunk out of your case, to be honest the NH-D14 is still king of the game anyway hope you get better Tom and drink lots of liquids it reduces the time the flu virus can stay in your body.

AMDFTW
the h70 beats the h50 lol and even the dh14Quote

tinytomlogan
Quote:
No where near the D14 mate sorry.Quote
Reply