Whenever we're dealing with Corsair products it's easy to take some things as read and assume that things such as build quality go without saying. However, not everyone is as well versed with current manufacturers as we are and so it does bear repeating. Almost without exception any time a Corsair product arrives in the office we can be assured that it will be built to the kind of demanding standards that anyone spending big wedge on a premium item expects. Manufacturers often speak of "military spec" as a positive, except we know that anything for the military or any government backed scheme is always built by the lowest bidder. Corsair stuff is always what people think they mean when they quote the military term. Robust. Rugged.

Dealing with the H170i Elite Capellix first it's another in the long line of hugely successful and popular Corsair AIOs. With three 140mm fans on board it wasn't a massive surprise to see how readily it tamed our CPU temperatures. If you've ever found yourself wishing that you could push your CPU overclock still further, or perhaps run at stock but with quieter fans, then if you've got the platform upon which to install it - and 3x140mm roof radiator cases aren't exactly ten a penny - you'll be delighted with the results. We only wish that, like the recent H150i, it came in white to match the case.

Speaking of the iCUE 7000X Case there is much to initially recommend it. As we said at the start it's built up to Corsairs usual high standards with a robust, unflexible build quality and high quality materials throughout. The white finish matches all the other white Corsair products and will give you a very uniform looking system. For the majority of people "big and white" will be enough, but if it isn't then the airflow and potential to mount your GPU vertically will perhaps be what tips you over the edge.

For £300 though there are a few things which tip us over the edge, but back towards disappointment. The lack of rubber grommets at the top (and indeed the missing cutout in the middle) limit your ability to tidy things up. There are gaps where we would prefer there not to be. The front mounted radiator/side mounted radiator decision has its own compromises either way. We dislike the ability to look in the front and see the drive cage. It's one of those cases that is so nearly perfect and wouldn't have taken much to get there that every slight disappointment quickly snowballs until we're left with the overarching feeling that the 7000X causes us to give a disconsolate shrug. When the might of Corsair and a premium priced case let nearly all the fine details slip it's just irritating. Admittedly it's a problem largely caused by their excellent track record, but we'd rather not have to spunk three hundred notes on a case and then spend a weekend modding it to look sleek.

This is very much a double sided wrap up. The H170i Elite Capellix is a fantastic performing cooler with some spectacular temperatures. It's a shame Corsair haven't bothered producing a white one, especially given the whiteness of the case, but if you purely want a low CPU temperature then it's the business. The iCUE 7000X RGB case is more of a mixed bag. We love the usual high Corsair build quality, and for the majority of people that will be enough. However, given how good Corsair cases usually are and the many areas lacking an attention to detail coupled to the high price tag make it a more difficult recommendation.

The award below is our entry award because the case is OK - it does its job and fits a lot in. Some of you may never understand the aspects we say it lacks but never the less it is indeed a case of two halves. It can accommodate a lot of hardware but in kind of a raw and almost unrefined fashion. Really not what we would expect from Corsair. 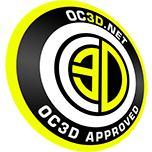 Dawelio
Untill this day it baffles me that basically one of the absolute biggest companies in the industry, Corsair, haven't simplified their RGB solution.

I mean, just 6 cables alone for those 3 fans... Those going to something else that requires both power and data cable, so that's another 2 cables. And this is not even beginning to talk about the potential case fans that might be needed to be hooked up as well.

Peace Đ
Quote:
Isn't one pair of 3 cables the PWM cables which you can also connect to a splitter cable?Quote

Dicehunter
Does absolutely nothing for me, I really wish they would just refresh the Air 540 and put some actual effort into it -

-Replace the plexi with tempered glass
-Make the bottom of the case plain mesh with fan mounts
-Give both side panels captive thumbscrews.
-Make dust filters for all intakes easily removable.
-Update the cases IO with USBC.
-No rubberised surfaces, Just a nice matte black textured plastic.


I know we got the 740 and later the 680X but both were half assed products.Quote

Warchild
Quote:
I still have the 540. Didnt think much of the 740. Seemed quite hideous to me.
Im almost tempted to drop back to the 540 and sell the 1000D just for extra space

Its interesting that the 540 is still sold regularly here, but the 740 appears discontinued.Quote

Dicehunter
Quote:
Yeah the 540 is 1 of the best cases in years for sheer airflow, Still regularly sold at OCUK.

The supposed high end successor, The 680X from 2019, Needed a few areas changing and it would have been a proper successor but of course they had to follow the idiot trend of sticking glass infront of and on top of everything, Blocking airflow.

If they replaced the front and top glass panels with meshed up panels it would have been miles better, I replaced the top and front with plexi panels that are honeycombed from ColdZero, Not only did this drop internal temps by 2-3'c but also made the case quieter as it meant the fans didn't have to spin as fast trying to suck air from behind a solid glass panel.

Also having it so you need to practically dismantle your build to just clean the front dust filter is beyond stupid.

I don't know who the case designer at Corsair is but he needs to be moved to a different department, He's no good.Quote
Reply