Well having said that Scythe don't do subtle, the front of the Ninja4's box does get pretty close.  The madness of microscopic multi language text on the rear does somewhat spoil the effect though. 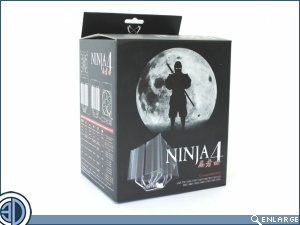 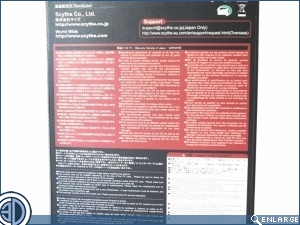 Let's not beat around the bush, for a single tower cooler the the Ninja 4 is a beast, and with a depth of 153mm it will certainly overhang the RAM slot area, largely limiting you to standard height RAM.  God it looks awesome though. 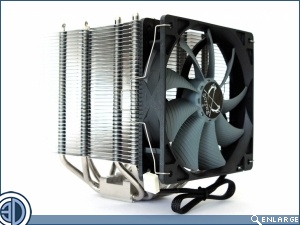 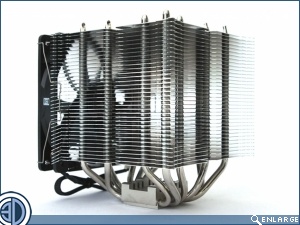 Take a close look at the fin stack and you could almost mistake the Ninja4 for a twin stack that someone has forgotten to split up.  As with the Mugen, the heat pipes pass equally up the stacks which our experience has shown tends to garner good results in the torture tests. 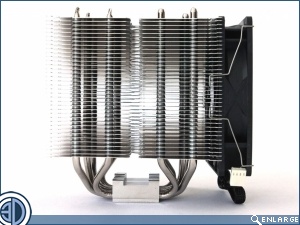 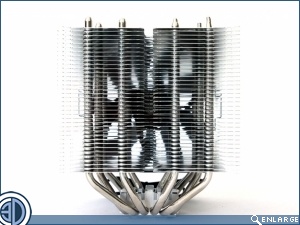 The top of the Ninja 4 is highly polished, but does have the heat pipes protruding through it.  The cooler itself is actually square in the coronal plane which means that 120mm fans can be attached to any surface.  The Ninja4 does only come with one fan, but clips are provided for an additional unit should you want to go push/pull. 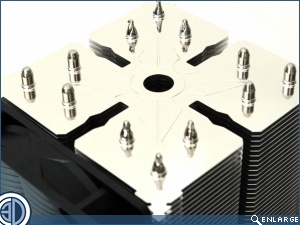 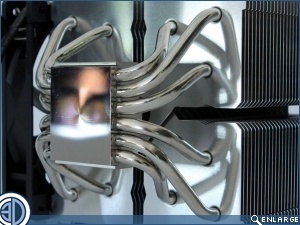 How was it to fit?  Well despite the fact it came with a rather nice long nosed screw driver, which by the way had a proper handle and everything, it was still a total bar-steward.  Possibly on a par with the bequiets, although I have had some therapy recently to remove the bequiet experience from my conscious mind.  It's another one of those screw the backplate on from the front jobs then after fitting the mounting bracket you have to perch the cross bar on the top of the contact plate, lower it into position and then somehow get the screws down the channel too, and then through the cross plate and into the holes on the brackets all without dislodging the teetering cross plate.  Sod to fit though it was, at least it garnered a decent score in the performance charts 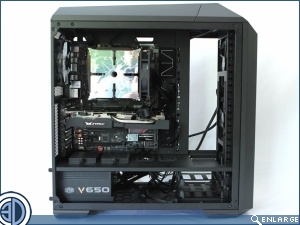 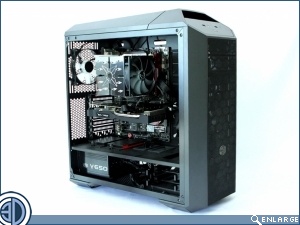 shambles1980
Had a quick look..
dont see any AIO's in there as a comparison.. I think it would have been nice to see atleast 1-2 of the most popular ones in there, it would just round out the comparisons a bit better imo if you also factor noise efficiency and redundancy.Quote

PixxHD
Great article, good to see my D15 is still a beast in the air cooled department.

One small thing, while reading the D15 page I couldn't help but notice something wrong.


Quote:
This is actually not the case, the fan can be positioned forward due to the design of the mounting which allows for big RAM if you have the case clearance for the fan to protrude off the cooler.Quote

Spiderz
That explains all the hype around the Cryorig lot, good prices and performance there. Great to see so many all together in one place for comparison.Quote

Helix
The BeQuiet coolers are meant to be tightened from the back of the motherboard, not above and between the fins. No wonder you found it hard to do.. If you are saying that poor fitting is the reason they don't perform well, then the test results are not representative of the coolers performance.Quote

The_Governour
I bought the Be Quiet Dark Rock TF for the looks for the Lian Li Q10 build - was supriced that it placed so low.

Have the Raijintek Pallas on my living room rig cooling a G3258 and I thought it was great.Quote
Reply