When you are looking for fans right now you are pretty spoiled for choice, with a very wide range of brands, fan types and even specific fan colours being readily available. At OC3D we are often asked what fans you should use when water cooling or on a traditional heatsink. We always recommend static pressure optimized fans, fans which are designed for that kind of workload and from there to choose fans which best suit your PC, be it from Corsair, Noctua, EK or another trusted fan manufacturer.

When EK launched their Vardar series of 120mm fans I could not have been happier. To put things into simple terms they were designed to b exactly what water coolers needed, with PWM control, a high static pressure design and the promise of low noise profiles. With the recent release of white Vardar Fans we decided that these fans definitely deserved a look and that EK's claims needed to be put to the test. 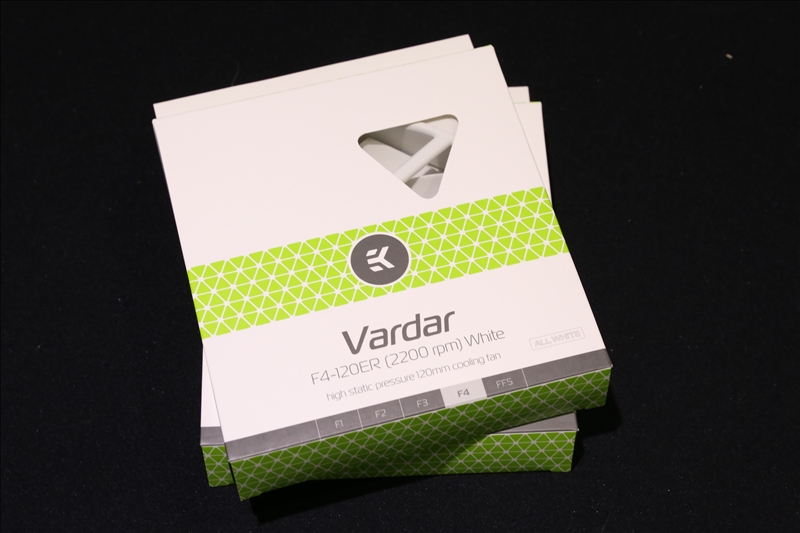 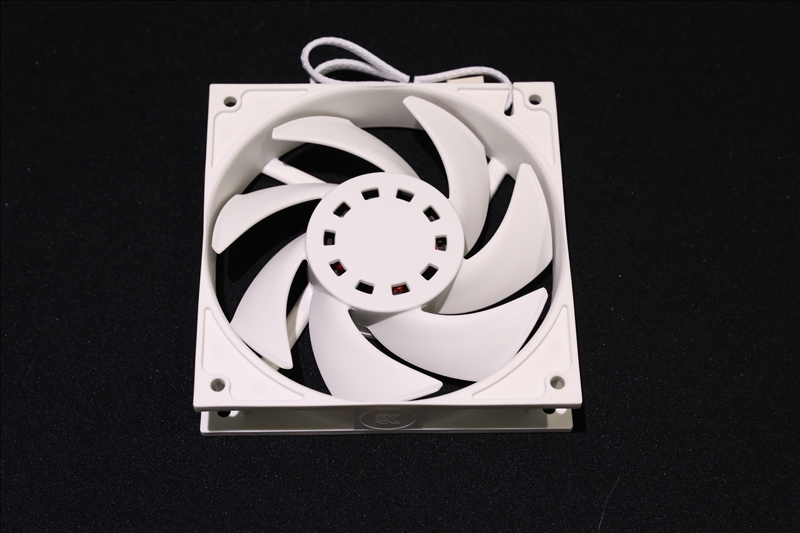 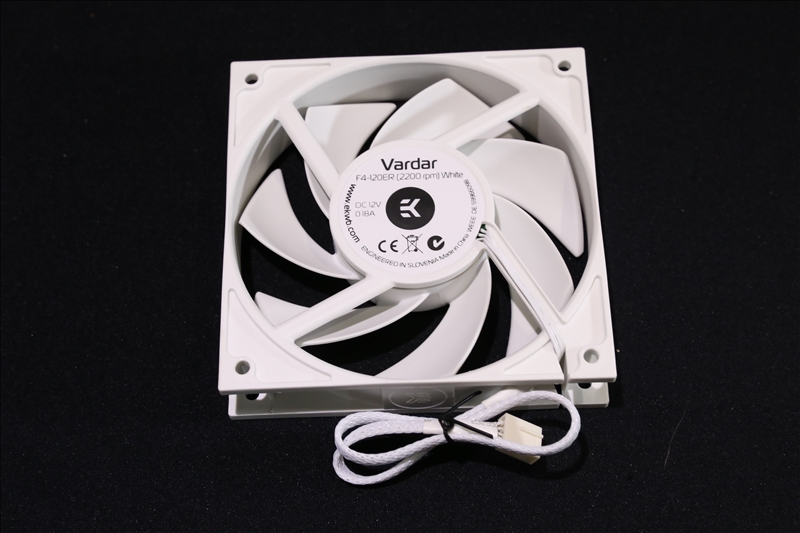 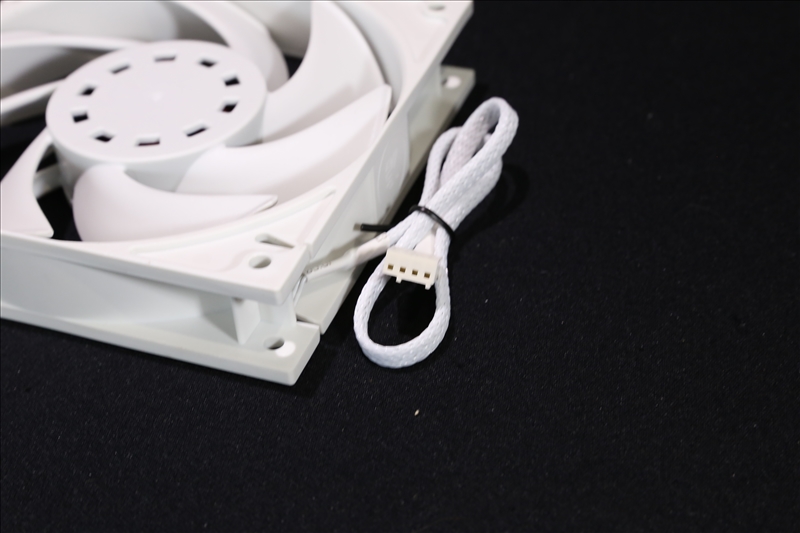 Inside the packaging we see that EK's Vardar Fans offer a very plain design, without flash that we typically see with other pressure optimized designs. These fans are not made to seek you attention, but are nonetheless beautifully designed.

These fans come in both black, white and grey versions, with the fan's power cable being matched to the colour of the fan. This should hopefully allow these cables to be more easily hidden inside your case.

When looking at these fans I cannot help but be reminded of Scythe's Gentle Typhoon fans, which were at the time classed as some of the best fans available, being used by many modders and water coolers even to this day, despite the fact that Gentle Typhoon fans are no longer being produced. 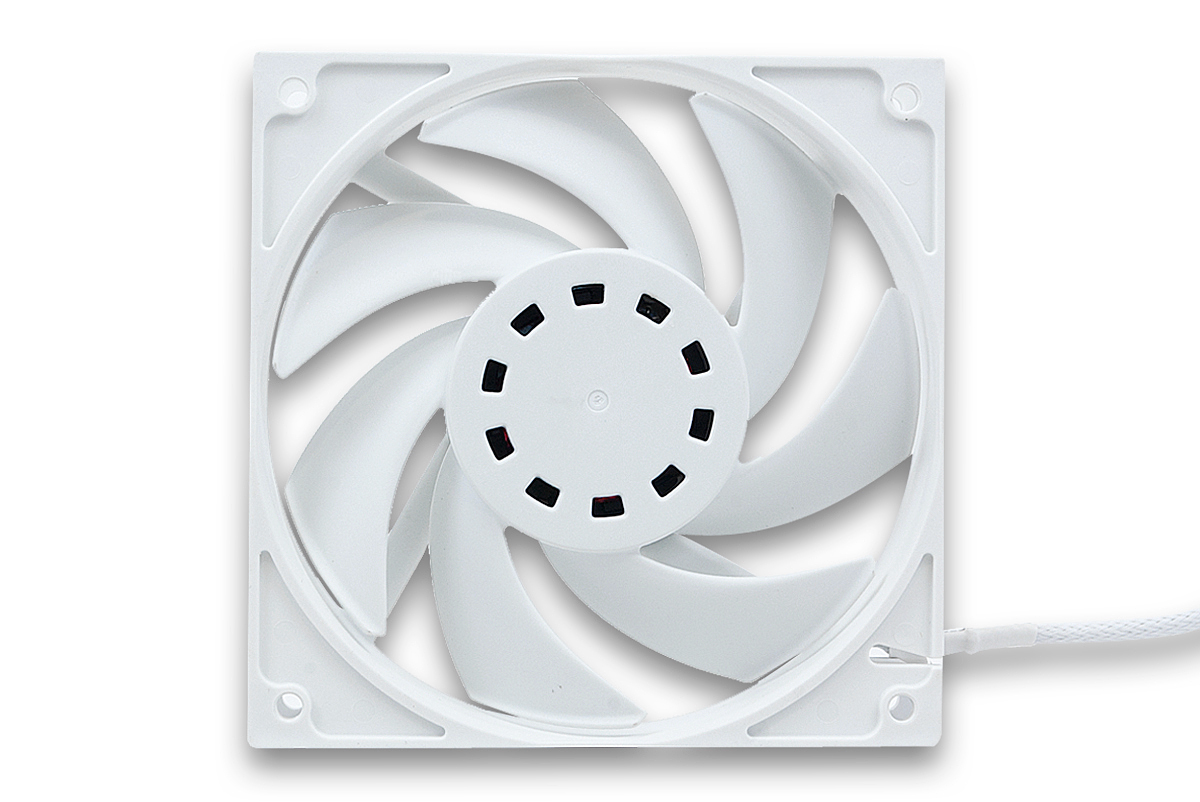 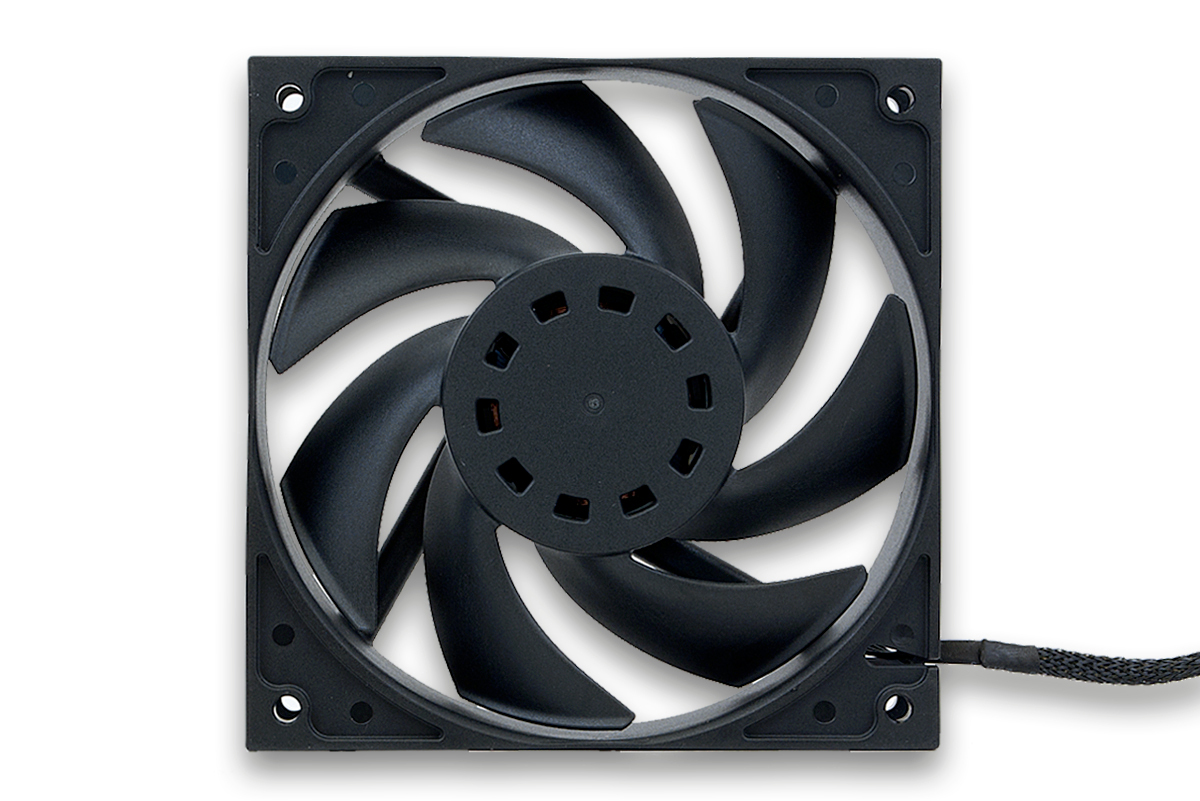 EK's Vardar fans have already been heavily adopted by hardware enthusiasts and PC modders and we can see why. Once we fitted the fans to our Corsair H110i GTX we simply fell in love with the aesthetic. The design is simple but timeless, with many modders having already successfully painted these fans to match their custom rigs, though we quite like the white versions as they are. 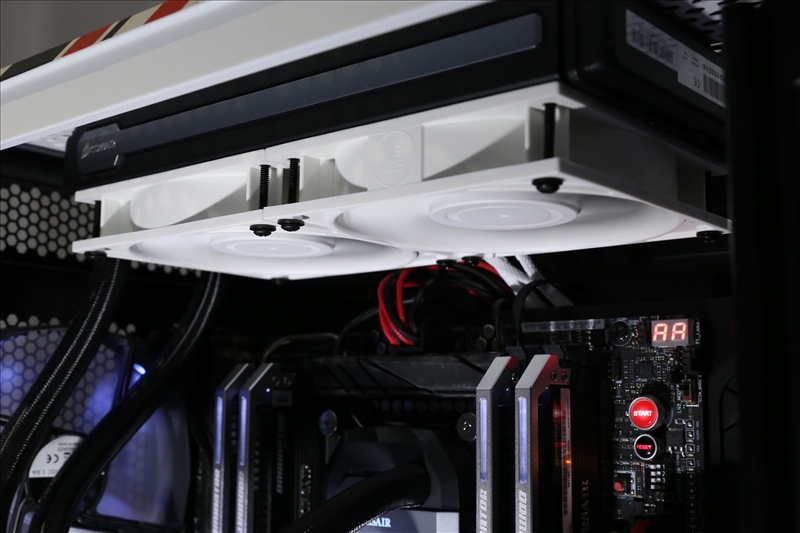 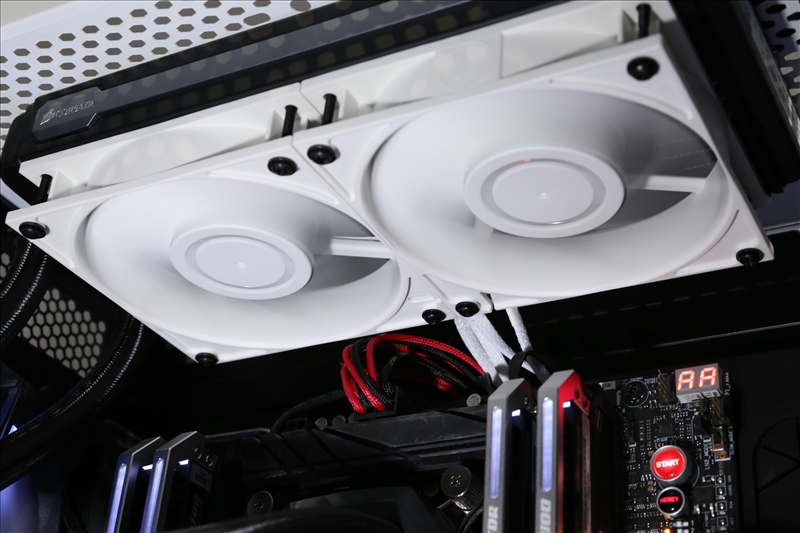 Without testing there is not much point in a fan review, yes we can say that a fan looks aesthetically pleasing, but without the numbers to back it up we cannot possibly give them a recommendation.

We decided to test these fans on Corsair's H100i GTX, which is currently on in our GPU test rig which sports an Intel i7 4960X at 4.4GHz. On this test bed we tested both Corsair's stock fans and EK's Vardar fans to see how they compared.

We tested both sets of fans at speeds of 1300RPM and 2200RPM and used OCCT in order to place our CPU under load. You can see the results of this testing below.

As you can see the EK Vardar fans allow our 4960X to run cooler at both fan speeds, beating the stock H100i GTX fans by 3 degrees delta temp at 1300RPM and by 2 degrees at 2200RPM. This clearly shows that EK's fans perform better at the same speeds, which is great to see. 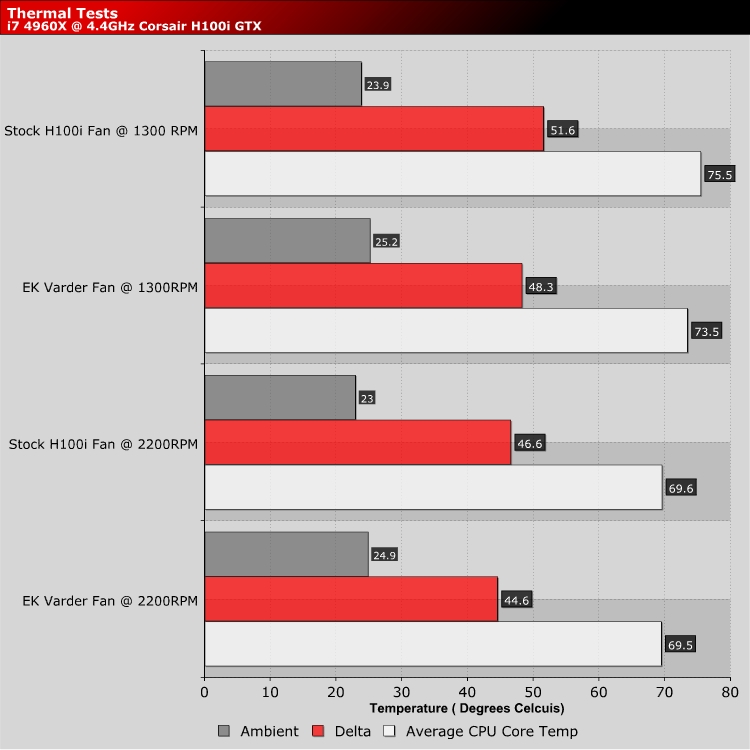 December 2013 was a sad time for PC enthusiasts, when it was announced that Scythe's Gentle Typhoon fans were no longer in production. In the years before and since they were regarded as some of the best water cooling fans available and were simply no longer going to be produced.

Modders and other PC enthusiasts were no doubt saddened by this, but thankfully in the years since they thankfully given a wide range of water cooling, static pressure oriented fans as AIO water coolers began to grow in popularity.

Today we have had a look at EK's most recent Vardar fans and they are simple, effective and come at the very reasonable price of £11.99, or even cheaper if bought in sets of 3.

Many have hailed this fan as the second coming of the Gentle Typhoon, which is a pretty good comparison in my opinion. Both fans look similar, both are great performers on water cooling radiators and both have found tremendous popularity on the PC modding scene.

It is not often that we look at new fans this deeply at OC3D, but EK's Vardar Fans were worth the extra effort. In terms of performance these fans are better than your average fan and in terms of look it has very few peers, being both simple and effective.

EK's Vardar fans have exceeded our expectations and no doubt deserve the popularity that they have gained with modders over the last few month,  for this reason we have given EK's Vardar Fans the OC3D Gold Award.

You can join the discussion on EK's Vardar Series of fans on the OC3D Forums.

Tolemac
I have some F3's coming by royal snail

EDIT: Nice Video Tom you have just answered my statement above I have just got my F3's 1850rpm

Kushiro
Quote:
Was there supposed to be a video or something in the OP?Quote

Tolemac
Quote:
He has to make the thread 1st to link the video

I have some of the all black F4-120ER-2200 coming. That is if Fed ex ever finds my package that was shipped on the 6th from performance pc's. It seems to have vanished into the black hole. Went into Fed ex office in Florida and never left.