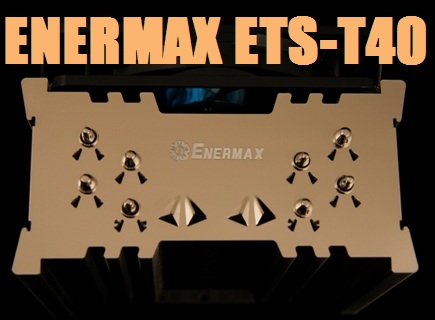 From the very bad pun on the home page you've probably already worked out that the enigmatically named Enermax ETS-T40 sports one of Enermax's  excellent Apollish fans.  Nothing quite like getting a tick in the "Positives" box right at the get go.  The model reviewed here is more accurately referred to as the ETS-T40 TA model and forms part of a range of 3 fans in the ETS-T40 range, each having subtle differences.  In brief the differences are as follows.  The TB model has copper heat-pipes and is fitted with a TB silence PWM fan.  The TA (reviewed here) has Nickel plated copper heat-pipes and has a PWM TB Apollish fan.  The VD model goes back to the copper heat-pipes and comes with the full fat PWM TB Vegas fan.  The ETS-T40 is no monster so we're not expecting a record breaking set of temps from it, but lets see just how well it can hold it's own.

The ETS-T40 is purported by Enermax to include several patented design technologies all aimed at improving airflow and thus cooling characteristics.  As these technologies are best explained by Enermax themselves the following has been taken from the Enermax site

Vortex generators are applied in aviation industry. They make sure that the air stream is lead as close as possible along the airplane’s wings. During the CPU cooler development, the Enermax engineers recognized the potential of this technology to optimize the air stream inside the heat sink: Small spoilers on the fins, the so-called Vortex generators, conduct the air close along the heat pipes. Much more fresh air can be transferred to the back of the heat pipes. 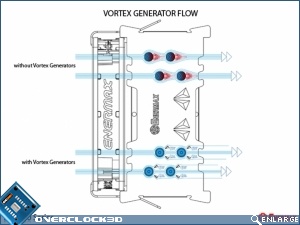 Stack Effect Flow (SEF) - patented
The Stack Effect is a natural, physical phenomenon: Warm air is rising up because of its lower density and leaves a low pressure behind that in turn pulls cool air. Four openings in the middle of the heat sink make use of this effect. They interrupt the air stream so that the warm air gains space to escape. The heat dissipation can be accelerated. 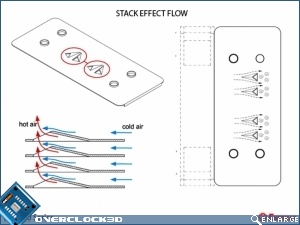 Vacuum Effect Flow
Also the third innovation makes use of a physical effect. The best example to explain this effect is a moving car: It pushes air aside as it goes down the road and leaves a low pressure. Air from the sides will be sucked in to compensate the difference in pressure. According to that, the CPU cooler sides are not fully closed, so that cool air can be sucked into the heat sink. 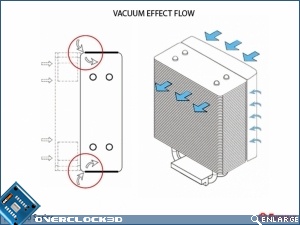 Key features of all three models

I really like the looks of this cooler and it would be interesting to see how it performs on the Sandy Bridge line.Quote

murphy7801
Quote:
Well since sandy bridge run alot cooler it will do well. This seems great cooler for mid to high which is sandys price range and area.Quote

SieB
Seems a decent budget cooler, I'd rather go for the Dark Rock Advanced at that price though.Quote

G-Dubs
Cheers for the feedback on the reviews guys. I've still got my L plates on but learning fast. I was really impressed with this cooler, both in its performance and the quality of the build. Granted the BeQuiet models look sexier but then it's back to the Holy Trinity isn't it. If you're thinking about this cooler then it's also worth looking at the Thermolab Trinity, it offers very similar performance and and if you shop about most likely a smidge cheaper.Quote
Reply