The world of PC cases is about more than simple boxes and adherence to the ATX standards of PSU and motherboard designs. The world of cases is filled with a wondrous variety, with manufacturers offering enclosures of all shapes and sizes. However, well-designed cases always encouraged the creation of clones from competing manufacturers.

If imitation is a form of flattery, then Fractal Design is one of the most flattered case manufacturers in the entire business. When it comes to storage-oriented or silence-optimised cases, most have design similarities to Fractal's Define series. Even now, it's hard to beat Fractal's Define R-series if you want a solid case for a home-built storage server, despite years of attempted catch-up from competitors.

Now, Fractal has released its Define 7, a successor to its already brilliant Define R6. With this generation, Fractal has decided to drop its R-series brand name, instead favouring a simpler numbered naming scheme.

Unlike previous iterations, Fractal's Define 7 will receive an XL variant, allowing Fractal to replace its ageing Define R2 XL. This change has arrived thanks to the increased adoption of EATX motherboards in consumer-grade systems, and to offer users enough room for up to 14 storage drives.

Fractal's Define R6 was already a great case. The question for this review is whether or not the Define 7 will live up to its brand name, and whether or not Fractal's latest features and upgrades are worth it. 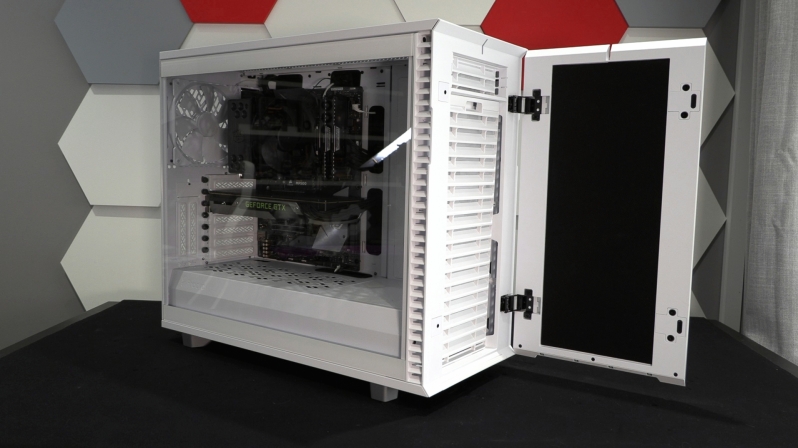 Fractal's Define series has always been about giving PC builders a sleek aesthetic and a solid building experience, and that doesn't change with the Define 7.

Like the Define R6 before it, The Define 7 is designed with water cooling and copious amounts of  HDD storage in mind. This case can support up to 14 total 3.5-inch HDDs, though this will require the purchase of additional HDD brackets. The case also supports 360mm radiators at the front and top of the case, though this will interfere with your HDD mounts. That said, most users of this chassis won't be building with both water cooling and HDD storage space in mind.

The Define 7 offers PC builders the same iconic aesthetic which the company has always excelled in delivering, offering a premium look that's well suited to any gaming room or office environment. 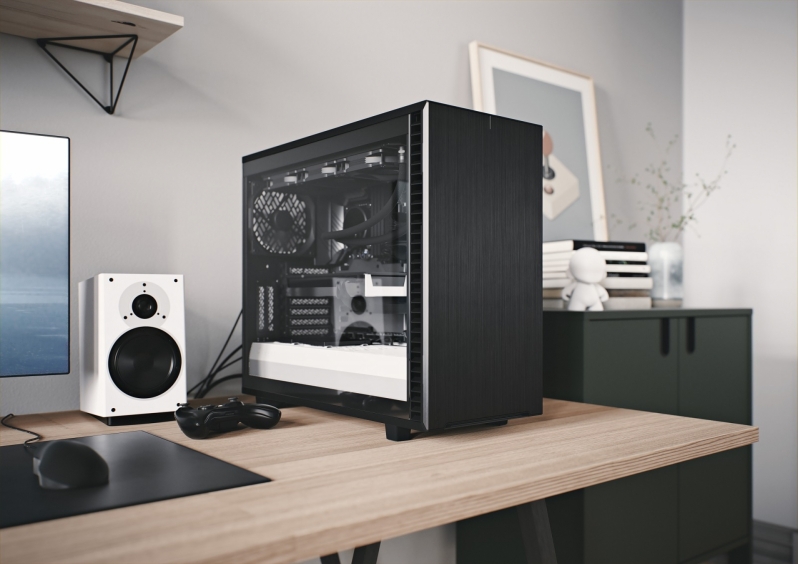 Below are the specifications of Fractal's Define 7, which are compared to the company's existing Define R6. Notice the case's support for a larger selection of fans, more total HDDs and the case's additional room for cable management. 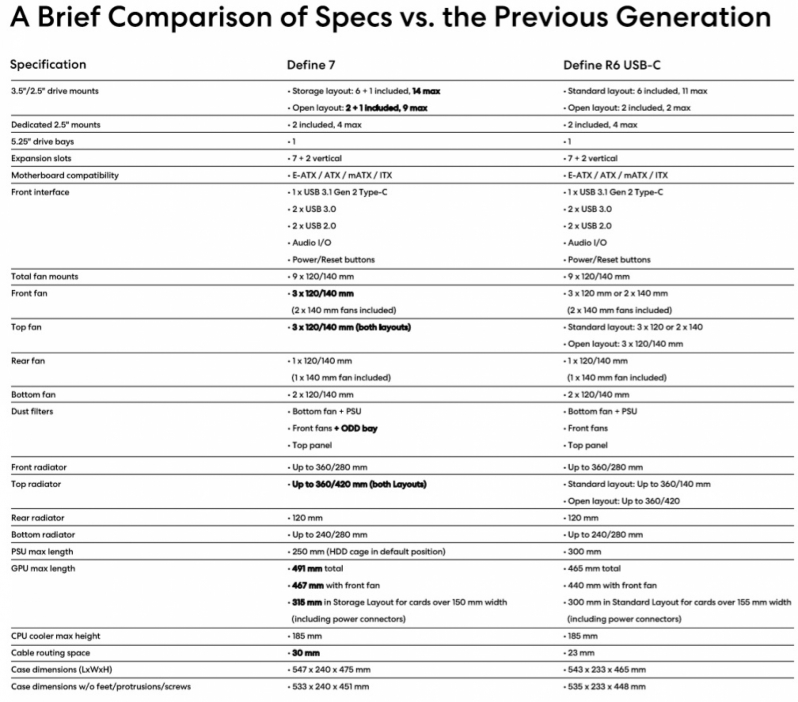 Right, if you liked Fractal's Define series and thought, "I like it, but I want something bigger", then the Define 7 XL is the case for you. This case will fit your EATX or server-grade motherboards, your insane configuration of 18 hard drives, and it will support radiators that are up to 480mm in size.

If you need something big, Fractal's Define 7 XL has you covered, and then some. If this case doesn't have enough space for you, then nothing on the consumer market will. 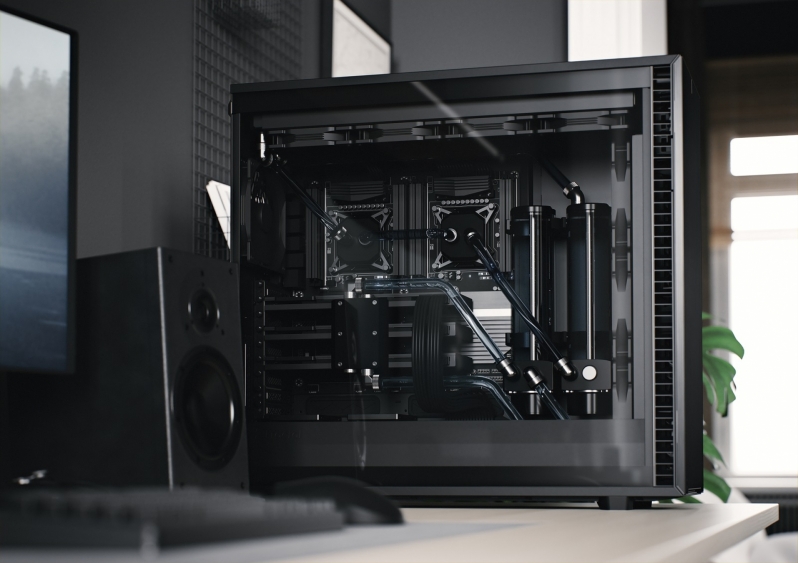 It has been a long time since Fractal release an XL series case, with their Define XL R2 being the company's last entry into this niche market. Now that EATX motherboards are growing in popularity, Fractal has now seen the need to update this series for the new decade. A lot has changed since the release of the Define XL R2, which means that PC builders can expect a lot of quality of life improvements. 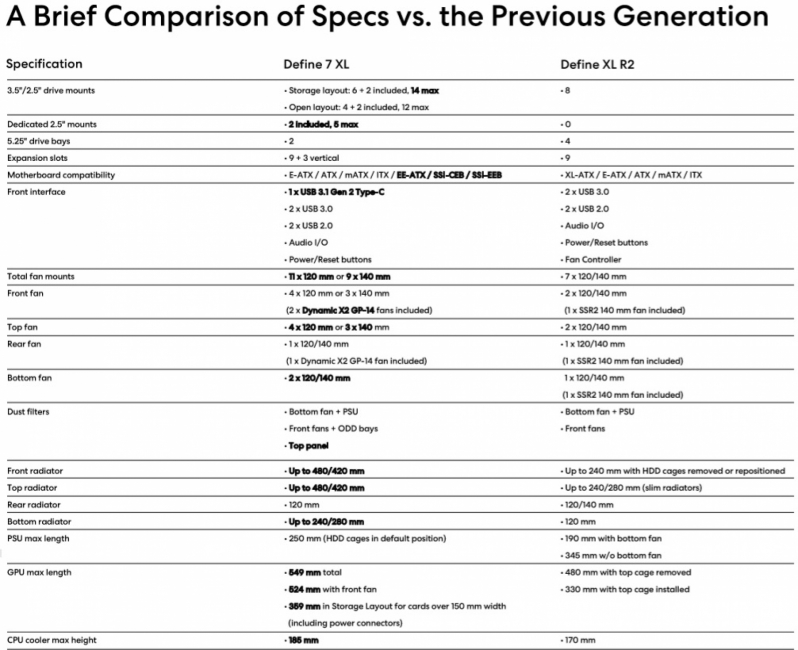 Wraith
So much want! I adored the Define S was considering getting another to replace the Define C which really does suffer bad thermals, Fractal have ticked all my boxes and wetted my appetite again. Loving the OC3D inspired features, Angled full length PSU Cover (Myself), Front Filter (TTL) (we know we inspired them). I know who's getting my hard earned cheddar on this upgrade.Quote

NeverBackDown
If I were to watercool a massive build this would be the case. BUT on the other hand, why are cases getting more and more expensive? I remember you could get an insane quality case for like $80... good ol' times. At least this case for the money is probably the best you can get in that price bracket.Quote

Bartacus
Well I picked up one of these in white, and it's not the best water cooling case out there. It's decent, but it's one compromise after another. You can't stuff this thing with any serious radiator setups. Even having the *slimmest* of rads in the roof with only one set of fans covers up the top of your motherboard, so if you have an LED code display up top, forget about reading that if you have a roof rad. That's with a SLIM rad too, forget about a 60mm rad up top unless you want to cover up half your motherboard and possible interfere with your RAM. So realistically that leaves you with one slim 360 rad up top (forget about a 420, unless you want to cripple the front rad mount). Any thick rads need to go in front, no other choice, and that cripples the top / bottom mounts (bottom rad mounts are utterly useless if you fill the front mount, unless you want to put a single 120/140 rad down there). Like I said, one compromise after another. These things don't become apparent until you start trying to fit rads.

You aren't fitting triple rads in here comfortably, unless you run triple 240s, then what's the point, LOL!

This might be a good airflow / HDD / server case, but for a custom loop, Lian-Li is a far better option IMO.Quote

Avet
Fractal shot themselves in the foot with their choice of not supporting rads in the top. I would understand if it was a smaller case. If it had only 3 cm more space above the board it would be the best case in the world by far. That would be enough to put 360 slim rad at the top, and it would clear end tanks on the rad in front.

3 cm isn't much but as we all know it makes all the difference.Quote
Reply