It's hard to not compare the Meshify 2 with the Define 7. For the most part, they are the same case. Yes, the top and front panels are different, with the Meshift focusing on airflow while the Define 7 focuses on noise dampening and workstation-like aesthetics.

Internally, both cases are almost identical, with the main difference being the Meshify 2's lack of 5.25-inch drive support. These days, most PC builders wouldn't even call this a downside, as the day of the disk has already come to an end most users. In many locations, digital download speeds can be faster than disk read speeds, making disk drives almost useless to modern PC users. 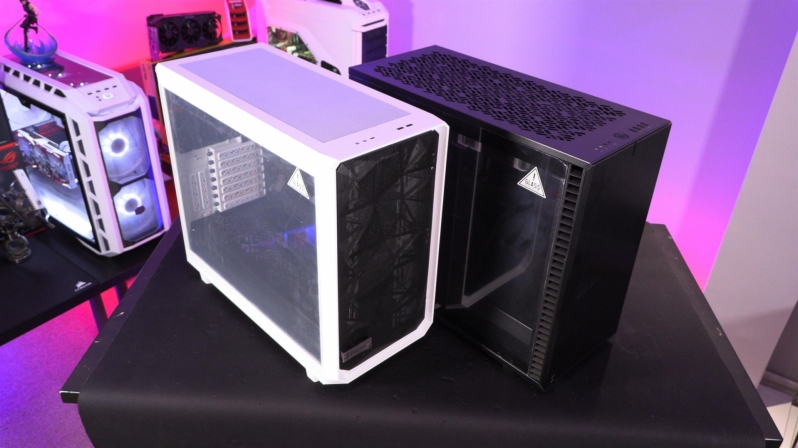 Like Fractal's Define 7, the top panel of the Meshify 2 can be removed to reveal a dust filter. This dust filter can then be removed with ease for cleaning purposes. We can also see here Fractal's new I/O panel, which features a USB 3.1 Gen 2 Type-C port, dual USB 3.0 ports, and audio in/out ports. 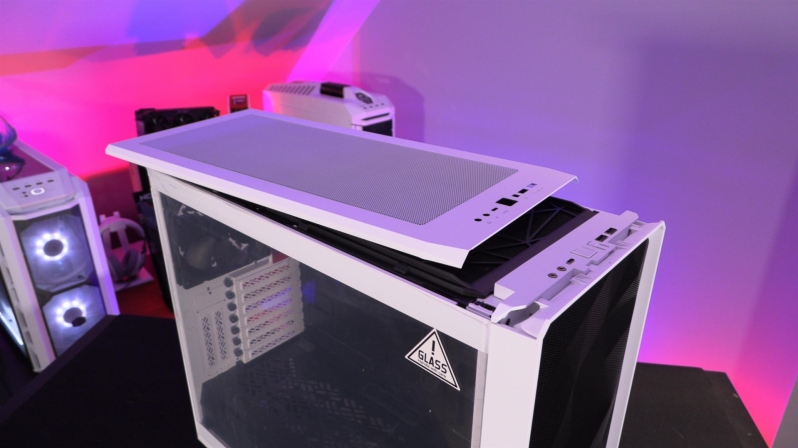 Below the Meshify 2's top filter, we have mounting locations for three 120/140mm fans, with the Meshify 2 supporting up to a 420mm radiator at the top of the chassis. The top panel of this case can also be removed to simplify radiator installation, just like the Define 7. 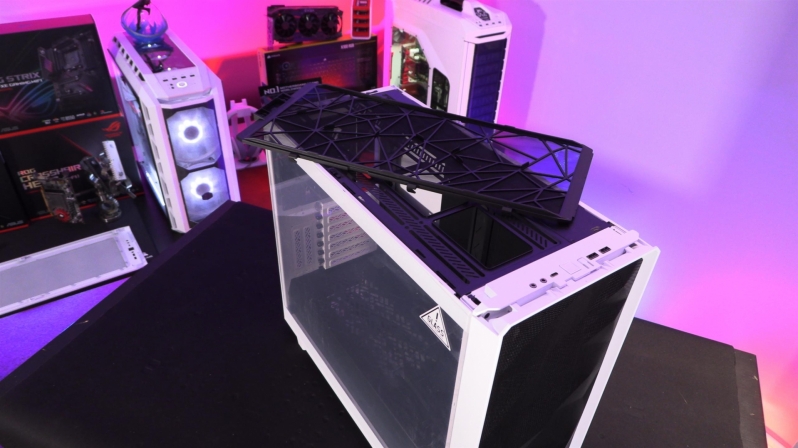 Based on what we can see, the Meshify 2's side panels are interchangeable with panels on our Fractal Define 7. 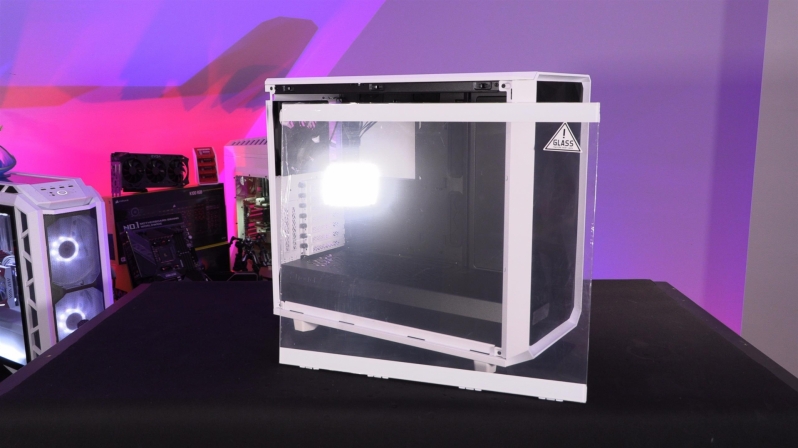 Unlike the Define 7, the Meshify 2 white does not feature all-white internals. Instead, the Meshify 2 features a mixture of black and white components, providing users with an internal contrast which matches the contrast of the case's exterior.

At the base of the case, we can see that the case features the same PSU cover as the Define 7, complete with the same venting holes and removable front sections. 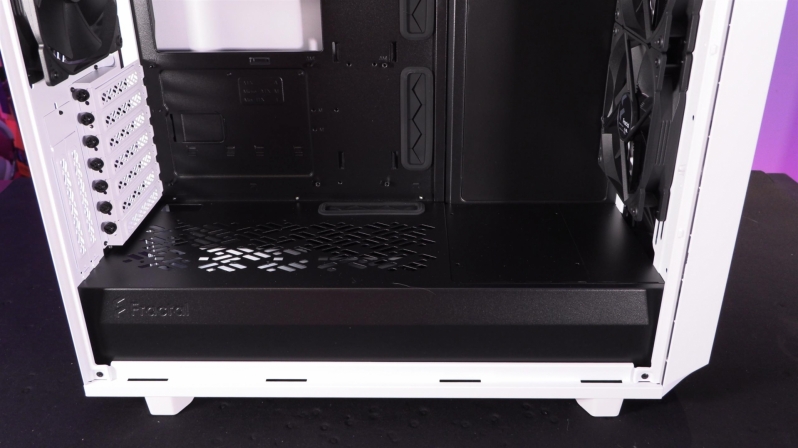 Unlike many of their peers, Fractal has considered all of their users when designing their Meshify 2. Below we can see two removable sections of their case's PSU shroud, with the first being for users of an additional front-mounted fan and front-mounted all-in-one liquid coolers while the second is designed for users of a large number of HDDs and large water cooling radiators with push/pull fan configurations. 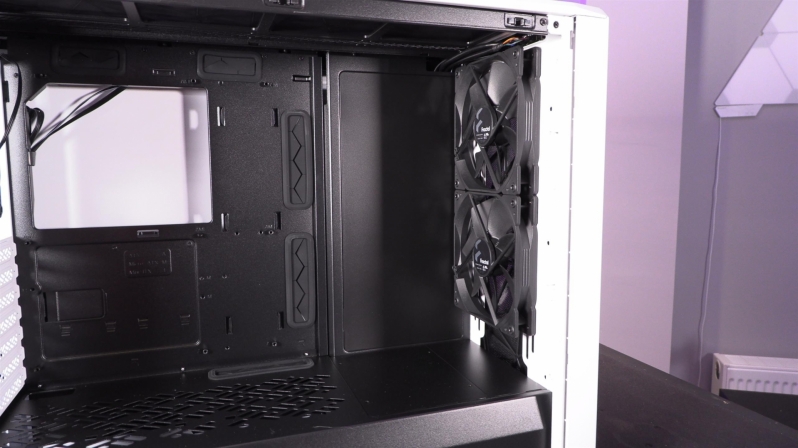 Like the Define 7, the Meshify 2 has a hinged front panel, allowing users to clean the case's dust filters with ease. Need to spay it from behind with compressed air? Easy. Want to make sure your fans are pristine? Simple.

Here was can also see that this chassis features support for up to three 120mm fans or two 140mm fans at the front, supporting water cooling radiator sizes of 360mm or 280mm. The door of this chassis makes fan replacement and radiator mounting a breeze, unlike some competing designs. 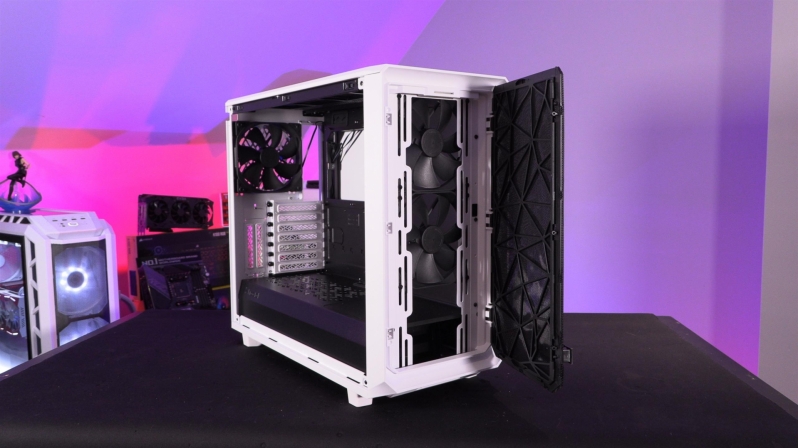 At the base of the Meshify 2, we have a large full-length dust filter, which can be removed from the front of the chassis using the handle which is visible below.

Assuming your PSU is short enough to support this, the Meshify 2 can support up to two 140/120mm fans at the base of the enclosure, providing users with additional airflow through a filtered intake. 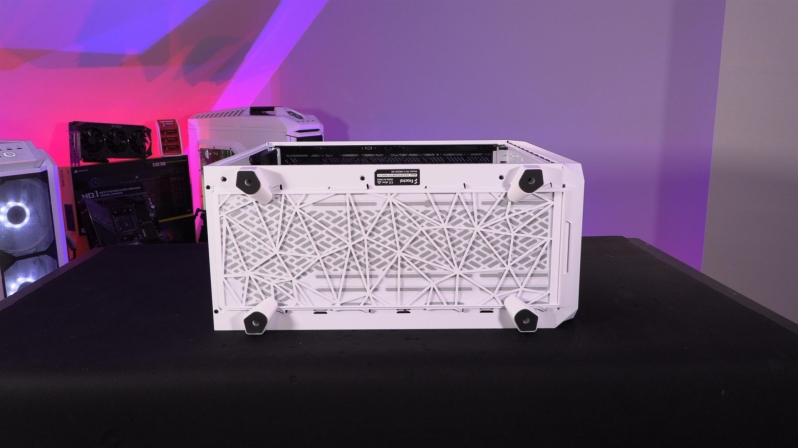 The Meshify 2 contains the same cable management system as Fractal's define 7, offering users a removable bottom cover and a generous number of velcro ties. This bottom cover can hide a lot of messy cables, and Fractal has provided users with more than enough space (30mm) to tidily manage their cables without bending or warping the Meshify 2's side panel.

We can also see the Fractal's new Nexus+ 2 fan hub, which supports three PWM fans alongside three 3-pin fan connectors. This controller allows Fractal Meshify 2 users to control up to 9 fans within their system with ease. 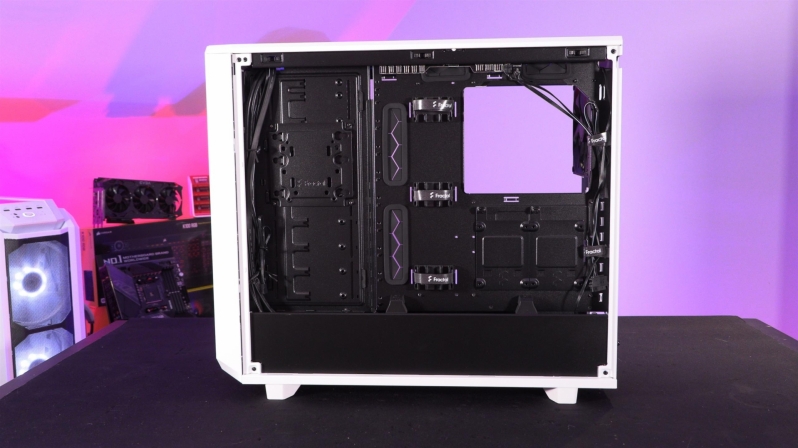 The image below shows what the Meshify 2 looks like with the above plate removed, revealing the case's two stock HDD mounting locations. 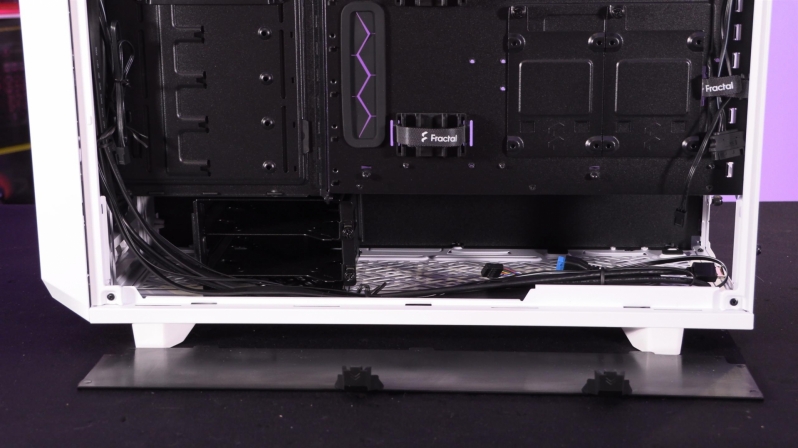