Up Close - Features and Options

Inside and outside the Hyte Y60

The Hyte Y60 is a striking enclosure, using three tempered glass panels to offer a unique wrap-around aesthetic, rather than the harsh right angles of many similar designs. Yes, the glass window of the Y60 is made up of three panels. These tempered glass panels are not a single bent panel. The front and side panels of the Y60 are removable, and that allows users to easily install their hardware within the chassis.

It worth noting here that Hyte does not recommend moving, shipping, or transferring its Y60 enclosure when its tempered glass panels are not installed. 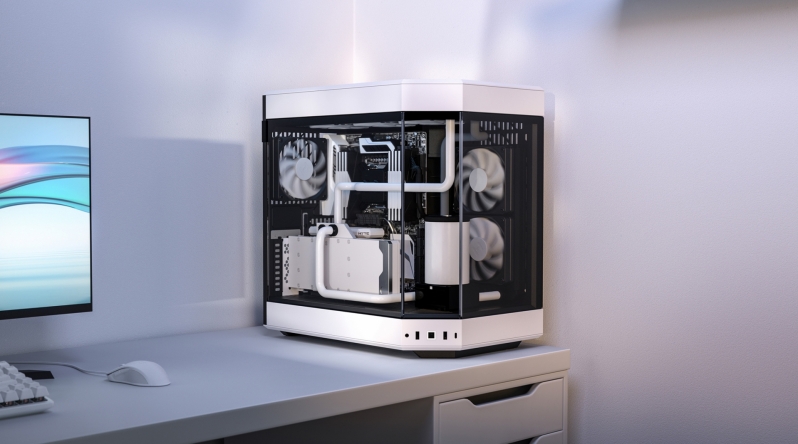 At the rear of the Hyte Y60, we can see many of the case's primary features. We can see a triple-slot vertical GPU mount, six half-height PCIe slots, and a PSU mounting location that is behind the case's motherboard tray.

Keeping the PSU in this location removes cable clutter from the main chamber of the Y60, allowing for simpler cable management. The case's half-height PCIe slots also give users room for addition I/O options, albeit in a more limited form than standard full-sized PCIe slots. These design limits were necessary given Hyte's intention to have a three-slot vertical GPU mount in a case of this size. Alongside these three slots, Hyte has also given users a decent gap between the third vertical GPU slot and the case's side panel window. This gives this GPU mount plenty of breathing space. 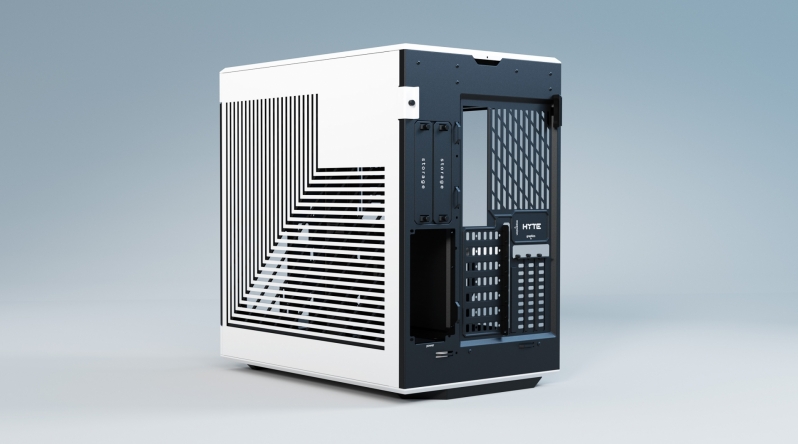 The air intakes of the Hyte Y60 follow a lined pattern that flows across the chassis. Below you can see how the lines at the top and side of the chassis flow. A similar effect is seen on the inside with case's bottom fan vent. The Hyte Y60's design is simple, yet striking. While some will compare this case with a fish tank, at least it looks like a great fish tank. 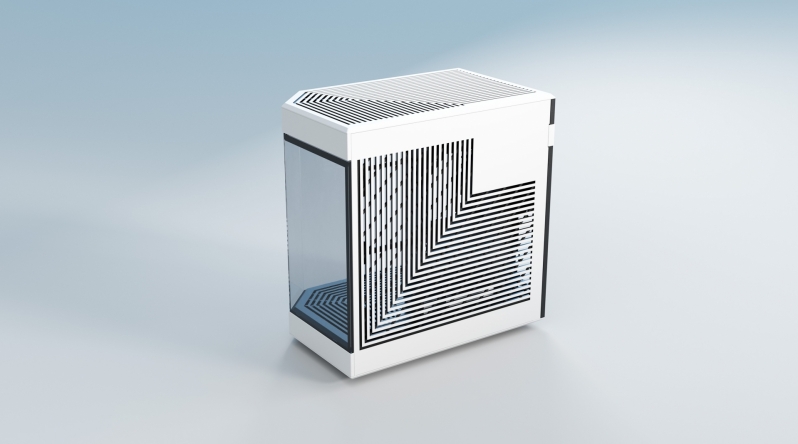 The Hyte Y60 is designed to be used with a vertically mounted graphics card, and out of the box the case ships with a PCIe 4.0 riser card that is custom designed for the enclosure. This allows for easy GPU mounting, and minimal bending of the PCIe riser cable.

Unlike other manufacturers, Hyte is only launching its Y60 chassis with a PCIe 4.0 riser cable option. Hyte knows that all modern GPUs support PCIe 4.0, and that a PCIe 3.0 option would only create compatibility issues with systems using PCIe 4.0 motherboards and graphics cards. Yes, we know that Intel has PCIe 5.0 on its latest motherboards, but when PCIe 5.0 graphics cards are not available, you can't expect case manufacturers to design, validate, and pay a premium for a PCIe 5.0 riser cable. To out knowledge, PCIe 5.0 riser cables do not, currently, exist. 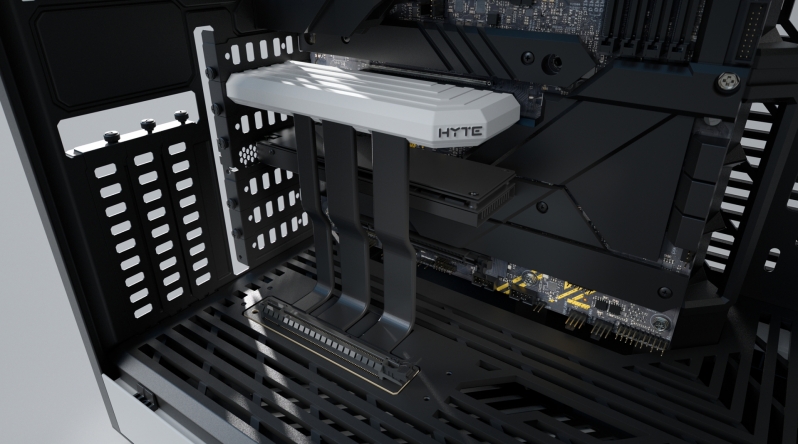 When it comes to I/O options, the Hyte Y60 features an audio input/output jack, two USB 3.0 ports and a single USB 3.2 Type-C port. The case has dust filters at the top, bottom and side of the chassis, covering all possible air intakes. 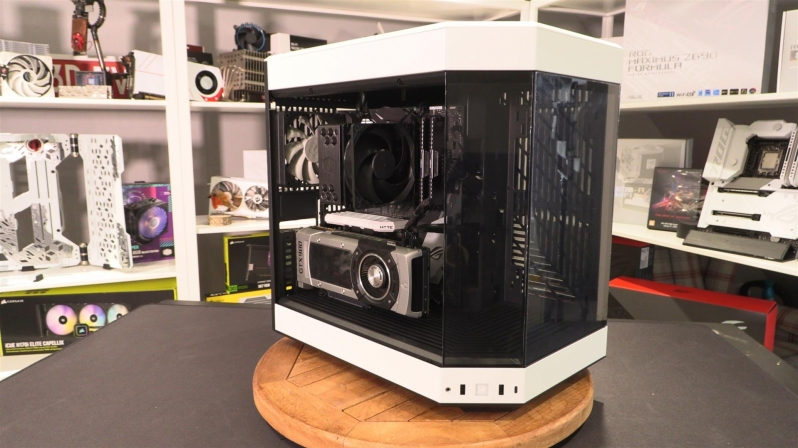 When paired with a high-end system with colour matched components, the Hyte Y60 can look striking. Here it is at the OC3D office with the company's video editing rig inside. This PC was used to edit and upload our vide review of this enclosure. 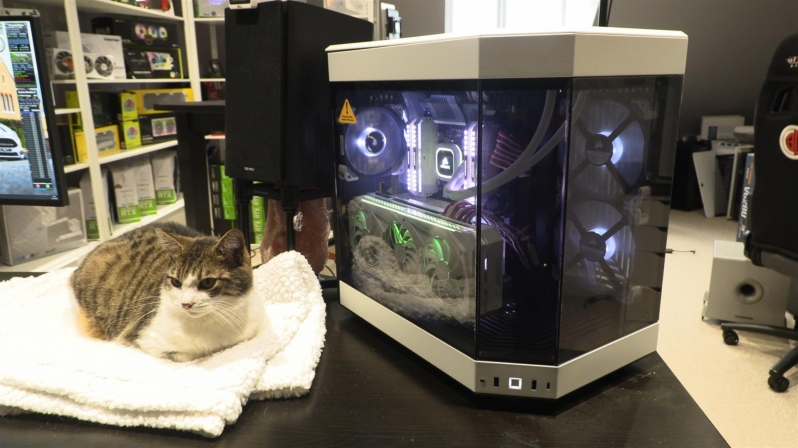 We can also see that the side of this case can support two 120mm or 140mm fans. Liquid cooling radiators are also supported in this location. 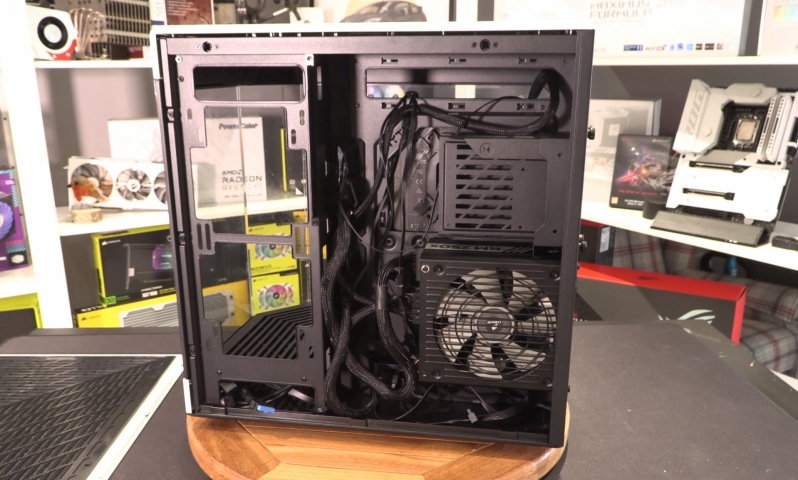 Below we can see that the Hyte Y0 uses open-style rubber grommets in its cable routing location. This can allow users to see into the rear of the enclosure, potentially revealing some cable clutter. We would prefer more standard closed cable grommets, but we wouldn't call this minor grievance a major issue. 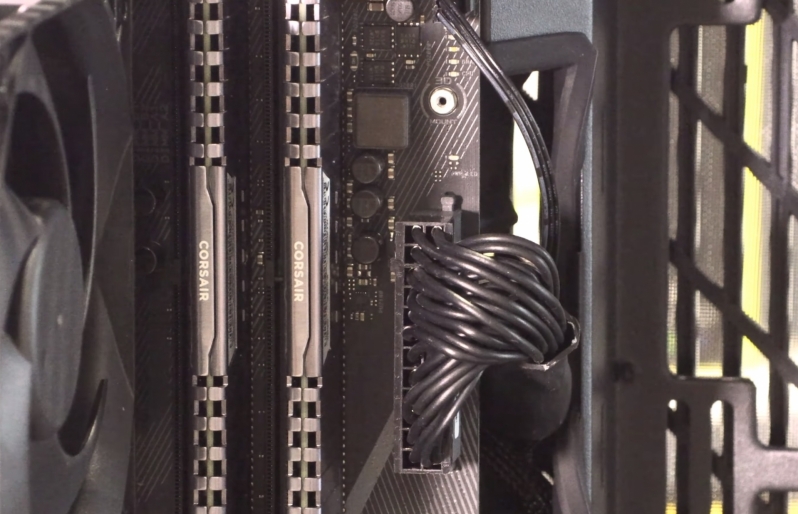 At the base of the Y60, Hyte has included two 120mm fan pre-installed as intakes. These fans blow air upwards and at your graphics card and towards the roof of the chassis. Aside from the case's rear exhaust, these are the only two fans that are pre-installed in this chassis. 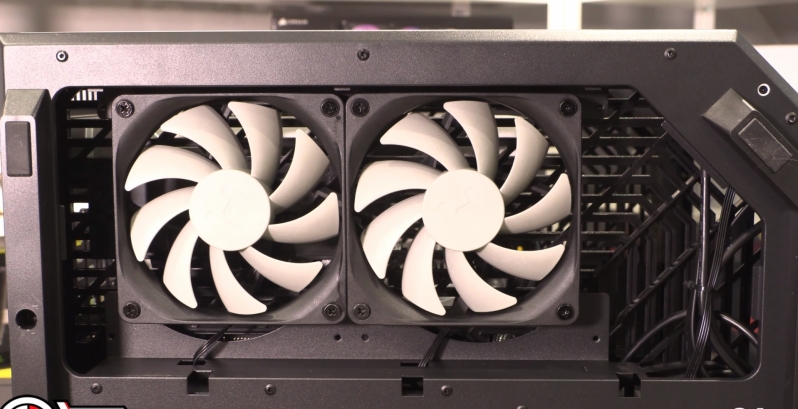 At the roof of the Hyte Y60 is support for a 360mm liquid cooling radiator or a 280mm radiator. Up to three 120mm fans or two 140mm fans are supported. This radiator/fan mount is removable, making it easy to install a radiator and/or fans up here. 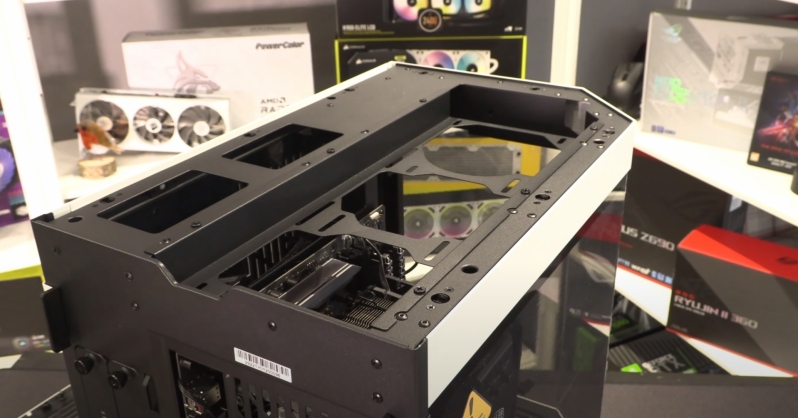 dazbobaby
As long as it's functional. It's certainly aesthetically pleasing.

Perfect for my Streaming Rig.


Now all I need to know is where do I get one?Quote

Warchild
would make an awesome Aliens theme build in there, with a creepy incubating eggQuote

Dicehunter
Quote:
Ooooooh I can see it !Quote

Peace Đ
Now put some oil and plants in it to complete the look!

For 200$ I'd expect to at least have the option for RGB, but I can see that with all the glass panels, it's still a reasnable price. I like it!
Especially the way they designed the riser cable looks very pleasing to me.Quote
Reply