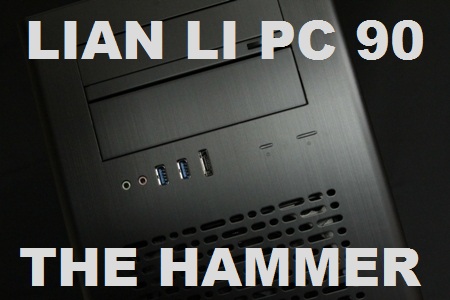 The first time I took the left side panel off the PC-90 I thought for a minute I'd gone in the wrong side as what faced me for a moment looked like the reverse side of a motherboard tray.  What we see in fact is the 3.5" and 2.5" drive mounting racks.  In a break from the traditional method of stacking HDDs vertically in bays at the front of a case Lian Li have chosen an alternate solution in the form of 2 removable struts.  Each strut has mounting holes corresponding to either 2.5" drives or 3.5" drives, both on the front and on the reverse, meaning that when fully laden the struts between them can hold a total of 6x3.5" and 6x2.5" or a total of 12x2.5".  I think it's perhaps this feature that enables the PC-90 to maintain it's marginally diminutive size whist at the same time still allowing for the very largest Motherboards and longest GPUs.  Removing the left hand strut and central cable management strut by means of a few thumb bolts we gain a better view of the internals. 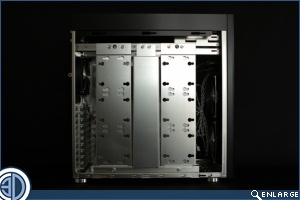 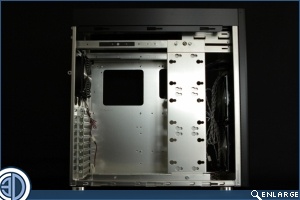 Turning our attention to the rear of the case we see that the 10 vented expansion bays as well as the rear 120mm exhaust fan.  In true Lian Li style the interior of the case, like the rear and base is presented in naked high sheen Aluminium. 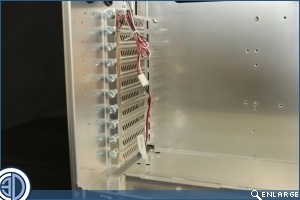 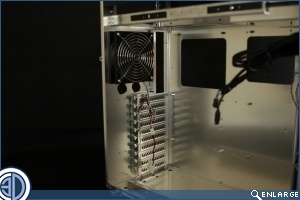 The front of the case interior is where we find the 140mm intake fans.  Two in total, with each being protected on the inside by a classic wire guard.  The front fans, like the rear 120 are fitted with removable 4pin molex adapters, allowing the user to choose whether to go straight to the PSU or into a convenient fan header.  Although not intended as a Watercooling case it looks very much to me like it would be an easy job to mount a 2x140mm rad and fans in this area.  enough room perhaps even for a push pull set up without encroaching on the space available for GPUs.  The picture below right shows the PSU mounting area.  Simple rubber strips provide sound isolation with rails running the full length of the roof and a total lack of obstructions meaning that any size PSU will fit up here with no problem what-so-ever. 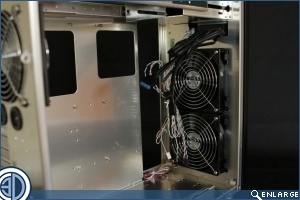 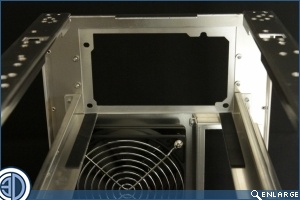 By now you may have noticed the cable management options provided by Lian Li, or rather the lack there of.  Aside from the 2 large cut outs in the Motherboard tray which are intended to give access to the rear of the CPU, (or CPUs, as this case can accommodate twin CPU Motherboards), there's not really a lot else.  The Motherboard tray ends some 10cms sort of the front of the case giving at least one place to feed the wires round but it's far from an elegant solution.  Turning the case around perhaps gives us a clearer view of the lack of cable management.  No holes, no grommets, no cable tie mounts, and worst of all, with just 12mm of clearance, no space to speak of. 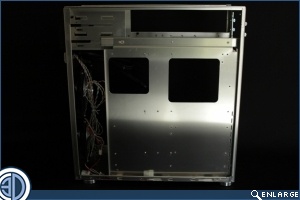 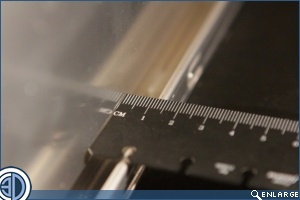