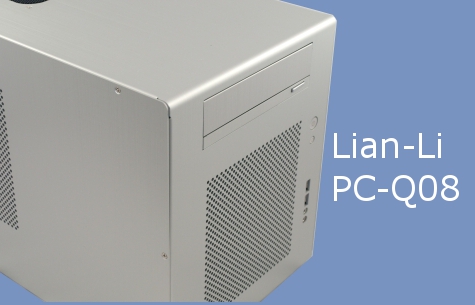 
Alas, I return to my original story. The right computer chassis will last multiple generations of system builds. They will cool today's and tomorrow's system components without fuss and they will not fall to pieces when life moves you from one location to another. From an aesthetics point of view, perhaps this case could be considered as bland. This in itself is not a disadvantage or a flaw as that's the exact intention of the PC-Q08. The fact of the matter is that flamboyant styling cues are irrelevant when a case is built and designed so well. From what we have seen and tested, we do believe that the PC-Q08 meets the criteria of the "right chassis". For that matter, there are very few Mini ITX chassis' today that are built to a similar standard.

For some, size might be a concern. Fundamentally speaking, the Mini ITX form factor (at 17cm x 17cm) should not command anywhere near this sort of space. In order to fully appreciate this case, one must realise that it is infact the high performance graphics cards, (multiple) hard disk drives and cooling requirements of overclocked processors that requires the case to be of the dimensions that it is. Perhaps in that sense it seems farcicle to opt for Mini ITX in the first place but thanks to Lian Li's ways of arranging components, the case still has a considerably smaller footprint and (in some cases) height than most Micro ATX cases. Really, the Q08 suits those who really want to stretch the Mini ITX form factor for all it's worth with the latest and greatest hardware. Those with lesser performance demands will be much better off with the smaller and cheaper Q07 chassis.

Our only gripe lies with Lian Li's implementation of LED fans. Granted, everyones tastes vary and while the fan's lighting is not too noticeable during daylight hours, it seems both excessive and tacky under lower lighting situations. To us, this appears to be a cheap way of trying to cater to those who would have dismissed this case for it's "bland" looks. For what its worth, those who are particularly offended by the LEDs are free to purchase a 140mm fan without them.

Finally as an advisory rather than a complaint, it would be wise to place the PC-Q08 case in an environment without dust - i.e.- Not on the floor. As previously mentioned, the case has ventilation holes on almost every panel including the floor. The case rests on aluminium feet but unless you want your toasty GeForce GTX 480 eating dust (or grilling your carpet) it would be advisable to rest the case on a table.

All in all, we are greatly impressed with Lian Li's new "baby" chassis. The PC-Q08 offers the best of two worlds; cooling, build quality and modularity for a price that matches its size.

The Mediocre
- LED Fans. Why?

Thanks to Caseking for the sample today, you can discuss our thoughts in the forums.