Introduction - a Mini ITX case with a lot of hardware options

We all love Mini ITX cases. There is a level of artistry to squeezing the most out of the smallest of form factors. Today, we can create some of the most powerful gaming PCs possible within a shell that's console-sized. With ITX PCs, modern PC builders make a mockery of the room-sized PCs of ages past by placing top-tier performance in cases that can often fit inside standard ATX cases.

Today, we are looking at Lian Li's Q58, a 14.5-litre chassis that supports large graphics cards, liquid cooling and a wide variety of hardware configurations. The Q58 is designed to be versatile, visually stunning and with enough airflow capacity to keep even the most power-hungry systems cool under high loads. Well, at least that is what Lian li claims.

Starting today, four Lian Li Q58 models are available at retailers, two black versions of this case and two white versions. Aside from colour/tone, the differences between these designs are their level of PCIe connectivity. The Q58 relies on a PCIe extension cable to support a graphics card, and depending on your requirements; you will need to decide whether or not you will be investing in this case's PCIe 3.0 or PCIe 4.0 version>

If you use the PCIe 3.0 version of this case with PCIe 4.0 enabled GPUs, CPUs, and motherboards, you will have blue screen issues in the future until you limit your system to PCIe 3.0 connectivity in your motherboard's BIOS. Sadly, this will limit PCIe speeds to 3.0 levels system-wide, limiting the potential of your graphics card, NVMe storage and other PCIe-connected devices. With this in mind, forward-looking consumers may find the $30 premium for PCIe 4.0 worthwhile. 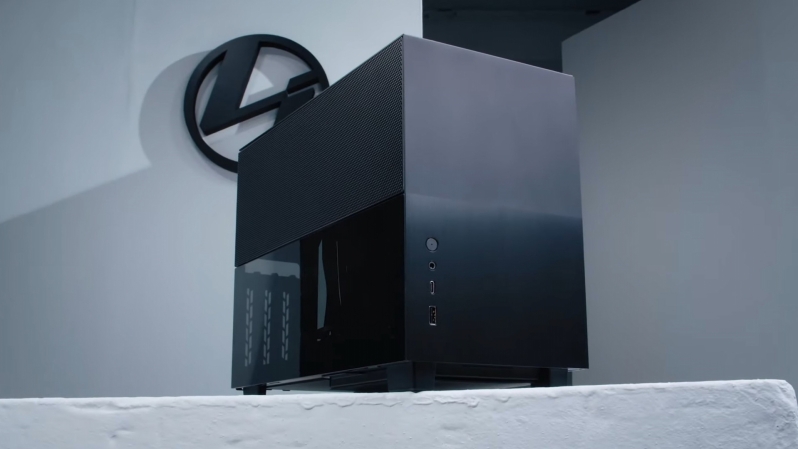 Typically, company ITX case designs push PC builders down a specific path. Typically there is not enough space to give consumers the luxury of choice, but with the Q58, Lian Li has upended normal expectations for the ITX form factor.

The Lian Li Q58 supports both SFX and ATX power supplies, giving PC builders the ability to use whatever PSU they want, assuming that their ATX PSU isn't longer than 160mm. That said, using ATX power supplies will limit liquid cooler compatibility, as ATX PSUs will push into the space otherwise allocated for 240mm or 280mm AIOs and radiators.

Lian Li has designed their Q58 chassis with SFX PSUs in mind, but adding ATX support gives the chassis some much-needed versatility. This provides the Q58 with a larger potential userbase, giving users options that many other small ATX gaming cases don't. 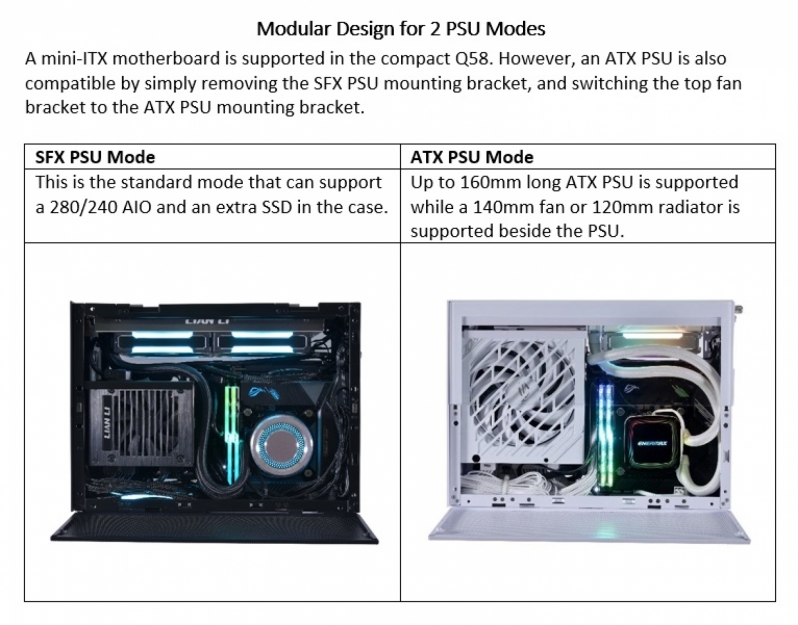 In the US, the MSRP pricing of these cases are $10 higher. Lian Li has stated that these higher prices are due to "US tariffs". 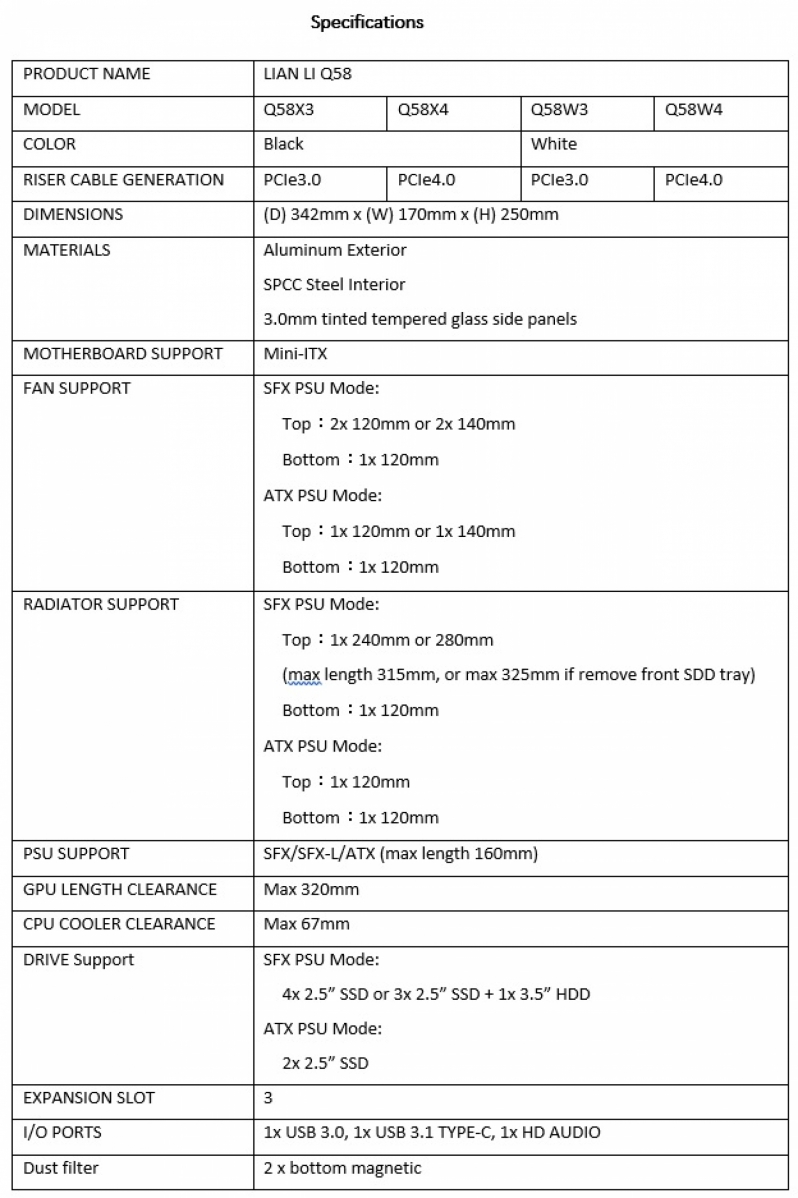 CalVic
I've never built an ITX before, but I quite like the look of that case for some reason. Not entirely sure the cost difference between PCIe 3 and 4 is justified though.Quote

Avet
Quote:
Yes it is. Do you know what a pain it is to boot a system with Gen 4 card using a Gen 3 riser cable? You need a Gen 3 GPU or iGPU.Quote

AngryGoldfish
Yeah, Gen 4 PCI-e riser cables are what most people should be getting if they plan on using modern cards. It's not a matter of bandwidth; it's a matter of not being able to get anything else to work. It's 100% worth the extra €40 that they cost.Quote
Reply