Noctua utilise the Secufirn2 fitting method for the D15.  We've come across this method before with other Noctua coolers and have always found it simple and effective.  Step one is to attach double ended bolts to the motherboard or through to the supplied backplate if required.  These are then topped off with a pair of brackets, the brackets varying depending on whether you're going AMD or Intel. 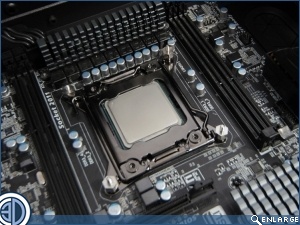 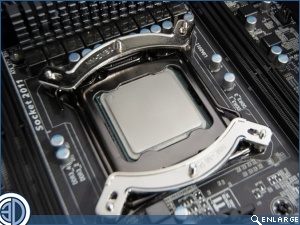 These brackets are then bolted down using the supplied hex head nuts.  What's that?  Don't have a screw driver?  Not to worry, Noctua supply you with a large Allen key style one in the accessories pack.  The cooler is then placed carefully atop the brackets so that the central threaded pins line up with the threaded sprung holes in the fin stack bracket.  This bit can be a bit fiddly but it's a damn site easier than having to reach under a fin stack to try and do up bolts you can't even see never mind get a spazzy spanner on.  The final act is to push down hard on the sprung loaded thread sections to get them to engage with the threaded pins.  Take case when doing this as slipping with the screw driver will lead to it gouging its way across your motherboard. 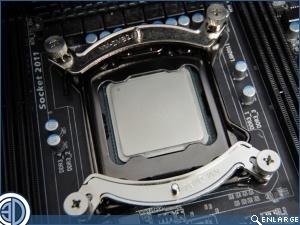 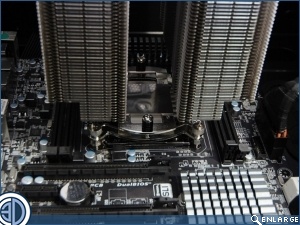 The images below are taken at slightly different angles and hope to show how with the front fan removed there's plenty of room under the fin stack step for tall RAM.  With the front fan in place however it's quite a different story.  The front fan is actually just touching the top of our RAM leading it to project some 15mm above the upper plane of the heatsink, as we suspected, bringing the overall height of the assembly to 175mm.  We also couldn't believe that we were going to have to comment on how close it gets to the 24pin ATX power cable and socket 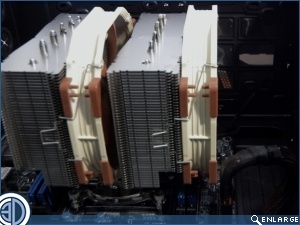 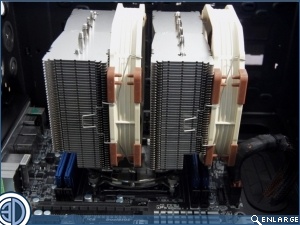 It's also pretty much a cert that you're going to lose your first PCI Socket, so let's hope it's nothing important like your main GPU socket for example. Its woth making very clear not all motherboards are laid out the same, on many boards your first PCIE x16 slots for graphics can be the second slot down on the back of your case. If your motherboard is laid out like this you wont have a problem with the D15. If as in our photos the first graphics slot is right at the top then you will run into problems. 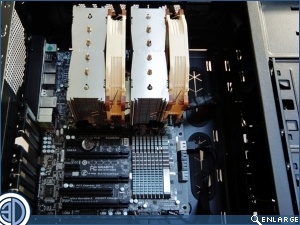 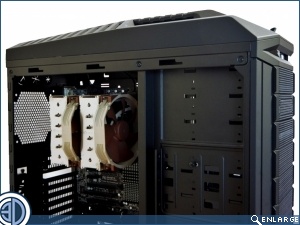 There aren't too many coolers out there that can look like they fill the interior of the Cooler Master "Test Trooper" case we use for our heat sink testing.  The Noctua NH-D15 however looks quite at home. 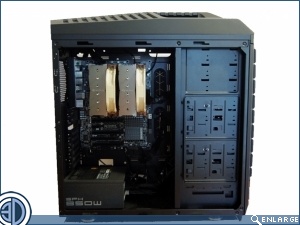 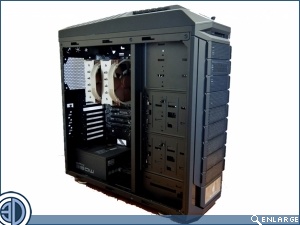