We have mixed feelings about the H510 Flow. It is undoubtedly a better case than NZXT's original H510 for GPU thermals and overall airflow, but it is hard to justify this case's £89.99 price tag given how similar this case is to the older, standard H510. Currently, the standard H510 is available for £69.99, and recently we have seen pricing as low as £59.99. Don't get us wrong, we love the H510 Flow. Our problem is that its pricing is a little questionable.

In essence, the NZXT H510 Flow is an old case design with a new front panel, making it hard to see why this case costs almost 30% more than its standard counterpart. That said, our thermal results speak for themselves, making it hard to consider choosing a standard H510 over NZXT's new H510 Flow.

This is why we are conflicted. We feel that the H510 Flow should be closer in price to the standard H510, but it's hard to say that the extra £20 isn't worth it when such large drops in graphics card thermals can be achieved. In a world where high-end GPUs are getting hotter and more power-hungry, it is hard not to see the H510 Flow as a significant upgrade over NZXT's older H510 models.

Internally, the H510 Flow is similar to its predecessors, offering users the same cable management features, internal layout, radiator/fan options and component clearances. In this regard, you could read any H510 review and find out everything you want to know about the H510. All you would need is some updated cooling/thermal results for the H510 Flow.

NZXT's H510 Flow tells a simple story. It highlights how well-directed airflow and unrestrictive front panel designs can transform the thermals of PC cases. Previously, NZXT's H510 series was known for its looks, not its airflow. Thanks to the H510 Flow, NZXT can now offer their customers H510 aesthetics and excellent airflow. Not bad for a sub-£100 case. 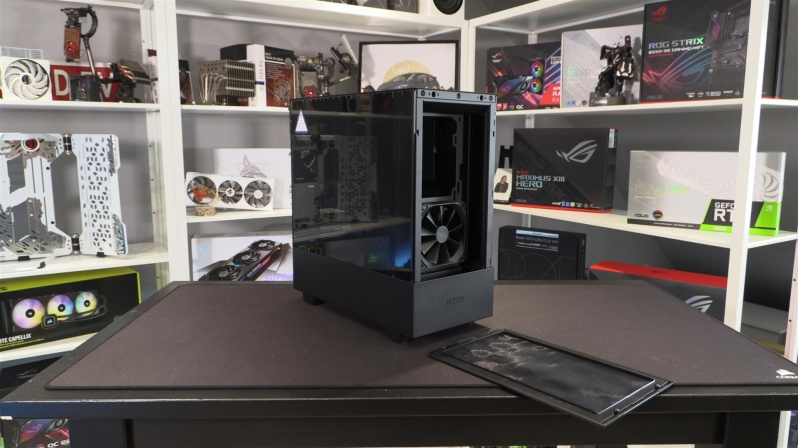 Our thermal results for the H510 speak for themselves. When compared to a standard H510 series chassis, we achieved GPU temperatures that are up to 7 degrees cooler in like-for-like workloads. Those are colossal temperature shifts, which prove why airflow-oriented case designs are the best for gamers.

NZXT has made a lot of gamers happy with the release of their H510 Flow. Now, PC gamers can have that H510 look without compromising on system airflow. Now that the Flow exists, it is a lot harder to recommend the original H510.

The NZXT H510 Flow builds upon an already successful case design, optimising it for gaming workloads with GPU directed airflow and no unnecessary airflow restrictions. There is no doubt that the H510 Flow is an excellent PC case for gamers. Our only gripe with this case is that we don't see why it should cost almost 30% more than an H510. Perhaps this can be explained by material shortages, rising shipping costs and other related issues. That said, we would love this case to cost a little less. £79.99, perhaps? That said, it is up to you whether or not you think the H510 Flow's current asking price is worth it.

So is the H510 Flow worth it? We think it is. While pricing isn't where we would like to see it, the case's design improvements are enough to make it worthy of consideration over NZXT's older H510 series enclosures. This case delivers excellent GPU airflow out of the box, making it an ideal gaming case for most customers. Aesthetically, this case looks just as good as NZXT's other cases, and functionally, the H510 remains as good as it always was. For all that, the NZXT H510 is  OC3D Approved.

You can join the discussion on NZXT's H510 Flow on the OC3D Forums.