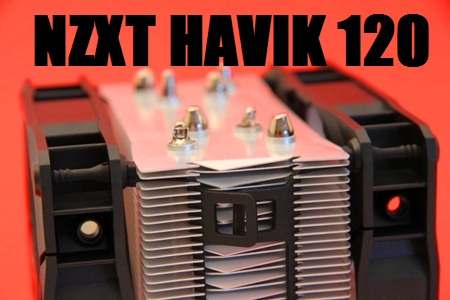 The Havik is marketed essentially as a smaller version of the Havik 140.  That being the case you'd expect the 2 units to look pretty much identical, or at the very least to share certain visual attributes and perhaps technologies.  In essence you'd be forgiven for expecting to see that the the Havik 120 was simply a scaled down version of the 140.  I'd forgive you, I really would.  You would however still be wrong.

The Havik 120 differs from it's bigger brother in quite a few ways.  I don't just mean that they have different number of heat pipes and one is physically bigger than the other.  The fans are different, with the Havik 140 model using a round cowling 140mm 9 bladed fan with curved blades, and the Havik 120 using a more traditional square cowling fan with 13 straight blades.  The outer edges of the central portion of the 120s fin stack are inclined together in pairs, whereas the 140s are left straight.  The layout of the cooling pipes within the fin stack also differs between the two units with the 140 having 2 linear rows of 6 pipes, and the 120 having two groups of 4 each clustered towards the outer margins of the fin stack.  The 120 has the "honed" leading edges of the fins where as the 140s are left un sharpened.

What we really want to know of course is have these changes been for the better, or worse still has the change in the formula  used for the  Havik 120 removed some of the established performance strengths of the Havik 140.  Well I think the performance graphs speak for themselves to be honest, but just in case you never read that bit and skipped straight to the conclusion (shame on you) let me re cap.  At 4.0GHz The Havik 120 betters both the Enermax T40, Thermolab Trinity and the Hyper 212S.  Perhaps no surprise, these are single fan units with slim fin stacks.  It then goes on to better the and the Hyper 612s and then not content goes on to better the Dark Rock Pro, which is a much much bigger cooler, and by a nats todger narrowly misses getting the better of the Promlimatech super Mega.  At 4.2GHz things aren't so good coming bottom of the pile but not far off the Prime and the DarkRock pro, both of which, like the majority of coolers in the 4.2GHz club are big beefy units with all the associated RAM and case side clearance issues often found with large heat sinks.

So we've established that the Havik 120 differs from the 140 in a great many ways, but then remember we said these two coolers were brothers we never claimed they were identical twins.  I think we've also established now that although the Havik 120 differs from the 140 it shares many of it's strengths.  It's simple and elegant looking, with a trendy black and white finish.  It's relatively quiet even at full revs.  It's well accessorised with the inclusion of fans splitters and spare bungee.  But most of all it gets the job done.

Lets just take a moment to reflect on this cooler.  Think about it.  This is a 120mm cooler that's capable of playing with the big boys at 4.0GHz.  It betters many of the coolers in it's class and even a few that are more expensive and physically bigger.

At 4.2GHz it's still able to stand up for itself with only the big boys beating it.

So we're looking at near big brother performance in a much smaller package.  If space and/or cash are a bit limited and you're in need of a 120mm cooler as opposed to one of the monsters, but you still want to clock that CPU then the Havik 120 is a reasonable idea.  I think NZXT have just earned themselves another Gold!

Thanks to NZXT for the Havik on test today, you can discuss your thoughts in our forums.

chudley
Nice review Gary, As I am on the daughters laptop atm I had to scroll up and down to compare fan results, what might help others in the future would be a vertical red bar of the temps achieved by the item in question.going up through all results for easy comparison.Quote

Excalabur50
Sounds great for those with limited space or a tight budget seems NZXT are lifting their game nice to see.Quote

Jason-CL
Quote:
It's because we've upped the amount of time we spend whipping our designers, I assure you. :b

G-Dubs
the 120 really is a nice bit of kit. Whatever it is NZXT are doing it seems to be working.

This lady with the whp, does she take bookings?

Ghosthud1
£46 seems steep for a heatsink of this performance level. Actually all heat sinks are starting to sink into much higher price brackets! what happened to the ocz vendetta that stomped everything at £28Quote
Reply