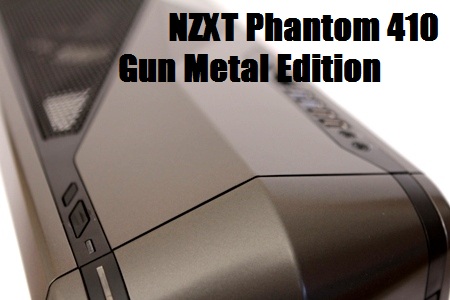 The Phantom 410 has actually been around for a litle while now, and I guess is one of those "Marmite" cases you either do or don't like the looks of.  Having not seen an example of the case in the flesh here at OC3D towers before the release of the special editions I really didn't know what to expect.  To an extent, I was a little concerned that with the amount of plastic in use for the roof and front panel mouldings the case would feel cheap.  I needen't have worried however as the plastic is good and thick and the quality of finish very high.  The door in particular is worth a mention.  It would have been very easy for NZXT to just have a single plastic moulding to make up the door.  Instead the door is formed from several sections that screw together to give it a sense of depth and rigidity.  it's exactly this sense of strength and rigidity that's carried through the rest of the mouldings.

Looks wise the only thing i'm not overly keen on is the use of a split window and vented section on the side panel.  I'd have preferred to see a full size window or perhaps a continuation of the window down over the vented area.  Still, nothing a Dremel won't sort out eh?  So we've talked about looks and quality, but what about that colour?  "Gun Metal".  It really is deep and lusterous and quite unlike any case colour I've seen before.  Rather annoyingly it is in fact the exact same colour I was looking for to paint a Chassis I modded a while back but was unable to find.  I guess NZXT must've been reading my mind.  Remember that although this is the Gun Metal colour there are 3 other colours in the special edition range, in the form of Gloss Black with Orange trim, White with Blue trim and Black with White trim. Of these I'm particularly drawn to the black and Orange theme, and if you've seen my mods you'll understand why.

Inside the case then and although there's not a great deal of room, there is actually enough.  Remember this isn't a super tower case, it's just a Mid tower so you're not going to be able get in there with your hardware.  It's big where it counts though (ahem).  with plenty of GPU room with and without the removable HDD rack, and good CPU cooler headroom to boot.

The build process was a pleasurable one, made even more so by the generous provision of 27 cable tie mounts.  Other case manufacturers should take a leaf out of NZXTs book here.  Something so simple as cable tie mounts can make a job so much easier and the result so much nicer.  The only real gripes I have about this case are very small ones, in particular the grommets which come away a bit too easily and never quite seem to sit right once they've been re attached, and the absence of any real fan filters

The inclusive cooling is also on the generous side, with 3x120mm fans and 1x140 fan.  Room for an additional 120 in the front, the floor and side panel and an additional 140 in the roof, as well as options for water-cooling mean this case has it where it counts when it comes to cooling.

In use the case is very quiet even with the fans at their highest setting.  Not the quietest i've heard, but by no means the loudest, and certainly not intrusively loud.  Drop the fans to their lowest speeds via the integral 3 position fan controller and the noise footprint practically drops of the radar.

So what of the competition?  Well there's nothing out there that really looks quite like the 410 apart from perhaps the Aerocool Sixth Element but that's not really in the same league quality and performance wise.  I guess we have to compare to such cases as the Graphite 600T which does have slightly less vanilla looks than say the CM690II but at £140 is a good £30 more expensive than the 410.  Shop around and you can find some full tower cases at around the £100-£120 mark, such as the Raven, the Colossus and indeed the full size Phantom, but if it's a mid tower you're after as you don't want something the size of a wardrobe sitting on the desk beside you then the 410 is is something you should give serious consideration to.

So is it getting a gold?  No, but it's not off by much.  With the release of the special edition colours NZXT have perhaps missed a bit of an opportunity in that they could perhaps have taken the time to rectify a few of the niggles raised when this case first came to market.  We're not talking big issues here, but a trick has most definatley been missed.  If the release of the new special edition colours had been combined with the addition of fan filters and a bit of an upgrade to those grommets then the Phantom 410 could have been the proud owner of a Gold award.  As we're not into making an alloy of gold and silver awards here at OC3D then a Silver it has to be.

Thanks to NZXT for the case on review today, you discuss your thoughts in the OC3D forums.