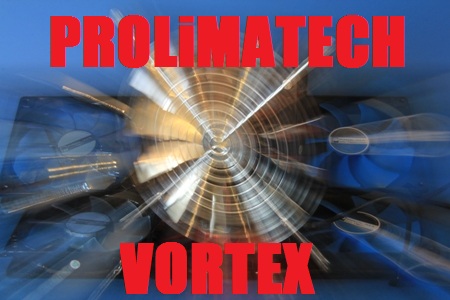 Remembering that in assessing fans we must of course obey the Holy Trinity, namely Shift air, look good, be quiet.  Lets first have a look a the 120mm Vortex fan.  Shifting air 72.67 CFM is quite a lot of air to shift, even for a 1600rpm fan.  You can actually feel the amount of air moving of the back of the vortex when compared to other fans in the same group previously tested.  With this in mind I was expecting great results on the old heat sink test (torture test as per our Heat-sink reviews).  However the 120mm only managed to keep the i7 950 at 4.0GHz down to a max temp of 74.25, which with a room temp of 19.5 yielded a DeltaT of 54.75, exactly the same as the BitFenix Spectre Pro which is only a 1200RPM unit as opposed to the 1600RPM of the Vortex.  I can only assume that the Vortex has a much lower static pressure than most of the fans on the table below, however as yet I've not been able to track any figures down to evidence this.  This 120mm and the 140mm version are described by ProlimaTech as being specifically designed to work with the Armageddon CPU cooler, so one can only assume there's a balance being struck in there somewhere as the Armageddon is undeniably a good cooler.

Noise wise the 120mm does let itself down a bit, with a manufacturers rating of 29.1 dB-A it's well above all in the table above with the exception of the ear splitting 5400 GT.  With the dB-A being a logarithmic scale a 10dB increase equates to a doubling of perceived noise.  Meaning that in simple terms the Vortex is nearly twice as loud as most of the fans in the table above.  When I review fans below mid 20s dB-A it's usually fair to say they can be slightly audible but generally almost imperceptible, not so the Vortex I'm afraid, it can be heard quite clearly over the general noise of the case and room.  this fan being a 1600rpm model though it is perhaps a little unfair to compare it to the above fans which are for the greater part low rpm models.  To place the vortex in a better perspective let me compare it to a personal favourite which is the GT 1850.  The 1850 also generates 28dB-A of noise but only produces 58.3 cfm.  Not bad by comparison really.

Moving to the 140mm we see a drop in RPM to 1000 and a commensurate drop in dB-A to 18.1 (although the companies own website doesn't appear to be able to agree on whether it's 18.1 or 17dB-A).  Either way to me they sounded a bit louder than the 18 dB-A quoted, not much though, and still certainly quiet.  With the slower fan speed does come a lower CFM, down to 87.  It should be mentioned that both the 120 and the 140 models come with voltage regulators which slow the fans down, and do noticeably reduce the noise still further.  However, there's no such thing as a free lunch so do expect a drop in performance also.

And so to looks.  Like most people I do like shiny things but strangely here I prefer the matt simplicity of the Non LED version of these Vortex fans.  That's not to say the LED version isn't nice, it is, I just in a world of LED fans the simplicity of this non LED is quite refreshing.

Ahh, the 140mm Aluminium.  I'm in love.  It's stunning, it really is, the photos just don't do it justice.  dB-A wise it's rated the same as the 120s at 28dB-A yet for some reason it sounds louder than them, perhaps it's the way the 13 Aluminium blades cut the air.   I love this fan I really do but it's a bit like a having a stunningly attractive yet gobby girlfriend.  She has jaw dropping looks, you know your friends think she's hot.  When men see her they stop and stare.  You're the envy of anything with dangly bits between his legs.....that is until she opens her mouth, because when she speaks...loud and gobby....the illusion is shattered.  This fan is loud, but don't get me wrong, it isn't in the same league as the jet engine GT5400, but it is louder than you'd expect something so stunning and delicately beautiful to be.  You love her to bits, you really do, but god if only she could be quieter!!!  But would you dump her because of that????  Heck no, not when she looks this good.

So how to summarise.  Well it's not really that fair to make direct comparisons between these fans and those on the chart as they are predominantly low RPM models.  The Vortex series and in particular the non LED versions have a feeling of good solid reliability.  We know they perform well with some heat-sinks, but not so well with others, and we know although louder than the fans above they're no louder than the well respected GT 1850.

Would I buy them?  yes I would, especially when you bring price into the equation.  with the 120s coming in under a tenner, and the 140's not much more they certainly represent good performance at a great price, and price is something we're all having to think more about these days.  Now if I could only find a way of gagging the Aluminium Vortex I wouldn't be afraid to take her out in public.

Pricing is a little sketchy on the Aluminium Vortex, with estimates putting it in the £20 region.  Frankly I don't care I want her and I want her bad.  She not might be as quiet as I'd like, but my god is she gorgeous and for that reason I have to award a Gold.

Thanks to Prolima Tech for the fans on test today, you can discuss your thoughts in the OC3D Community forums.

Excalabur50
Those aluminium fans really look the goods nice to see something other than plastic get some good lighting on those and OMFG!

badtaylorx
i wonder if a small (1cmx1cm) square of bitchathayne/dynamat/ice&water shield (stuck on the back of each blade) would kill the reverberation of the aluminum fan quieting it down???Quote