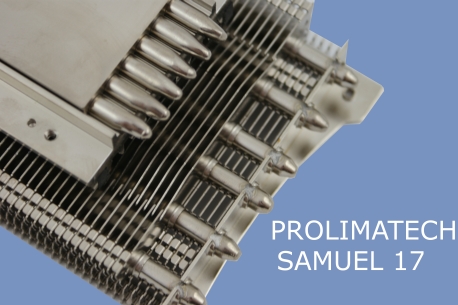 Thousands of years ago in an angry world with no technology and limited infrastructure, stood two mighty men; David and Goliath. Despite the unfair advantage that mighty Goliath possessed, he was defeated with a single blow to the head, leaving David victorious. Today we will be taking a long hard look at a Processor cooler that is touted as David's second coming. Ladies and Gentlemen, the Prolimatech Samuel 17.

Indeed if you put two and two together, you'll realise that the cooler on test today is infact a smaller than average heatsink, when compared to many of today's offerings. I suppose if one were to take a Samuel 17 to a person's head, it could induce a significant amount of damage but that would be missing the point.
In a nutshell, Prolimatech reckon that they can squeeze a serious amount of cooling performance out of a small package. To really understand what they've done, let's take a look at it's specifications.

Sounds rather interesting no? Let's move onto the photo shoot.

silenthill
I think this cooler could be a great solution for those LAN party fans.Quote

silenthill
Hi tom just wondering if you have anything coming up on the GTX 460.

tinytomlogan
The 260 fella? Thats old tech so no matey. If you mean the 460, then yes Mul who wrote this review will have a review live on Friday.Quote

silenthill
Really sorry mate I mean the GTX 460, Ive just finished reading a review on it and it seems like the guys who have bought the GTX 465 are going to have to sell them on EBay, nice one from NVIDIA youve just made a lot of customers very angry. Looking forward to Mul review on Friday.Quote

and its got a [email protected] bit wooo