If you're a fan of full on high airflow gaming cases with large expanses of mesh, doted with extraneous knobs and excrescences then the Raijintek Metis is most likely not the case you're looking for.  If however you like your cases small and perfectly formed we think you might be in for a treat, because at just 190x277x254mm, it's certainly small, and with well fitting Aluminium panels finished to a very high standard in a variety of colours it's also perfectly formed. 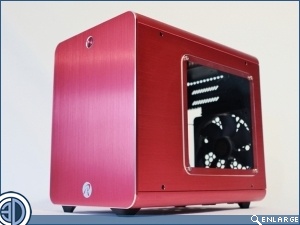 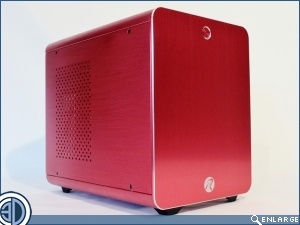 Both side panels are is secured by four simple black cross head screws, with the right hand panel having a small clear window through which to view the goodies inside.  The window is also secured with screws, having nuts to the rear making it the work of seconds to remove it.  The left hand window is left blank but does benefit from extensive ventilation holes which have been drilled neatly into the Aluminium panel. 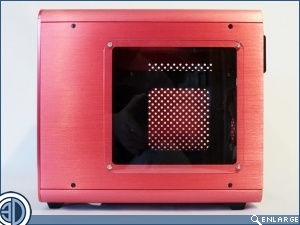 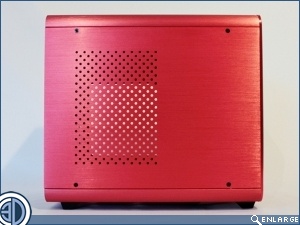 As we thought the pictures and the measurements given don't really enable you to gain a sense of scale we thought we'd show the Metis next to a few items that might enable you to get an idea of just how small it is.  Strangely when you do the maths on the Metis, it's pretty much the same volume as the recently reviewed ID Cooling T60 SFX, in fact it's fractionally larger but somehow doesn't appear to be quite as big in the flesh. 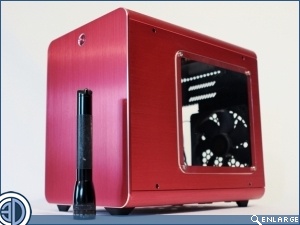 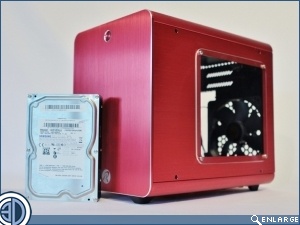 The roof of the Metis is formed from a single sheet of Aluminium which curves down at the edges to meet up perfectly with the side panels.  A pair of USB 3.0s and a set of HD audio sockets grace the front of the roof, and although they do break up the lines a little they are not too intrusive.  The front panel is again Aluminium, formed flat but with a polished bevelled strip around its outer edge, adding just that little bit of class and distinction to the case.  A colour matched vandal style power/reset button is found centrally located towards the upper margins of the front panel. 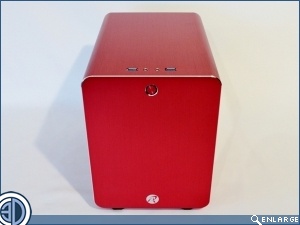 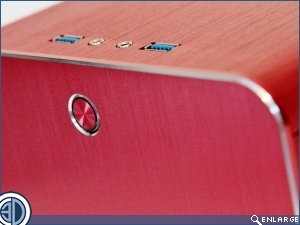 The rear of the Metis is a pretty cramped affair, with a single 120mm fan extracting next to the rear I/O.  There is though still room for a pair of PCI slots with a ventilated area above them, meaning that your GPU will have a bit more room to breath.  The base of the case is also finished in the same hairline brushed Aluminium as the majority of the exterior.  A large cut out at the front is provided for the PSU, while the other holes that can be seen are utilised in mounting storage devices. 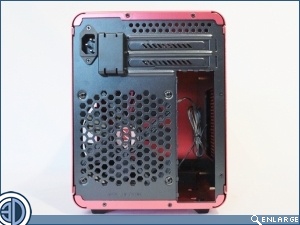 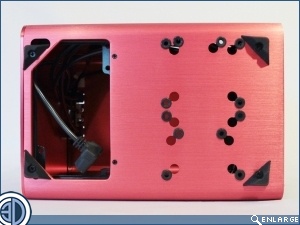 Thelosouvlakia
This looks like one of the perfect cases for budget APU builds...
Raijintek should have gone with SFX PSU....Quote

Feronix
This is actually a VERY interesting case. I could see myself using this for the smaller form factor client builds. Which usually use on-board graphics.

If you want to game though, I just checked and the Asus GTX970 DCMOC is exactly 170mm long...Quote

m2geek
dear GOD that thing is UUUUUUGLY... I wouldn't even build a PC for a mother-in-law in that.Quote

metismate
Anyone interested in this case should note that airflow is definitely an issue. For some reason it comes with the sole case fan configured as an exhaust. Since the PSU is already an exhaust, that fan absolutely must be switched around to an intake unless you want cook eggs on it, as there are very limited places for air to be pulled in. Some people have done tests that confirm that this works much better.

* it is not necessary to remove the PSU bracket to install the PSU, there are cutouts in the case to get a screwdriver in for the PSU mounting bolts. That said,the fact that you can remove it, or the entire aluminum skin, with just a few screws, does help ease build-time headaches.

* the power switch is circled by a white LED that turns red for HD activity. Note that there is no reset switch!

* it might be possible to mount a 120mm radiator in the back, but you'd have to make sure it did not interfere with any drives mounted in the bottom, or the graphics card at the top.Quote
Reply