The Triton comes with a whole raft of fittings for both AMD and Intel, including some of the older sockets out there such as 775 and 1366.  If you're on anything else other than 201x then you'll need to use the supplied back plate but as we're on toasty 2011 we won't be needing it.  Unlike a great many mounts where the screws fit to the mobo before having the bracket and pump clamped to them, the Triton system requires that you mount the supplied mounting bracket and motherboard stand offs as a single item, so having threaded the stand offs through as shown below we then had to take them off in other to attach the bracket. 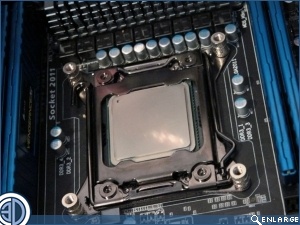 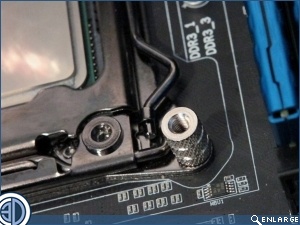 So with the stand off removed we now have the job of laying the PC flat on its side, balancing them over the motherboard holes and then balancing the mounting bracket on top before finally screwing through the stand offs and into the motherboard.  The process is precarious, but we think most likely easier if you're using a back plate as it is screwed in place before the shenanigans up front begin. 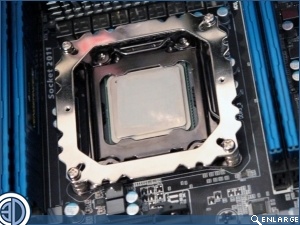 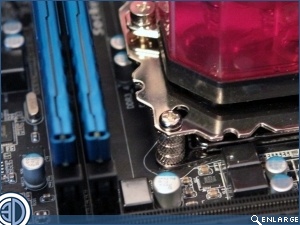 The mounting plate does actually overlap some of the caps surrounding our socket, so if you've got anything tall in the CPU area you might want to consider whether the Triton will fit your board.  With the power on though the white LED shining through the red dye does look quite effective. 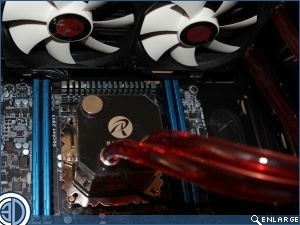 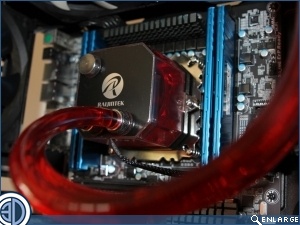 At 57mm thick, the radiator fan assembly is a bit of a squeeze into the top of our venerable Cooler Master "Test Trooper", mainly due to the 8pin CPU power cable and plug being in the way.  We do though think the red colouring looks the part as we were more than a bit concerned it would look to wishy-washy. 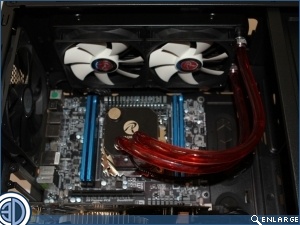 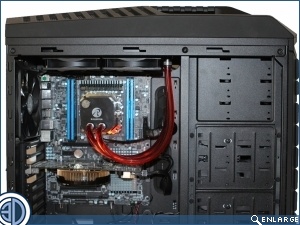