As usual we'll be testing our coolers at varying  levels of overclock and increasing levels of voltage.  this in turn of course means increasing levels of heat which the coolers need to dissipate.  To begin with we start with the undervolted stock speed.  Why undervolted? well if you have things set on "Auto", you may well be using more volts than are actually required to run at the chosen frequency, for example our 3960s will run quite happily at just 1.1volts, solid as a rock, 24/7, and as such we use this as our starting point.

The Triton doesn't ship with any fancy pants control and monitoring software, but there is a small rheostat speed control attached to the fans, so we used this to set three speeds.  The High setting was just that, fill tilt at 12 volts as always.  For the Medium we stopped the fans down a bit to about half way, a level roughly equivalent noise wise to the balanced setting we use on other systems.  For the "low we wound the dial all the way to its other end stop.  At this level the fans were essentially silent so much so that we could now hear a faint hum from the pump.

From the results it would appear that at the High setting the Triton holds it's own, with the Medium and low coming way down the graph.

At the higher levels of heat generated by the increase in voltage required for the 4.0GHz overclock, fan performance, although still a factor becomes less critical, replaced instead by a coolers ability to conduct the heat up the heat pipes and more crucially the total surface area of the fins enabling convection to the atmosphere.  In the case of AIOs and water cooling the surface area of the radiator and the efficiency of the contact plate begin to play more of a factor.

At high settings the Triton is again up there challenging the big boys.  Very impressive performance indeed.

This is where we start to separate the men from the boys.  The Triton has slipped a bit but is still in the top five.  Best we don't look at the Medium and low setting scores as they're quite frankly embarrassing. 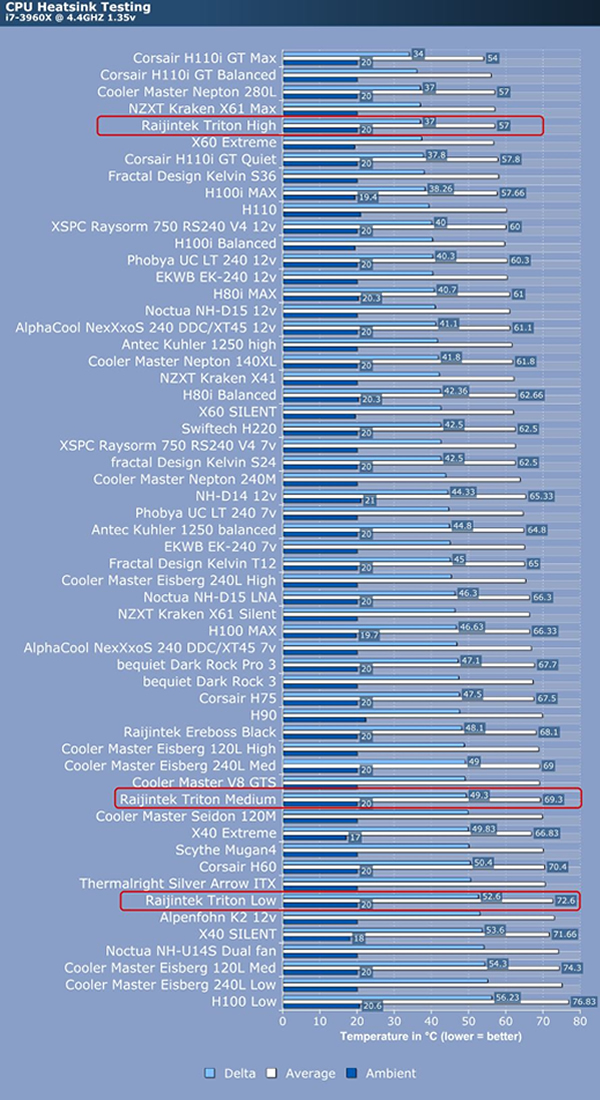 Finally our 4.6GHz test. Don't be fooled, this is an extreme test and the graph reflects this, you will only see the very best featured in this graph.

If we really want to measure outright performance, this is where we do it.  Most consumer systems don't generate anything like the heat of 2011 so if it works here it'll work anywhere.  As suspected, the Medium and high fan settings have seen the Triton slide off the bottom, but at high fans it's still representing itself well. being only 3.6 degrees off the mighty 110i GT and just pipping the H105 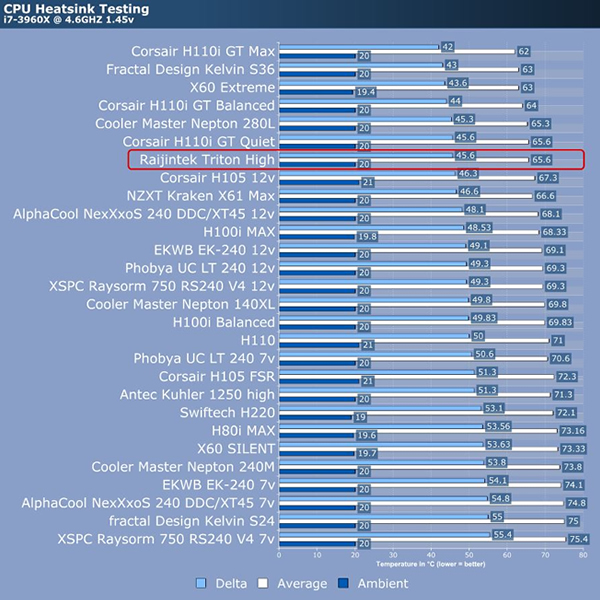