Up Close: Interior Rear and Stripped

Up Close:  Interior Rear and Stripped

OK, so there's a lot going on back here so let's get started shall we.  As we saw from the front, there's a great many cable management holes, all of which have good sturdy rubber grommets.  The rear is all on one plane so the depth is equal across its width.  The main cables are pre-routed up the centre of the case, with Riotoro providing four velcro style fasteners.  Aside from the central channel, there aren't actually a great many other cable tie points, however, the ones that there are have been well placed, although a few tie points on the right hand edge near the rear of the case for the routing of the 8pin CPU cable would have been nice. 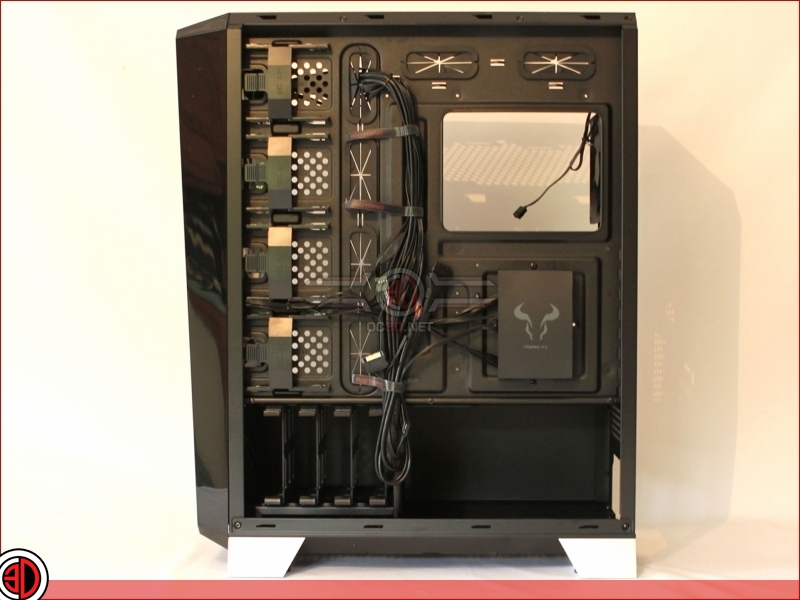 Space wise, there's a good 22mm or so throughout the case, which is plenty even for those who's cable management technique is to lob it all in and cram the panel back on! 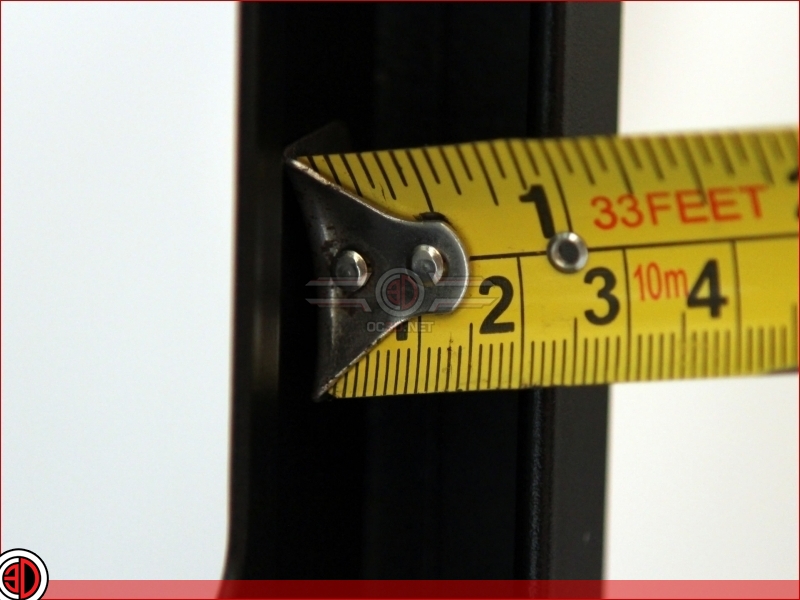 The CR1280 has no less than 4 stealth mounts for 2.5" drives, all of which are mounted rear of the motherboard in a line down the anterior edge of the case. 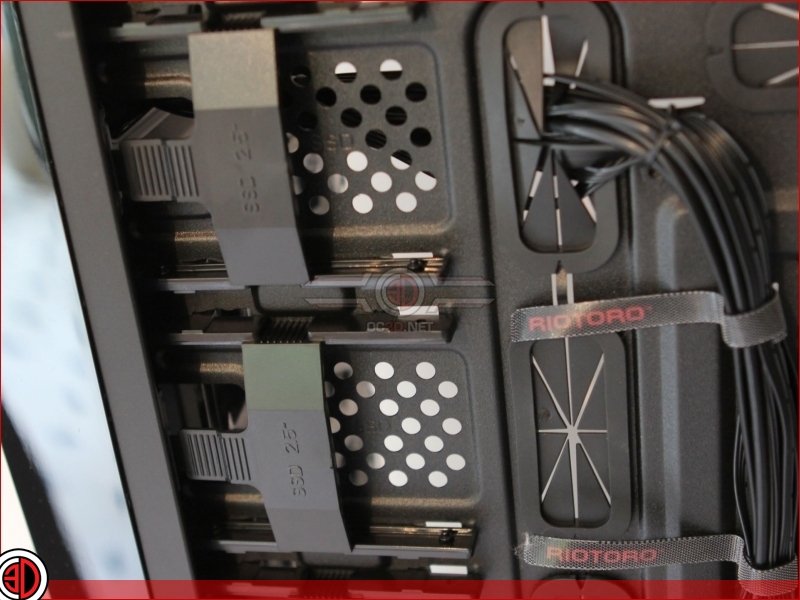 The SSDs clip into plastic holders that then also clip into the case.  For some reason I can't help thinking about a Klingon Bird of Prey when I see these.  That could just be me though. 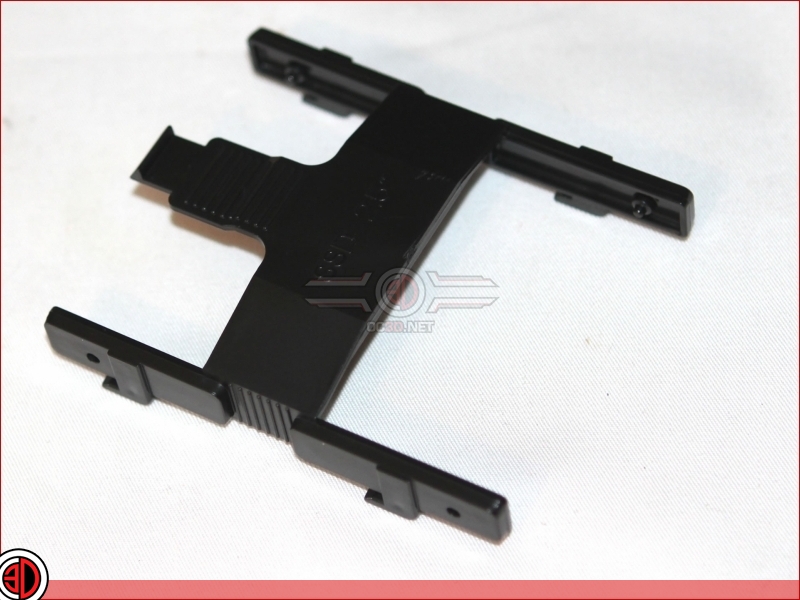 Additional storage is provided on the lower deck by means of a rack of 4 trays for 3.5" drives.  As you can see, these are mounted vertically.  A close examination of the cage reveals that it's riveted in place rather than screwed, so if you want to get it out for what ever reason, you know, like sticking a 360mm rad in the front where it's not designed to go, then you're going to need to pay it a visit with Mr Dremel. 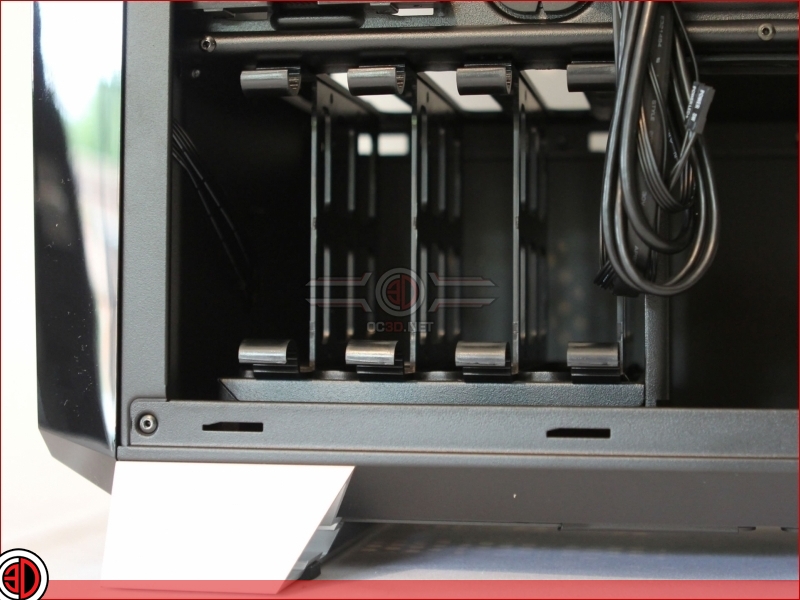 The PSU mount area can accommodate PSUs up to 220mm in length.  They're inserted from the side as seen, and rest on two 40mm long self adhesive rubber pads.  Now, when we first took the side panel off this case we found one of these rubber pads adhered to it.  At the time we didn't know what it was, but when we came to photograph the PSU mount area we realised there weren't any padded supports.  Observing the similarly long trough, and remembering the rubber pad we'd found we put two and two together.  The search was now on for the remaining pad, which we eventually located stuck to the inside of the vent above the PSU.  Take a look back at the second to last image on page 2 and you can just see it peeking down into the PSU cut out.  Now, again, this isn't a biggy, but it does say to us that the chap in the factory who's job it is to stick these down doesn't appear to be that well motivated.  It also says to us that yet again, the quality standards over at Riotoro need to be revisited.  In simple terms, somebody at the factory needs a kick up the arse. 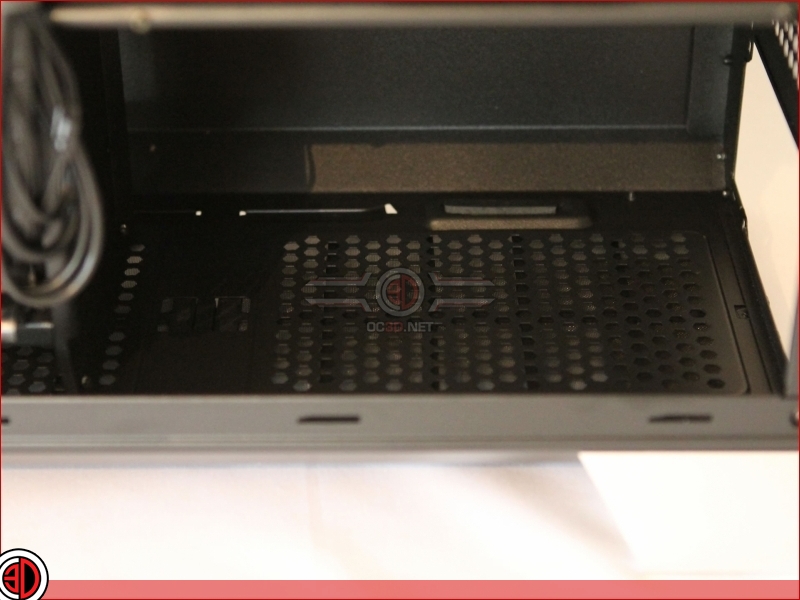 Ello Ello Ello, What do we have here then?  Well as it happens, it's a cover for the fan/RGB controller which nestles beneath, more of which in a minute.  The reason we've shown it though is because it's yet another instance of where Riotoro are failing to tick the quality box.  On the face of it, it's a nice rigid plastic cover that protects the electronics underneath.  However, when you actually touch the cover, or set about the screws to take it off, you realise the plastic that it's made from is thinner than that used to support the average chocolate in a Cadbury's milk tray selection.  Now don't go thinking we're over exaggerating here, to be honest it's that thin, that for while we weren't convinced it was actually plastic, but rather thick paper.  Not card mind, just thick paper.  It has all the structural integrity of a crisp packet, and in our view it would have been better to leave it out.  Granted it does the "logo" thing, but the lack of inherent quality and structural integrity does more harm to the overall feel of the case than it does good. 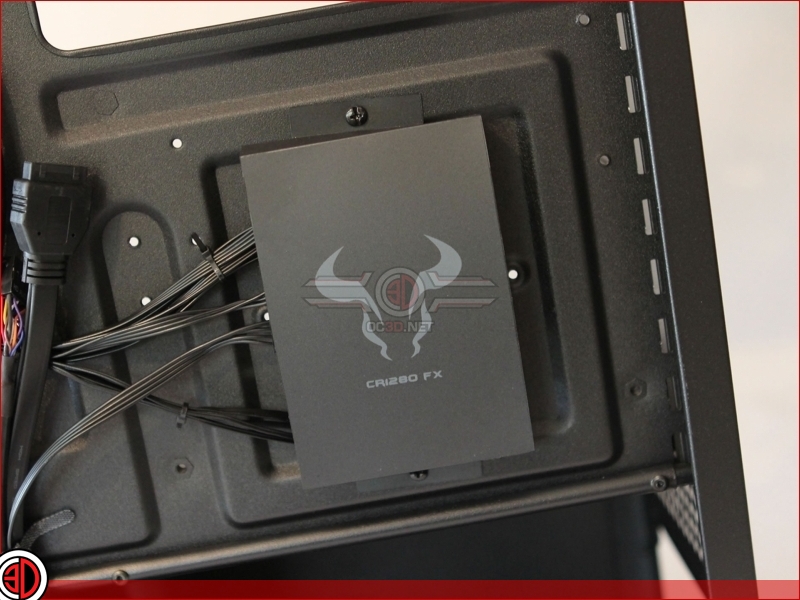 Underneath the mirth cover we find the hardware at the heart of the fan/RGB lighting.  Riotoro say that it can support up to 4 fans, but in their FAQ admit that it may be possible to attach more via fan splitter cables.  Remember though that Riotoro say the whole RGB thing only supports their own fans and products. 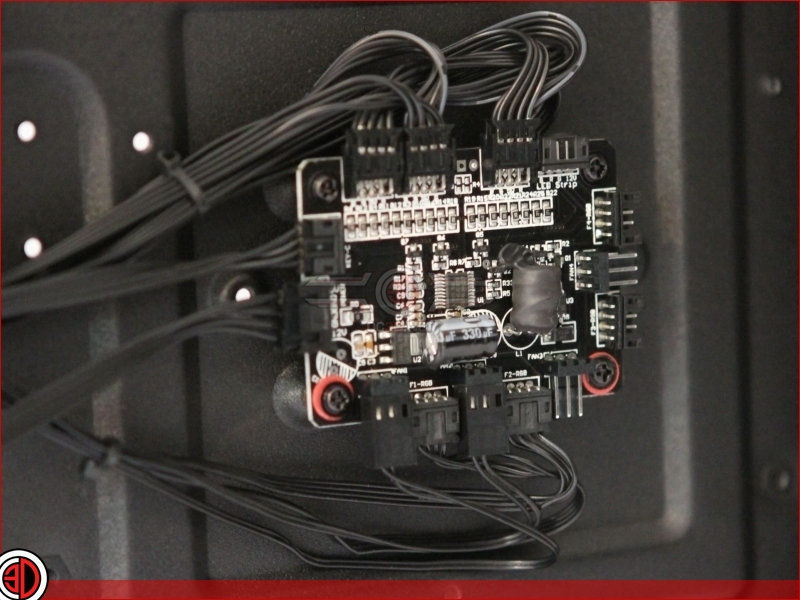 Aside from the side panels, the only part that can be stripped from the CR1280 is the front panel.  Now in some ways this is good, as it means there's not a lot of superfluous crap attached to the exterior, however, in some ways it's not so good as it means that there's not a great deal of flexibility with regards to internal configuration.  OK, so with the front panel removed, the front I/O stays in place, which is always appreciated.  It's worth noting that the front I/O is surrounded by a milky opaque plastic cowling.  This cowling has RGB LEDs embedded within it, and illuminates as per the operator's desire.  We also get to look at the rad and fan mounting options in a bit more detail and see that the CR1280 has a pair of their 120mm RGB units up front 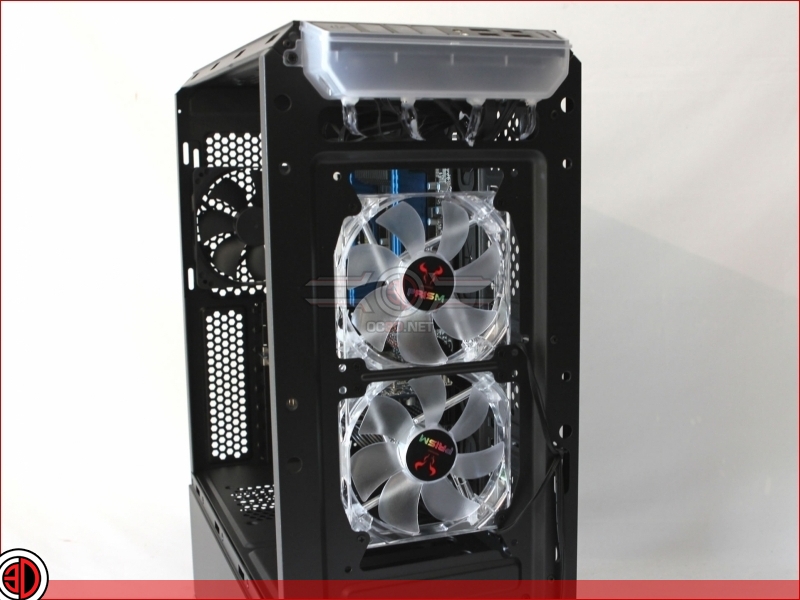 At the bottom of the case we see the two LEDs that give light to the Riotoro logo on the front panel.  As you can see, if you wanted to mod the case to enable the fitting of a 360mm rad in the front, you'd have to lose, or spend a lot of time relocating these LEDs.  We can't help thinking that it would have been better to add some sort of ventilation to this lower panel, and attach the LEDs to the front panel by means of detachable fittings..  After all it is ventilated on the exterior, but there aren't any holes on the bulkhead. 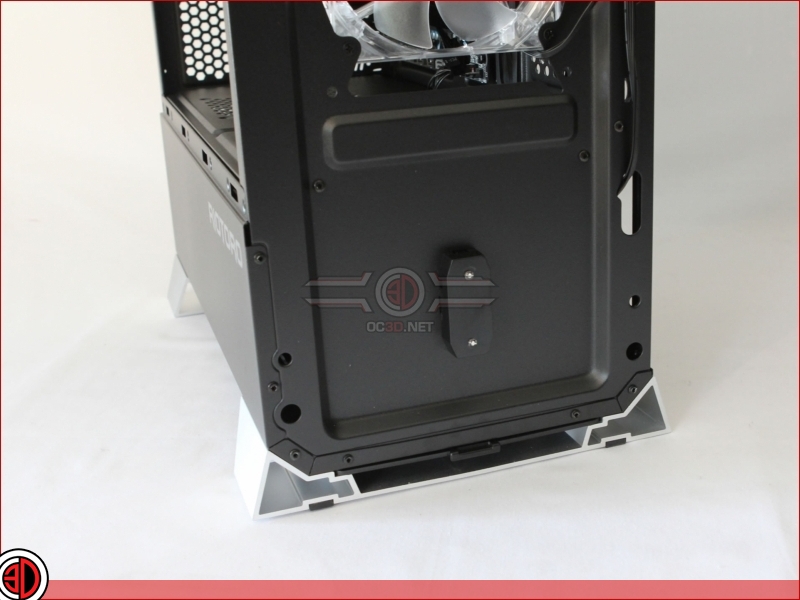